Food and Drinks in Africa 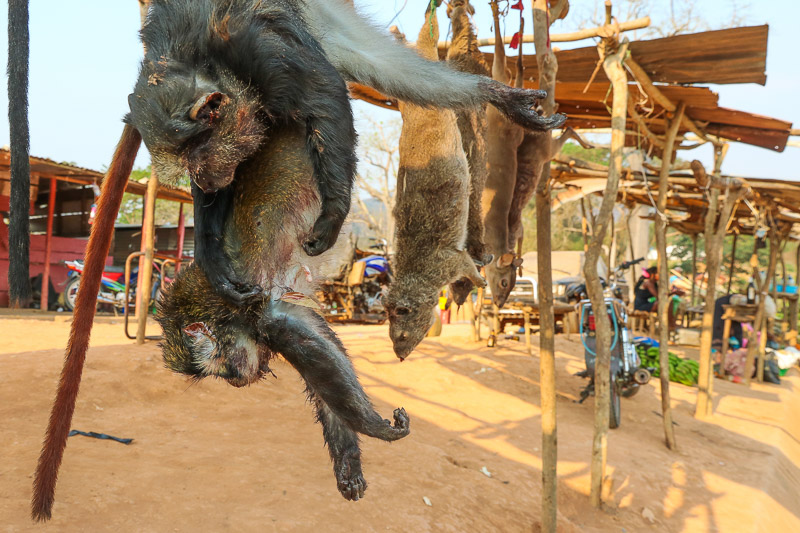 You can buy all sorts of local products along any main road in Angola. Mostly it's just fruit, vegetables and palm wine, but once in a while you come across bushmeat. Anything from rodents to deers and monkeys are for sale and hang freshly killed along the road. They locals don't mind if you want to have a look, but ask before you take any photos.
> More exotic food 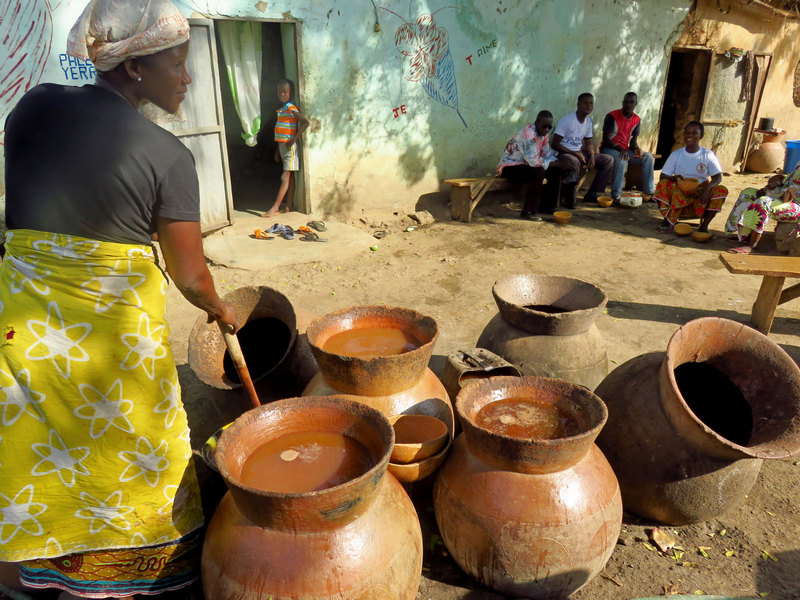 Some Lobi traditions are disappearing fast. Women no longer wear the discs plugged through their lips which used to be so admired; traditional building techniques are giving way to Western-style brick building. However, one highly enjoyable tradition is not going anywhere: the Lobi people's socialising over drinking. Cabarets are often no more than a courtyard with a few benches where women are brewing chapalo and pito – bittersweet millet beer served fresh and lukewarm from the pot in small calabash bowls. Here hours are withered away in pleasant and welcoming conversation, and locals are happy to see foreigners to participate. Both men and women frequent these happy places, which is a refreshing change from Burkina's bars that seem to be men-only. Most cabarets also have some traditional instruments lying around and if spirits are high – they often are – these are brought out in the early evening. Should a break from the millet beer be needed, Gaoua (Ga-wa) town also host a small museum, a big Sunday market and a sacred grove where chickens are sacrificed.
> More drinking 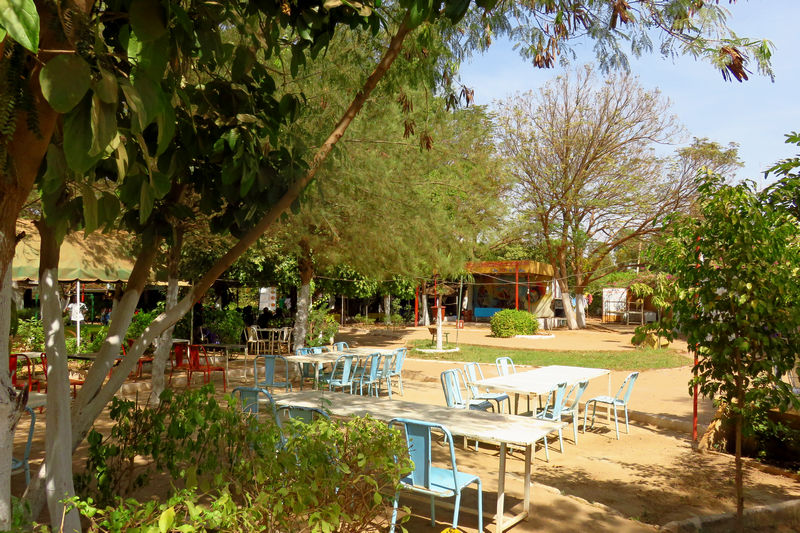 What really makes Ouagadougou a superior experience to many other West African capitals is not merely that it's slightly cleaner. The answer lies in the leafy grounds of the city's many jardins – or gardens. These places are small oases, often hidden behind tall hedges near major intersections, serving meals and drinks throughout the day. Many also have live music playing in the evening. It's entirely possible – and highly recommended – to plan your sightseeing in Ouaga by moving between these watering holes visiting the major sight en-route. Just be careful not to order a large beer at each stop. 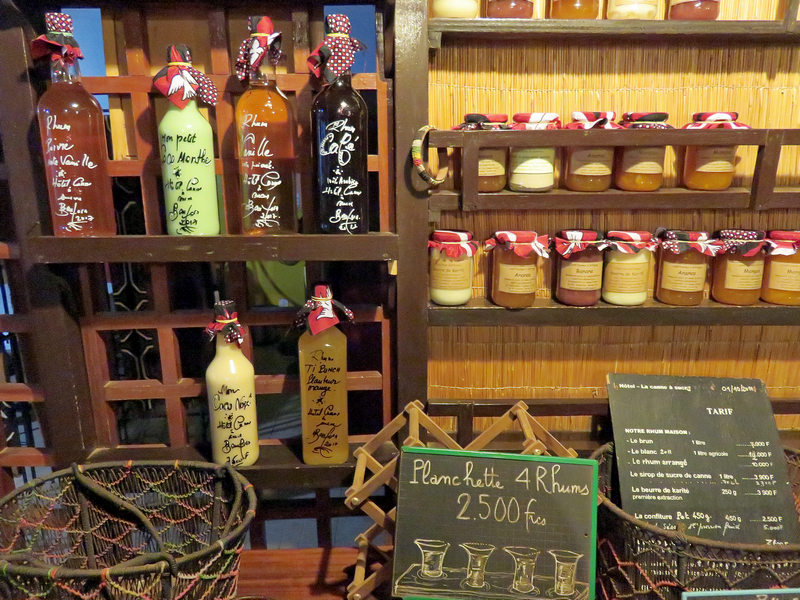 Burkina Faso isn't Cuba or the Bahamas. But no-one seems to have told that to the good people in Banfora. Here they grow so much sugar cane that they are able to cover Burkina's entire domestic needs. Luckily, a few innovative souls have figured out what sugar canes also could be used for, and have thus begun to distill rum. The most prominent of these outfits are the bar at the Hotel là Canne a Sucre, where you can buy a tasting set for less than 4€ - sampling four of their different variants of rum. The Caribbean feeling pretty much ends here, because the rums are very much African creations: including ginger, mint, coffee and mandarin flavoured rum.
> More drinking 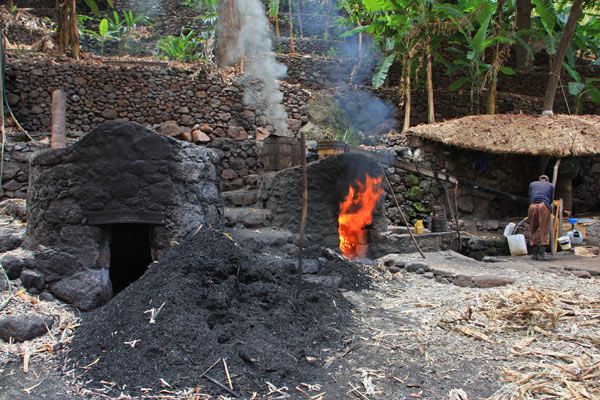 One of the main crops on Santo Antão is suger cane. The cane sugar that is consumed on the islands is however imported from Alagoas, Brazil, because the Cabo Verdeans have a better use for their sugar cane: making Grogue. This often very locally brewed alcohol is a type of rum. When hiking through the villages of Santo Antão, you are bound to run into such a small distillery. The people will happily show you the process of distilling the sugar cane and might even let you try some grogue. First, the suger cane goes through a press to extract the sugar cane juice. The dried sugar canes are eventually used as a fuel for the distillation process.
> More drinking 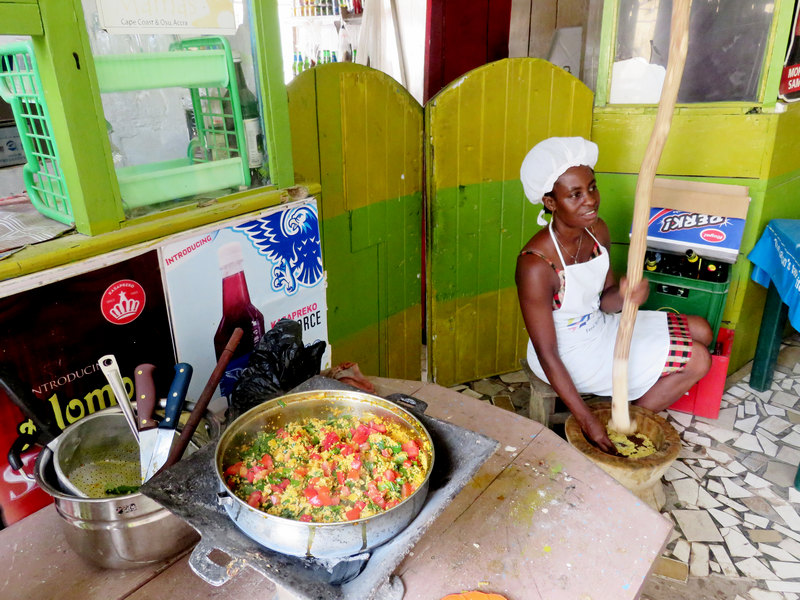 Have you always wanted to eat and cook like a local, or maybe you're simply looking for a chance to get a glimpse of local culture? Wait no longer. In a small restaurant in Cape Coast named Nice'n'Rice, Global Mamas – a local NGO working to improve women's livelihood – has set up cooking classes teaching how to prepare and cook Ghanaian classics like red-red, fufu, fried plantain and more. These dishes are often limited to street kitchens and private homes, so half the fun is eating what you've made afterwards. Classes are informal, informative and fun, and regardless of your skills in a kitchen, your teacher/chef will ensure that the end-result is eatable. 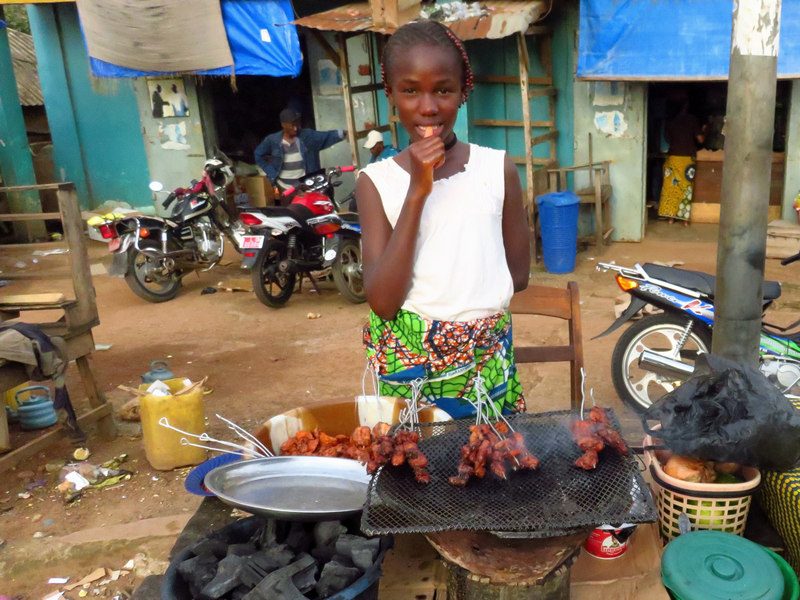 Street food is serious business in Guinea. Upcountry, even in relatively large towns, it can be difficult to find something that can legitimately be described as a restaurant. Instead, grilled meats, called brochettes, and rice with sauce are everywhere. Brochettes comes in "town meat" and “"bush meat" variates - just make sure the bush meat isn't monkey. The sauce poured over the rice is either made from banana or cassava leaves, while a third option is "soup" - a thin meat broth. Both sauces and soups are spiced up with a healthy dose of chilli. In Fouta Djallon millet forms a welcome alternative to rice, but the east has the widest range of options. Potato salads, meatballs, fermented milk, and rice porridge are just some of the dishes on offer here. Usually sold by women carrying large plastic tubs. If desperate for "real" food, track down the classiest hotel in town, whose restaurant can usually rustle up some chicken or beef with fries.
> More exotic food

All over Southern Africa 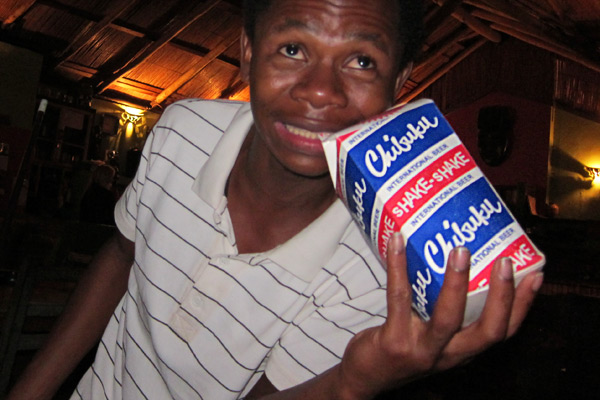 Chibuku is dirt cheap maize (and sorghum) beer cherished throughout Southern Africa. It's sold in paper cartons with easily recognisable red and blue stripes enclosing its catchy slogan "Chibuku international beer shake-shake". The fermented liquid is thick with lumpy bits, so a strong shake-shake is indeed necessary before opening. The first time you come across Chibuku is probably when you see scraps of Chibuku cartons lying around in the streets, giving a hint of where the local Chibuku joint is located. It's theoretically possible to get drunk on the stuff, but chances are your stomack will have had enough before you reach any level of intoxication. But give it a go, it will earn you street credits with the local drunks.
> More drinking 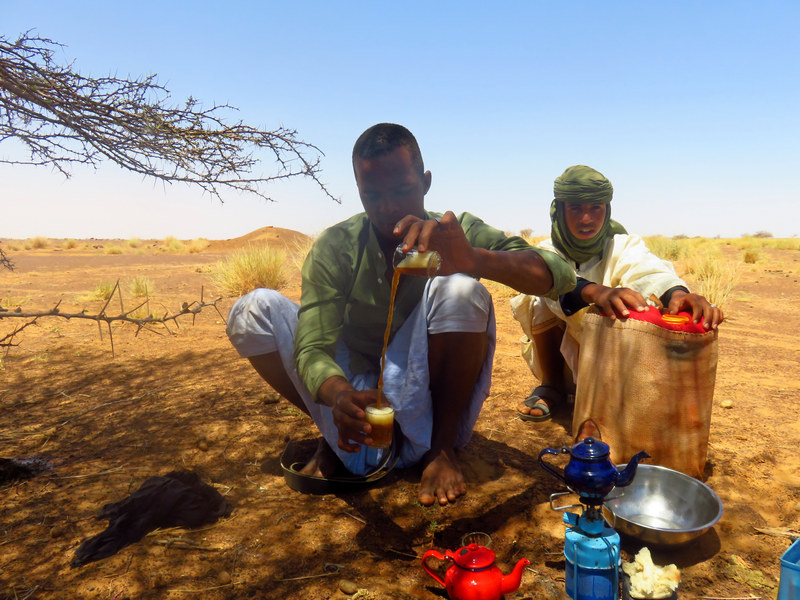 In Mauritania, where alcohol is banned, tea is the fuel for conversation and as such, so it is no small business. Tea will be offered to an arriving guest, a passer-by in front of someone's house or in the middle of nowhere – when the taxi-brousse driver needs a break. But make sure you have the time before accepting a tea-offer. Brewing tea correctly in Mauritania takes no less than 40 minutes and easily more than an hour. Two pots and at least three glasses are required in an endless ritual of pouring the tea between the pots, between glasses and between glasses and pots. Tea here is not one glass, but three. The first strong – this one is for health. The second neither too strong or too sweet – this one is for a life without too many extremes. The last glass you get served is very, very sweet – this one is for love. The glasses large shot-glasses and the upper half consist of white foam made in the pouring process. Drinking the tea actually takes a fraction of the time it takes to make it. The mean time is filled with conversation.
> More drinking 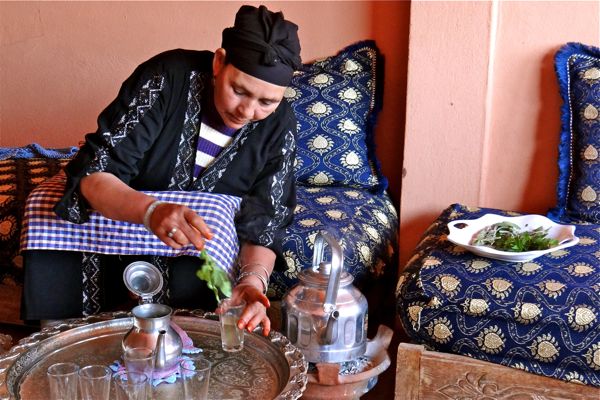 Moroccans are Muslims, so they do not drink alcohol - and alcohol is generally hard to come by. Instead, you are offered everywhere their special mint tea. You can find it at restaurants, if you buy something in the souk, with the Berber people in the mountains and on the market where mint tea dominates. The tea consists of green tea supplemented with a big bunch of fresh mint and sometimes sage. There is a special ritual surrounding the drinking and the way the locals make the tea, and it suddenly becomes quite solemn to drink tea. The Moroccans, however, are very fond of sugar, so be sure to ask for sugar free, if you do not share their sweet tooth.
1 2