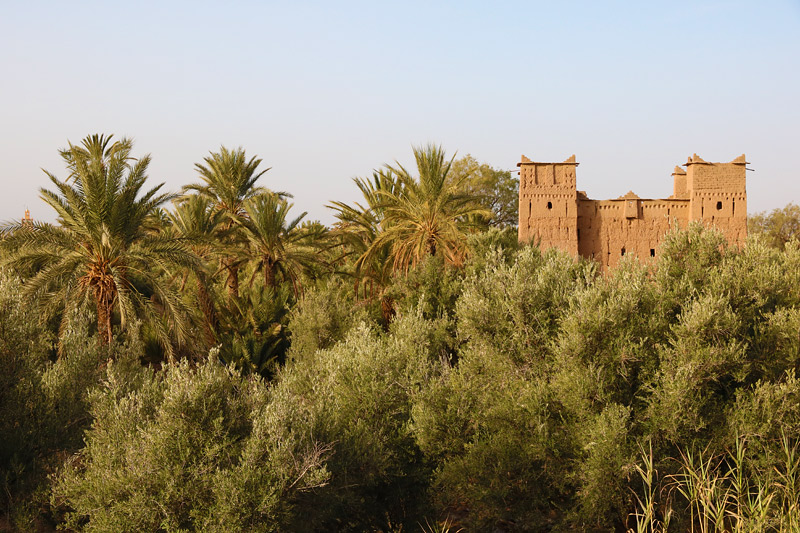 In the flat desert with the Atlas mountains as backdrop lies Skoura, an immense oasis with a deep history. It’s a huge labyrinth of palm groves, fruit trees (almond, walnut, fig, olive, apricot, and more) and vegetable gardens. There several villages within the oasis along with many old kasbahs (fortified mud houses), some falling apart while others have been neatly restored. For centuries Skoura was an important stop on the north-south trading route linking Sahara with the Mediterranean. Today, the oasis makes a fine stop for anyone coming from Marrakech and going east. It’s totally fine to explore the oasis on your own, either on foot, bicycled or car, but it will be easier to find the interesting areas and kasbahs with a guide. Some guides like to point out that the oasis is UNESCO protected, but that is not the case. 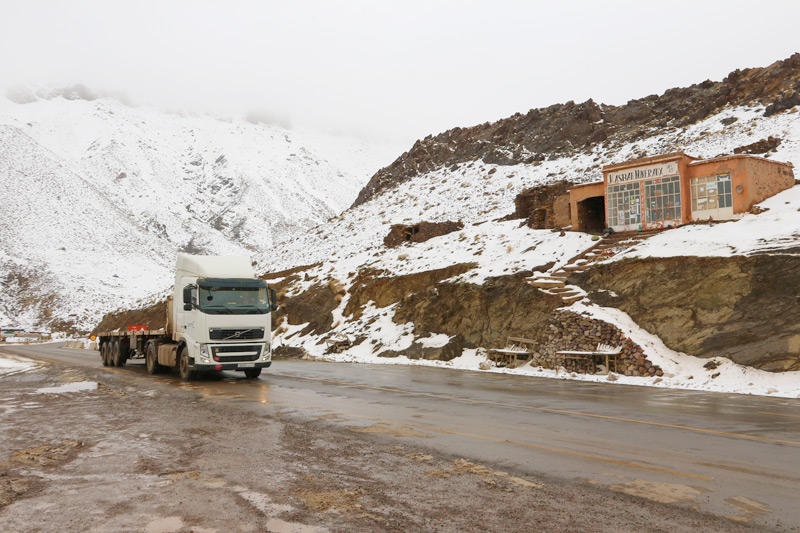 The road trip from Marrakech over the Atlas mountains along N9 is one pretty journey. At first it's all flat farmland and monotone villages, but with snowcapped mountains in the horizon. Eventually, you wind your way through hairpin bends up the Atlas mountains with new panoramic views at almost every turn. The road is in excellent condition and stand in sharp contrast to the mostly scruffy villages you pass on the way. There will be plenty of crystal sellers showing their goods along the way. The road trip literally peaks at Morocco's highest road pass, Tizi N'Tichka at 2260 m. From that point it's just down hill through more spectacular sceneries before it smooth out in the stony desert. The road will eventually lead to great sights as Ait Benhaddou and further afield Todra Gorge, Zizi Gorges, and the sand dunes at Zagora (small ones), Merzouga (bigger ones), or M'Hamid (biggest ones).
> More road trips

Todra Gorge and beyond 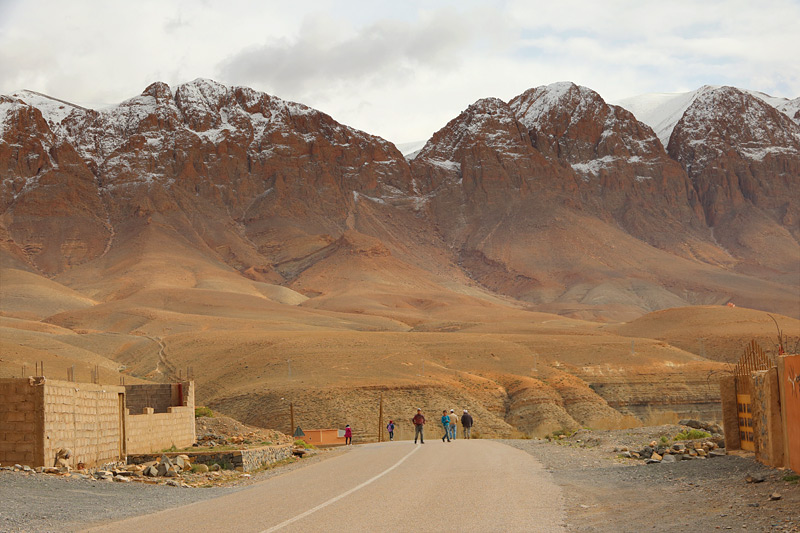 Todra Gorge is a spectacular narrow gorge in orange limestone. Some sections are so narrow that it looks like the tall gorge walls close in above your head. The gorge is popular with both rock climbers and hikers, but the road trip through (and return) is equally rewarding. A sealed road follows the river bed at the bottom all the way through the gorge and beyond. At about 35 km from Tinghir the gorge ends and the arid landscape opens up and becomes mountainous with snow-covered peaks (in winter). Villages from this point are Berber and mostly made up by adobe houses. This part of the Todra Gorge road trip isn't any less spectacular than the first part through the gorge, just very different with elevated mountain roads and wide views. Along with Dades Gorge, Todra Gorge is one of the best road trips (for 2WD) in whole Morocco - and that tells you something.
> More road trips 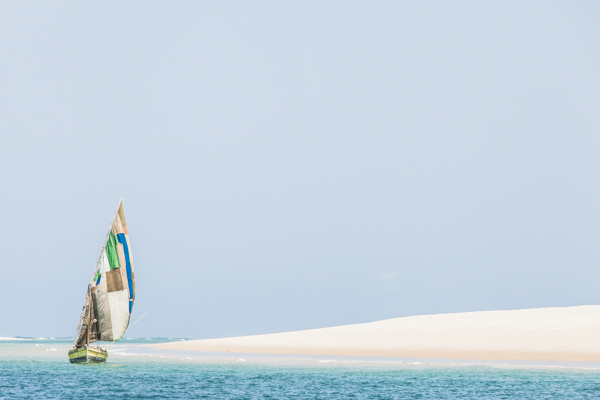 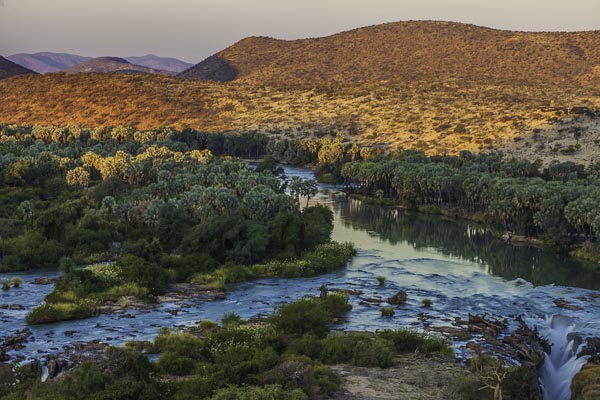 The road to Epupa is long and dusty, and it is difficult to imagine anything but more dust and rock at the end of it. So when the green riverine valley that contains Epupa appears beyond the crest of a hill, its lushness makes it seem almost surreal. Epupa itself is a ramshack town, with a few camps and some tin houses. The Cunene River is the lifeblood of the region, and rafting trips are one of the most popular activities for visitors. The river also forms the border to Angola - it is possible to visit an island in the middle of the river, which a sign proclaims to be part of Angola. A few hundred metres downstream from the village are the Epupa Falls, a breathtaking series of waterfalls best viewed from the hilltop just west of Epupa. This also provides the best view of Epupa village. Guided tours will be offered to visitors, but are unnecessary - it is an easy walk to do on your own. Epupa is inhabited primarily by the Himba, who most likely attract more tourists than the falls do. This part of Namibia is a true wilderness, and the rewards of making this journey are well worth the effort.
> More waterfalls

In a country famous for its striking scenery, Fish River Canyon still stands out. The second largest canyon in the world by most accounts, watching the sun rise or set over its main valley must be considered a highlight of any Namibian journey. For those with more than a few days to spend, mule trails follow the Fish River and make for an unforgettable experience. Wildlife, such as kudu and springbok, has recently been released in the reserve and can now be spotted with relative ease. The area beyond the canyon is coloured red by the iron content of the sandstone and dolorite, which - when contrasted against the normally bright blue sky - makes for a memorable sight. But the canyon itself is doubtlessly the highlight of a visit to this part of the country, and even a short stop at the main viewpoint is well worth the journey. 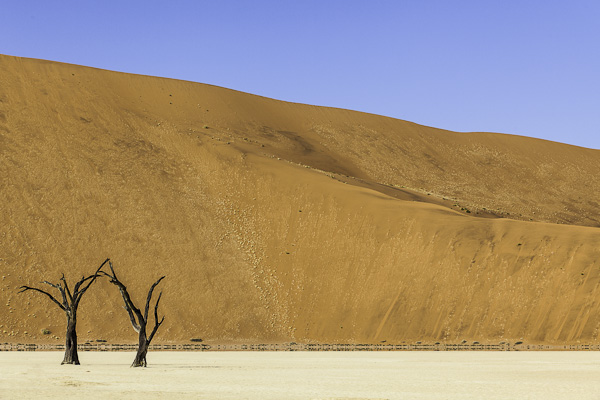 The most famous section of the Namib Desert, and one of the few places where the public has access to the famous red dunes, Sossusvlei and Deadvlei ("vlei" simply means "pan") are two of Namibia's biggest tourist attractions. A number of the dunes can be climbed, providing views across the red sea of sand. But equally striking, and sublimely surreal, are the stark contrasts provided by the dead trees, light ground, red dunes and blue sky at Deadvlei itself. It is a hostile and stark environment, but closer observation of the sand reveals the tracks of many small desert dwellers, and grass hugs the slopes of many of the dunes. The desert is best visited in the early morning or late afternoon, when it is cooler (but make sure to bring plenty of water anyway). Note that although rare, this park occasionally floods. That - and strong winds - can result in the roads becoming impassable and conditions generally unpleasant. Equally unpleasant to some might be the huge crowds of people that flock to see these dunes, particularly during winter. The only way to avoid this is to stay inside the park, as this allows for earlier access to the dunes. Ostrich and oryx, able to survive in this extreme environment, can be seen on the 60 km drive from the park gate to the parking area. This section of the Namib Desert is without a doubt a must-see for all visitors to Namibia.
> More deserts
> More UNESCO World Heritage Sites, Africa 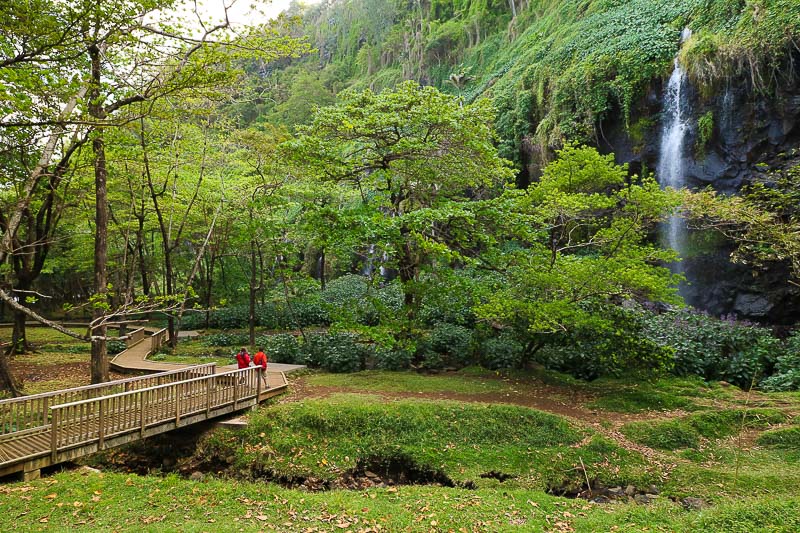 Anse des Cascades is a black rock beach flanked by a vertical mountain wall, where narrow waterfalls cascade down and run into the sea. Fishermen have their small boats lined up on the nearby ramp. Judge by the number of parking spaces, Anse des Cascades is a popular site for locals and tourists alike. There is a single restaurant and a small snack stand, else the shady coconut grove is favoured as a picnic spot.

When the volcano erupts, the lava flows towards the sea. Thousands of years of eruption have created a barren moonscape of lava, which is called Le Grand Brûlé. Once in a while the area is expanded, when the lava choose to reroute its course to the sea. The vegetation will then slowly reestablish itself until next eruption. The more black the lava field is, the younger it is. Some of the youngest lava flows are from the big eruption in 2007. There are viewplatforms along the road, which cross the Le Grand Brûlé. 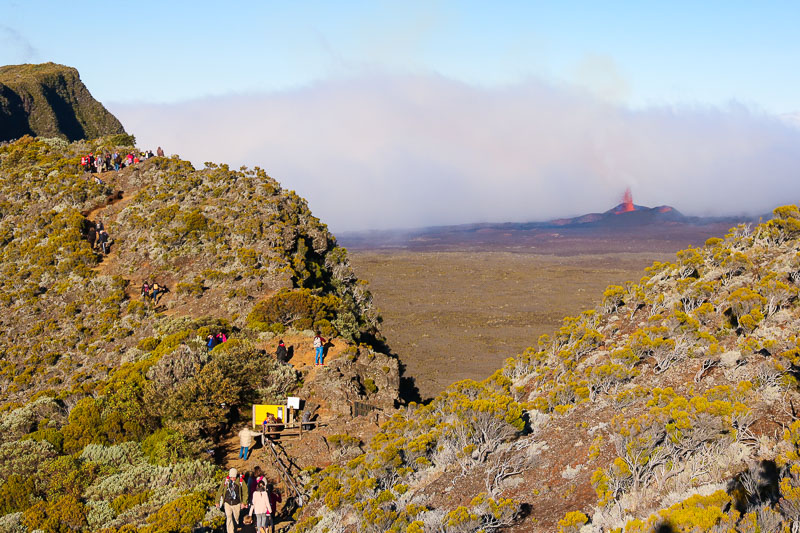 Réunion's most famous - and only active - volcano is Piton de la Fournaise. Every second year or so it erupts, but it's impossible to predict. The outer crater is easy accessible, as you can drive all the way to the car park and viewpoint at Pas de Bellecombe (2311 m). The road is winding and narrow, but otherwise in good condition except for the last 4 km, which is a dirt road across an eeri moonscape. In the non-active periods it's possible to hike across the bottom of the outer crater and up to the viewpoint Balcon du Dolomieu (5 h return). During eruptions it's possible to see the spewing lava and lava flow either from the distance from the car park at Pas de Bellecombe or get closeup by walking along the outer rim to the viewpoint at Piton Kapor (3h return). If the volcano is erupting, come in the early afternoon, bring warm clothes and expect traffic jams up to the car park at Pas de Bellecombe.
> More active volcanoes
1 2 3 4 5 6 7