Food and Drinks in Asia 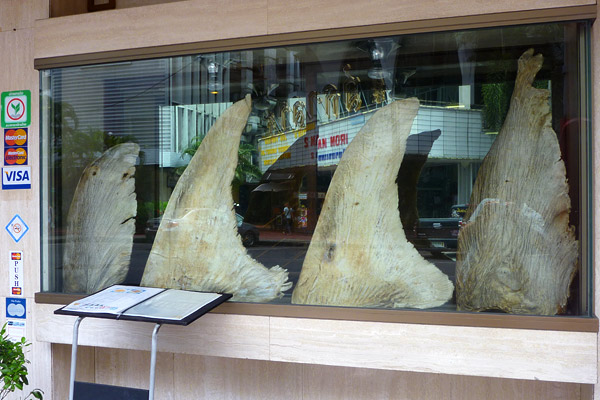 Do not eat shark fin soup... your dick will fall off!!!

No seriously, the shark fishing industry is totally unsustainable, so please just say no.
> More things NOT to do

All over Central Asia 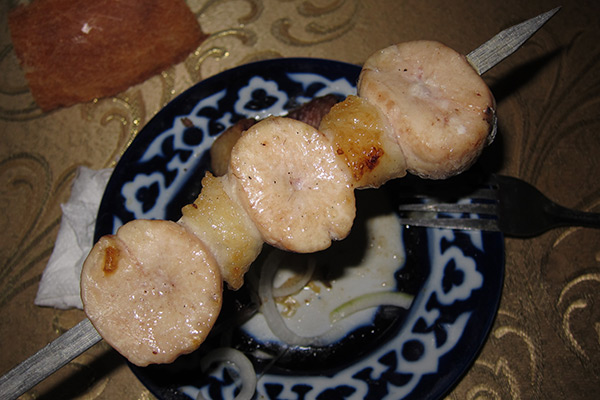 Mutton (sheep) is the meat of choice throughout Central Asia. At the butchers you will see all parts of the animal; head, legs, fat, intestines... and, yes, the testicles. They are sliced and served as shashlyk (kebab spear) like any other meat. And how do they taste? Well, you better try yourself.
> More exotic food 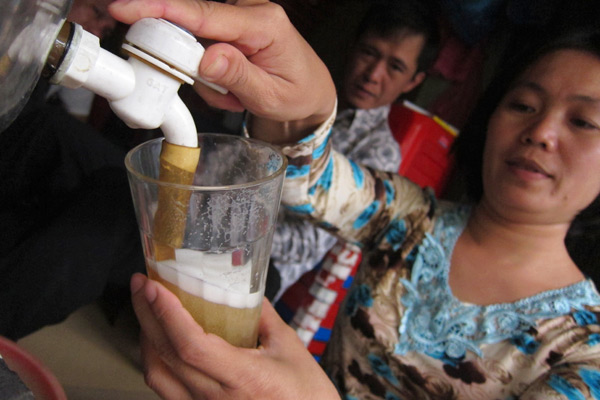 Bia hoi is fresh brewed beer tapped from barrels. A big glass costs 2000-5000 VND (less than 25 cents) so it is no surprise that Bia hoi is popular throughout Vietnam. It is mostly served at street bars where customers sit on small plastic chairs on the sidewalk. A popular place for Bai hoi in Hanoi is "Bia Hoi Corner" at the intersection of Ta Hien and Luong Ngoc Quyen in the Old Quarter. Here travellers rub shoulders with locals while watching the chaotic traffic of scooters, cyclos, street vendors and disorientated tourists wizz by.
> Hanoi guide 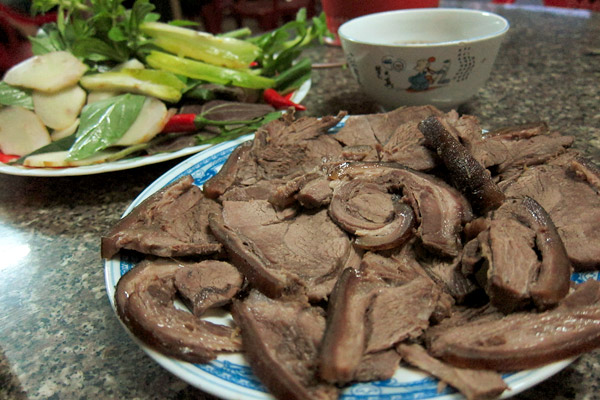 Dog meat is a delicacy in Vietnam and something you eat while sharing a bottle of rice wine with good friends. It is found in specialised roadside restaurants advertising thit cho (in North Vietnam) or thit cay (in South Vietnam). The taste of dog meat is, as you would expect, not particularly unusual, but the purple fermented sauce, mam tom, that it is served with, has the most disgusting smell. So all those dogs you see in cages on motorcycles are probably not on their way to a good home.
> More exotic food 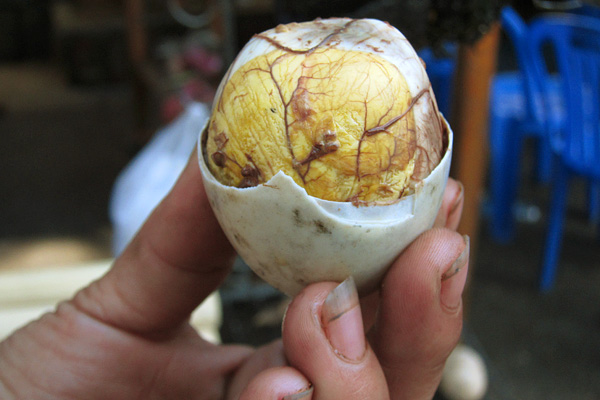 Eggs are always a popular snack in Asia, especially in Northern Vietnam. More desired than ordinary eggs, are the lightly blue eggs with nearly-developed embryo inside, so-called há»™t vá»‹t lá»™n. Normally it is duck eggs that are half-hatched, i.e. fertilized but only partway incubated. Some have embryos that are in a very early stage, while others have almost fully developed embryos with feathers, soft bones and beak. Though the taste is not very different from an ordinary egg, the texture might put you off.
> More exotic food 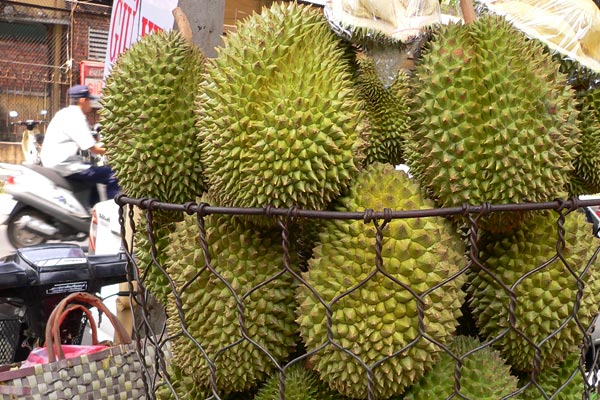 The dangerous spiky durian fruit is probably the fruit most people have an opinion about, those who know it. The smell from an opened durian is so intense, foul and nauseating that many places through Southeast Asia have a ban on eating them in public. The taste, on the other hand, is very sweet, with a buttery texture (some will call it disgusting). It is no wonder that Asian people say the durian smells like hell and tastes like heaven. Try small bits in the beginning and work you way up. If you are hooked, you can even indulge on durian candy, durian icecream and durian chips - and even durian flavored condoms in Indonesia.
> More exotic food 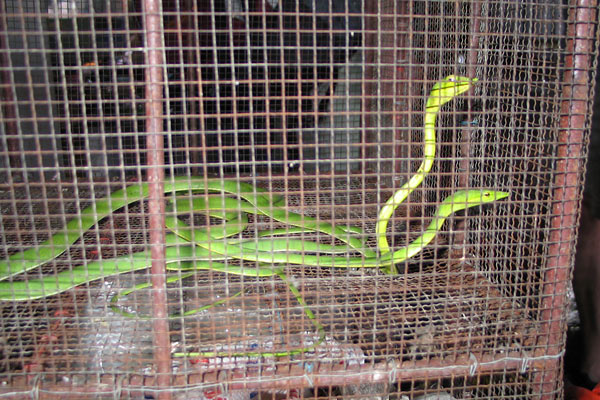 The Mekong Delta is where the Mekong River flows into the sea through a maze of side rivers. It is the most fertile region in Vietnam and the relative small area manage to produce half of Vietnam's rice production along with a overwhelming range of vegetables and exotic fruits. The markets in Mekong are therefor packed with colorful fruits like rambutan, dragon fruit, mangosteen and of course the smelly pointy durian. But the people in the Mekong are also known for their taste for, well, pretty much anything. Frogs, snails, turtles, rats, snakes, scorpions, you name it. If they can catch it, they eat it. So the local market in the trading town of Vinh Long can have the feeling of a zoo but don't be fooled, everything here is for consumption.
> More exotic food 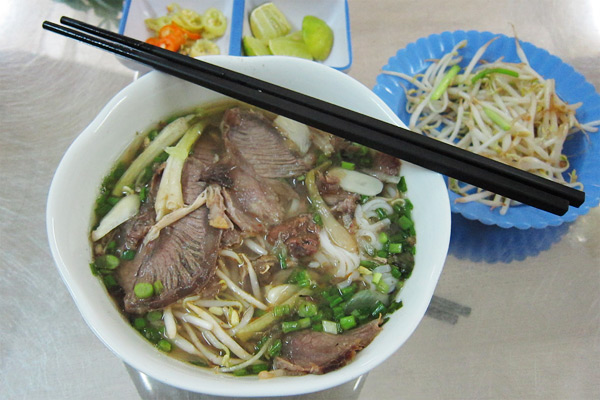 Phá»Ÿ is Vietnamese noodle soup. It is served all over the country and considered Vietnam's national dish and has its origin in Hanoi. Every region, or even city, have their own version of this yummy soup and, of course, all claim their combination is the best. The most popular versions are either with slices of beef (phá»Ÿ bÃ²) or chicken meat (phá»Ÿ gÃ ), but more exotic versions with intestines, chicken feet or whatever are also often on the menu. Though phá»Ÿ is mostly eaten as breakfast (especially in the north), it can be bought throughout the day and is a favorite for a late night snack. It is served plain with rice noodles and then it is up to you to add fish sauce, chilies, lime, greens and herbs.

The picture shows a phá»Ÿ from Saigon. 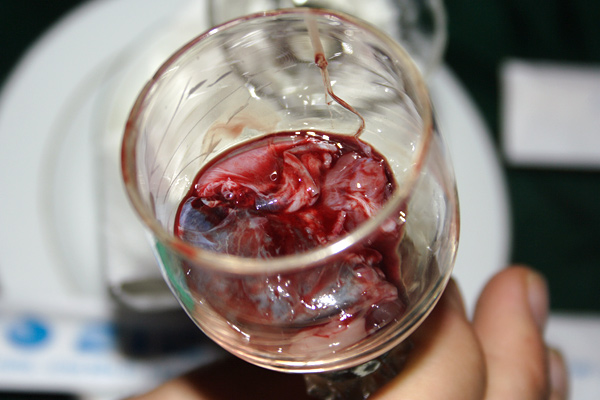 There are restaurants in Vietnam that specialized in snake meat. Here you can pick your own snake from a cage. The handler will then bring the snake alive to your table, smack it in the head and slice it open. The blood will be drained into a glass with rice wine and then served to you, along with the heart which will still be pumping. The rest of the snake will be brought to kitchen, where it will turn into several snake dishes, like spine soup and snake skin cracklings. Every single bit of the snake is used and it is believed that each part have some health improvement properties, like eating the pumping heart will give strong sexual powers.
> More exotic food
1 2