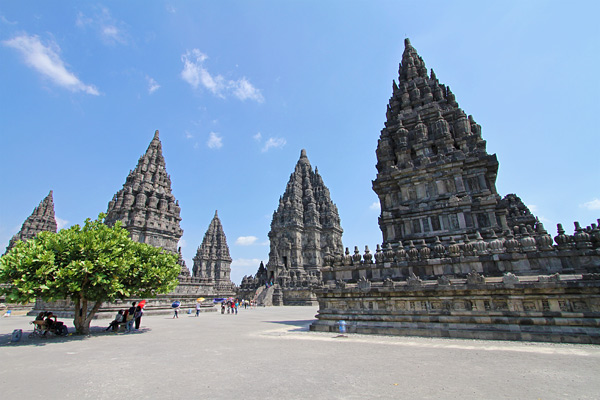 Yogyakarta is blessed wth two amazing temples, the famous Borobudur and the lesser known Prambanan – both UNESCO World Heritage Sites. Not much is known for sure, but both are believed to have been built in 9th century, Borobudur as a Buddhist temple and Prambanan as a Hindu temple. For back in the days, Java was ruled by two dynasties, one Buddhist and one Hindu. The Prambanan temple complex consists also of minor outlying temples, many just as rubble, but the main one stand grand with towers as tall as 147 metes. Prambanan has been hit by earthquake and volcano eruption several times throughout history, latest in 2006, but as been restored again today. You can visit Prambanan on a tour in combination with Borobudur.
> More amazing temples
> More UNESCO sites, Asia 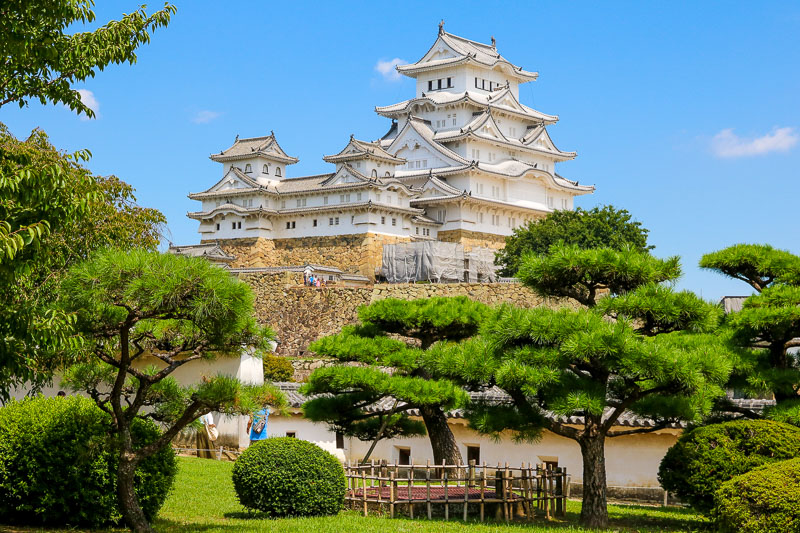 This elegant and well preserved hilltop castle is Japan's finest example of a real shogun castle. It dates from 1333 and was one of Japan's first UNESCO World Heritage Site. It has never been damaged by earthquake, fire or even war (though Himeji city was heavily bombed during WWII). However, recently it underwent extensive restoration for many years, and now stands (almost) immaculate. All six floors of the main keep can be visited, but its beauty is best enjoyed from the distance on the expansive castle grounds. Himeji Castle is a major cherry blossom spot, which attracts even bigger crowds during the short blooming season.
Don't forget to visit Kokoen Garden next door (buy the combined ticket).
> Honshu guide
> More UNESCO sites, Asia 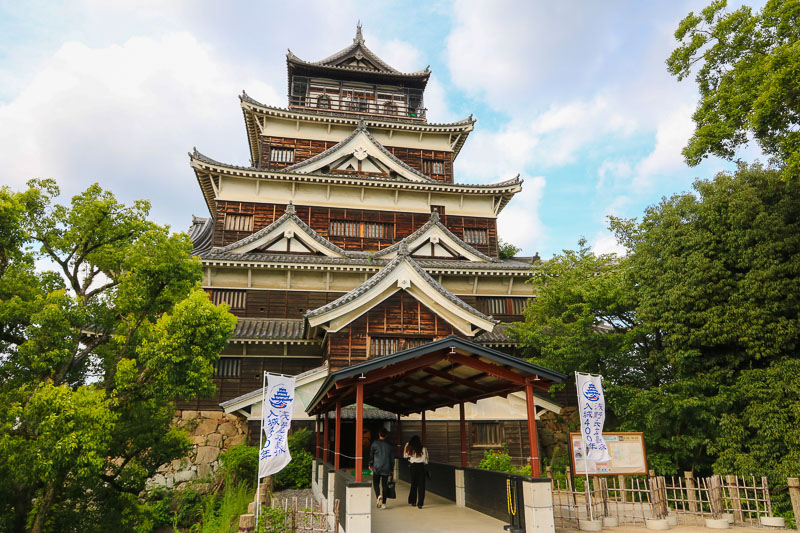 Hiroshima Castle is another Japanese shogun castle. It stands on the flat plain as opposed to a hilltop, but with the usual moat with koi carps. There is also a shrine within the castle grounds. From the outside it looks as pretty as Himeji or Matsuyama castle, but when you enter the castle, you see the difference. It's constructed in modern materials, because the original castle was destroyed by the atomic bomb in 1945. The castle you see today was built in the 1950s with laminate flooring, so you don't need to take off your shoes. There are, of course, impressive panoramic views over Hiroshima from the top floor.
> Honshu guide 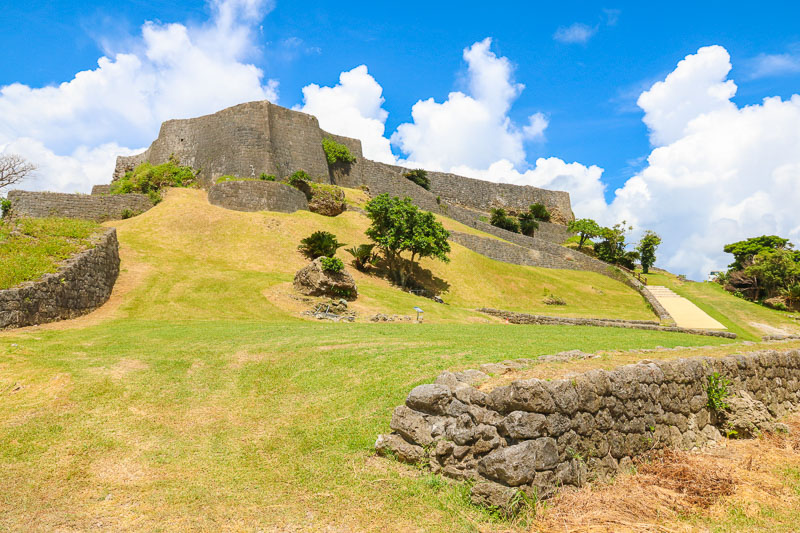 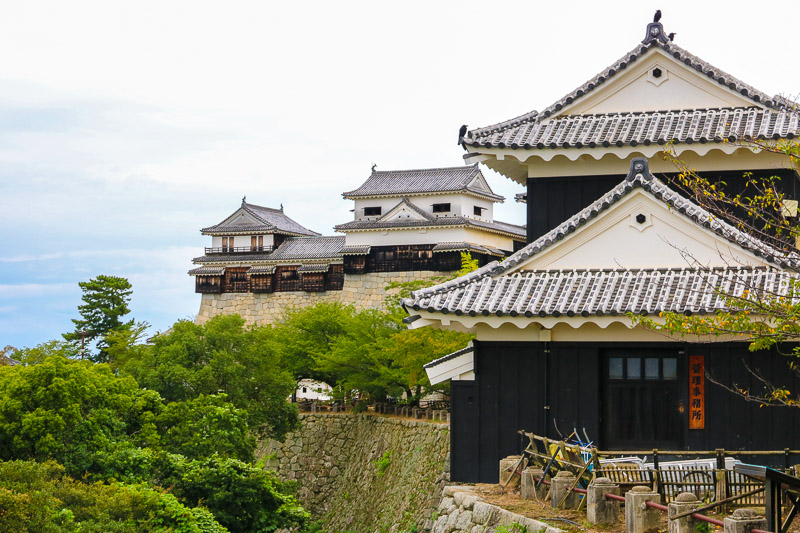 Matsuyama Castle is another fine example of a shogun castle. It was constructed in the early 17th century on a steep hill, which today grants it panoramic views over Matsuyama city in all directions. The original five story castle got hit by lightning and burned down in 1784. The current three story castle was built in the early 19th to replace it. The well-kept castle is particularly known for its precise stonework on the foundation. The inside offers more amazing views over the city and some displays with samurai swords and armors. It's interesting to see how small they must have been during the Edo period.
As the castle grounds are home to hundreds of cherry trees, it's a popular cherry blossom spot.
> Shikoku guide 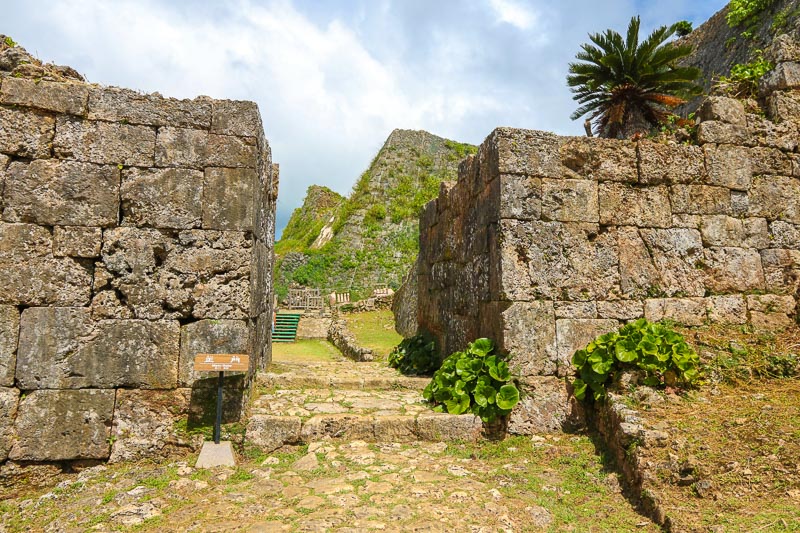 The ruins of Nakagusuku Castle (built in the early 15th century) are another of Okinawa's UNESCO enlisted Ryukyu sites. It's perched on a hilltop and the curved lines of the stonewalls follows the natural rocks neatly. But the biggest attraction isn't the location, it's the overgrown state. Like many of the other castle ruins on Okinawa, only the stonewalls stand, but here plants and palm trees have had a chance to grow to give the ruins a wild feel. Cobbled pathways lead to new corners and a walk up on the walls will constantly offer new vantage points of the castle ruins. Nakagusuku certainly has a feel of lost world, which the other more manicured Ryukyu castle sites lack.
> Okinawa guide
> More UNESCO sites, Asia 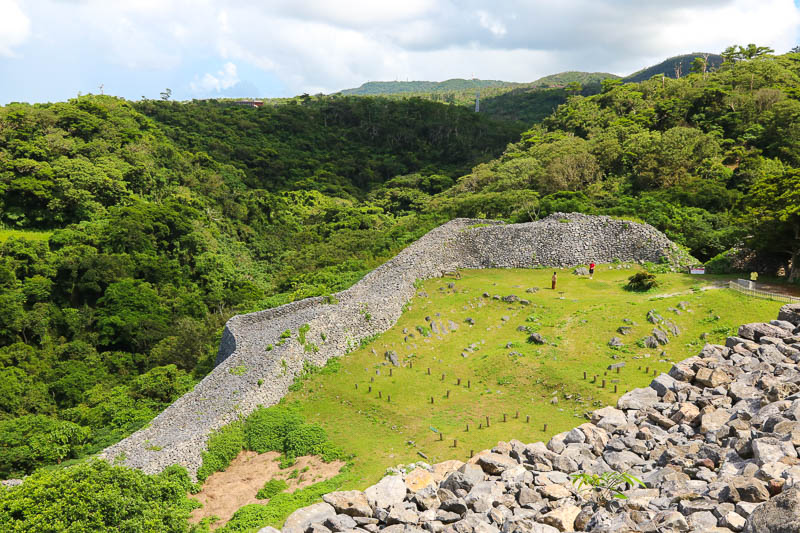 Okinawa has several castle ruins, which are united as one UNESCO World Heritage Site. They date back to the Gusuku period (12th-15th century), when Okinawa was ruled by three kingdoms. Nakijin Castle was built in the late 1200s and were the castle for the northern kingdom, Hokuzan. In 1416 the Hokuzan Kingdom was invaded by the middle kingdom, Chuzan, which then went on to unify Okinawa in 1429, as part of the newly established Ryukyu Kingdom.
Today the castle ruin is known for its rebuilt outer stonewalls, which gives a good picture of how big the castle actually has been, but the rest is left to the imagination. It's surrounded by lush forest and with splendid views the northern part of Okinawa and the East China Sea.
> Okinawa guide
> More UNESCO sites, Asia

When the kings of the Ryukyu Kingdom weren't at Shurijo Castle, they spent time here in the royal garden. It was constructed in the 18th century in a blend of Chinese and Japanese landscape styles with ponds and bridges (since Okinawa was trading with both Japan and China at the time). The garden was completely destroyed during WWII, but has since been neatly rebuilt, and is today a part of the UNESCO World Heritage Site, which also includes the Gusuku castles and ruins around Okinawa.
The shady royal garden will come as a much needed break from the fierce sun, if you come during the hot summer months.
> Okinawa guide
> More UNESCO sites, Asia 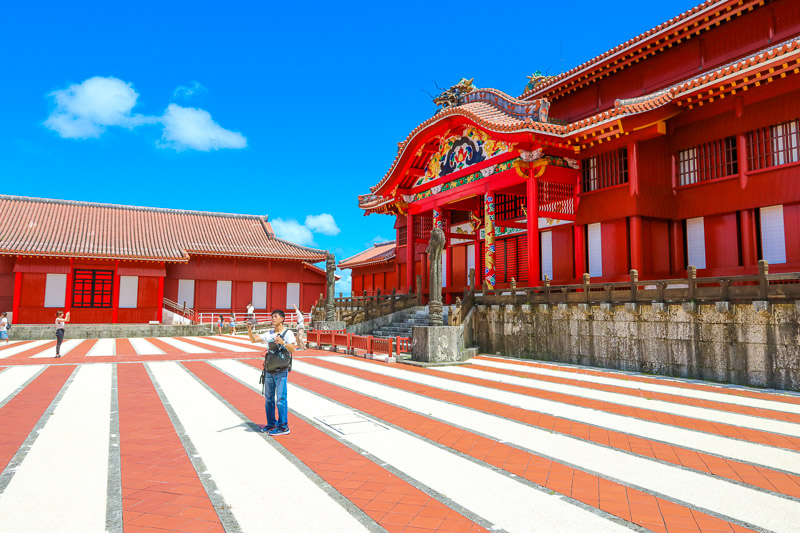 Shuri Castle is not a ruin, but a fully reconstructed castle with manicured walls and colourful wooden buildings - even the caretakers are dressed in historic costumes. Shuri was the capital of the Ryukyu Kingdom. The original castle was built in the late 1300s, but wars and fires had it destroyed multiple times over the centuries. The current reconstruction is from 1992 and the new buildings are actually rised above the original ruins to protect them. Parts have been rebuilt in the original style, while others are more museum like.
Many consider Shuri Castle to be the crown jewel of the UNESCO World Heritage Site, which also includes other historical sites on Okinawa from the Gusuku period (12th-15th century).
> Okinawa guide
> More UNESCO sites, Asia 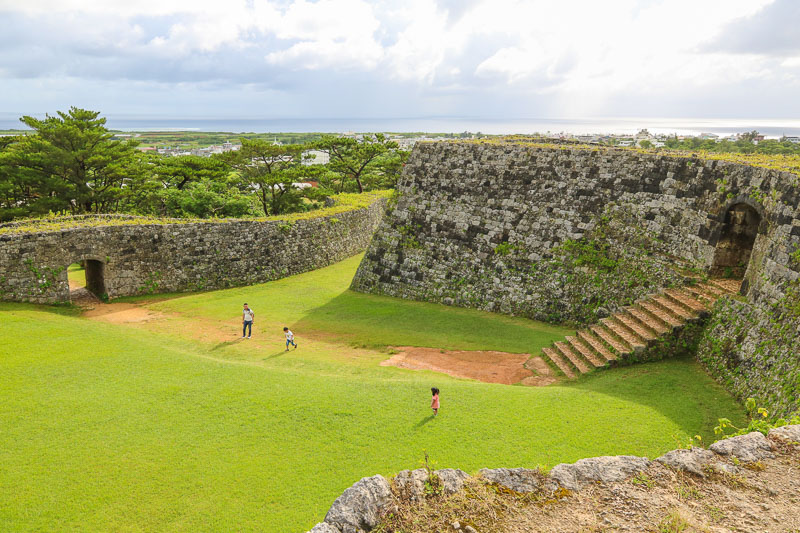 Zakimi Castle is another castle ruins belonging to Okinawa's UNESCO enlisted Ryukyu sites. It was built in the early 15th century and is nested on a hilltop among pine trees. The neatly restored limestone walls have patches of plants growing on them, but otherwise it's a very manicured site. The interior can even seem a bit dreary with outline of a single building and green grass elsewhere. However, the stonework going into the two arched gates are truly impressive (apparently the first on Okinawa to use a keystone). You can walk on the massively wide walls, which offers splendid views of both the site and the outside area.
> Okinawa guide
> More UNESCO sites, Asia
1 2 3 4