Cultural places in Australia and Pacific 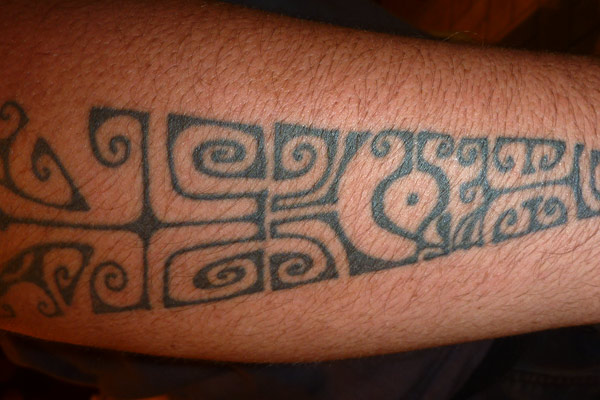 Tattooing is again popular through out the Pacific after the missionaries tried to stop the practice a half century ago. On Tahiti they (Tahitian as well as the French) stick mostly to traditional Polynesian style made up of black patterns, though you will see the occasional heart or eagle. Though the fashion tattoos today, made with a modern tattoo-gun at one of the tattoo studios, are the most esthetically to look at, there is just something authentic about the elder's old and faded pieces that easily fill out a whole leg or back. These were made by hand with the use of crude tattooing instruments by repeatedly tapping a stick with a row of needles into the skin. So when you get tired of looking at the turquoise sea, turn your eyes to the walking skin art in the streets.
> More body art 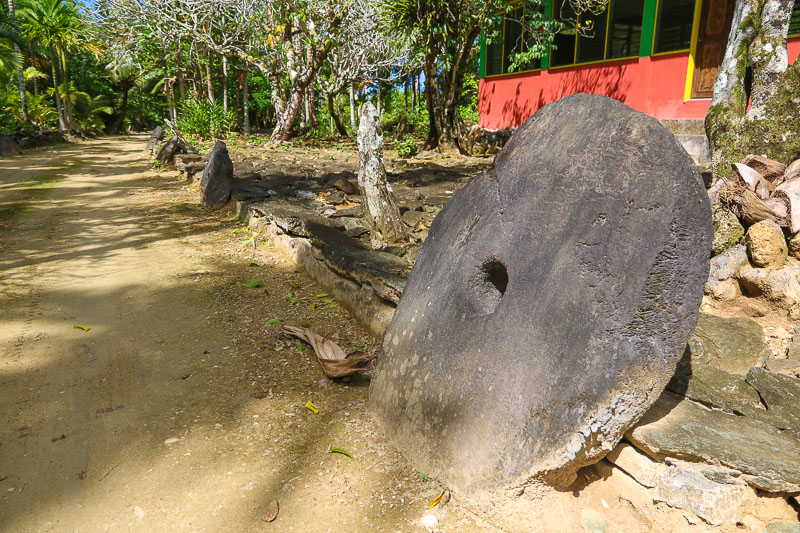 This stretch of road has several sites, the first one is Gal stone money bank and stone path. The collection of money stones is impressive, though not as big as the one at Gilman further down the road. Mala'ay Sunset Park is a few miles further down on the same road.
> Yap guide 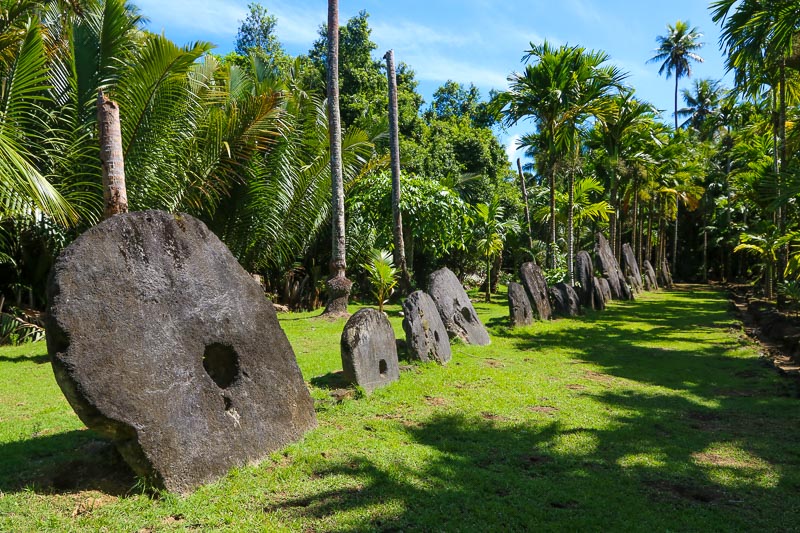 This is one of the biggest and most impressive stone money banks in Yam. There are stone money in all sizes and the biggest is taller than a man. Many are lined up along a grassy path. There is also a pathway of limestone. There is a sign at the main road, but from there you have to navigate the small backroads yourself. However, both Gilman and Gal stone money banks and Mala'ay Sunset Park are on the same road.
> Yap guide 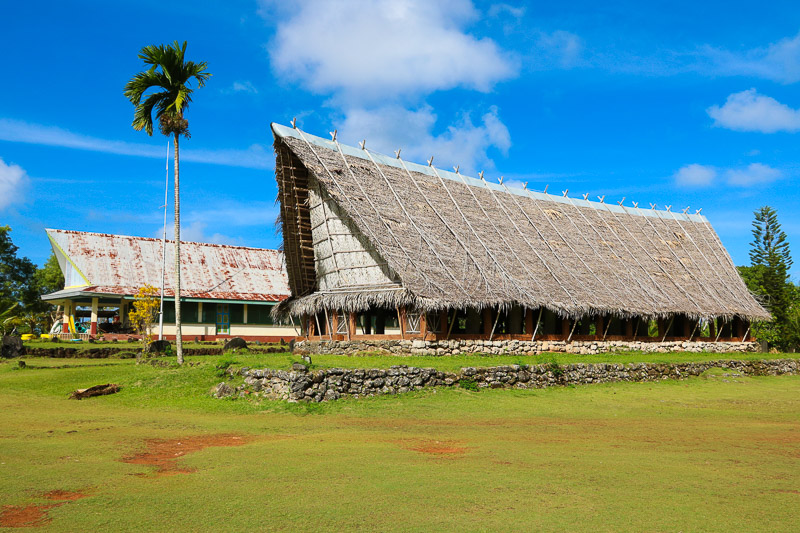 The sign at the road only states WWII memorial site, but the location has two interesting things. The first is the memorial for George O. Beall Jr. (and other brave men), who was killed in action in 1944. There is an information board explaining how it happened. The second thing is a nice surprise, a traditional Men's House with a stone money bank. Again, it can be hard to find, but there is the usual little sign at the road.
> Yap guide 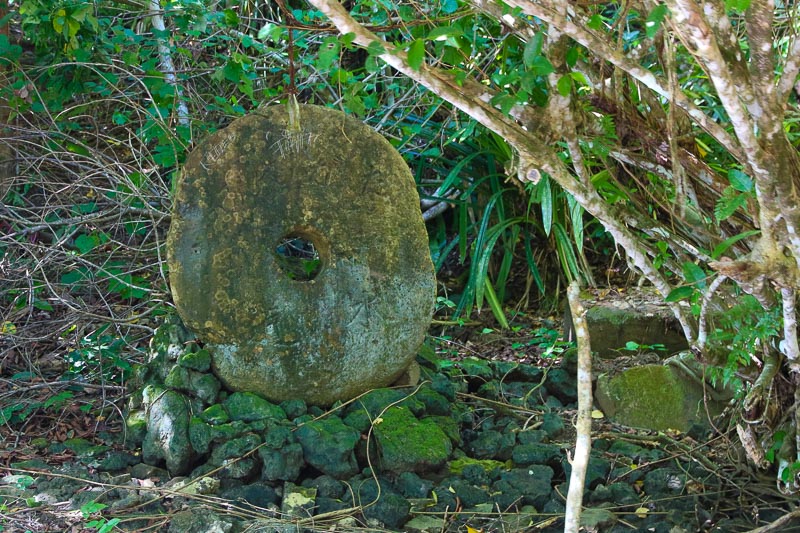 Yap is a very traditional place, but not all traditions have been kept. From ancient times they have used big stone money, so-called Rai. Disks carved out of limestone (some from Palau more than 400 km away) with a hole in the middle. The biggest is 3.6 m, while the smaller ones are about 0.5 m. The most perfectly shaped are the newest ones, since they have been carved with better tools, but it doesn’t necessarily reflect a higher value, since it’s the effort and unique history that has been put into the stone money, which decide its value. Since the stone money are too big to be relocated, when they change ownership, they just stay where they are. Each village has a so-called stone money bank and since every exchange is public, everybody knows who owns what (very much like virtual currency today). And people don’t have to live in the same village as the stone money bank. Stone money are (of course) no longer used as currency in Yam, but the locals still exchange them in traditional ways, like when buying land, settle disputes, or maybe getting a wife.

This stone money is placed fairly remote in the woods close to the bridge over the German Channel. You can either reach it by road or you will pass it on a dive tour to the manta sites of Mil Channel and Stammtisch, since the dive boats use the shortcut through the mangrove forest.
> Yap guide 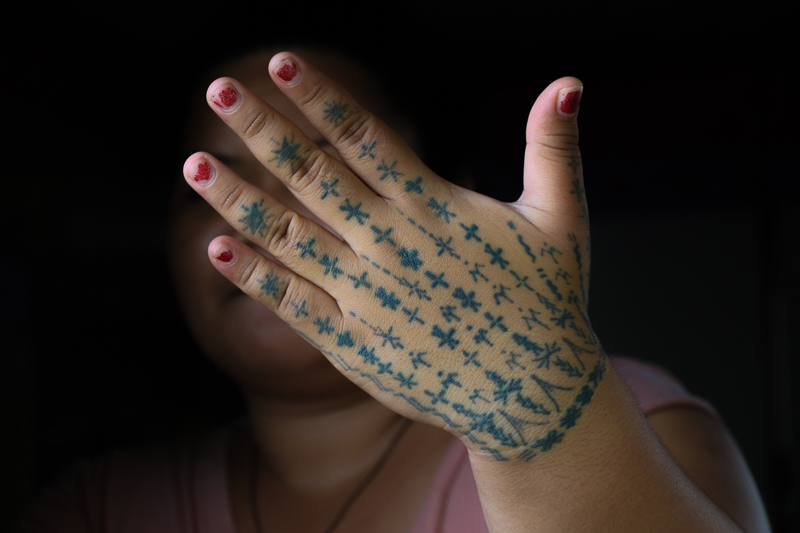 Samoa is a nation of tattooed people and fortunately many still prefer the traditional black style. The most recognisable tattoo is probably the male pe'a, which cover from waist to the knees. But you see every kind of tattooes on both men and women; hands, full legs, and backs, however no facial tattoes. Every tattoo means something and is made to commemorate life events. A traditional Samoan tattoo is made by hand, no tattoo-gun, with an angled stick which has sharpened bones or boar teeth. The ink then gets injected by continuously hitting the stick with another stick. The international word tattoo actually comes from the Samoan word tatau.
> More body art 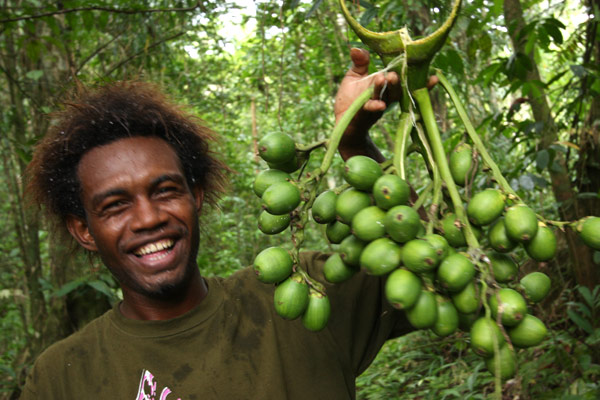 Betel nut is an innocent looking nut, but when chewed with crushed coral and mustard stick, it works as a mild stimulant – which strangely also generates blood-red saliva that stains everything including the teeth. Most locals chew betel nut unless their branch of Christianity has managed to ban it. Many shops and offices have signs banning the chewing of betel nuts on the premises and in Honiara they even try to minimise the disgusting red spit splashes by encouraging the use of spitting boxes (used cardboard boxes). Yummy. If you give it a try, do not expect any effect besides a headache the first couple of times - and you have to be pretty persistent to keep trying.
> More ways to get high 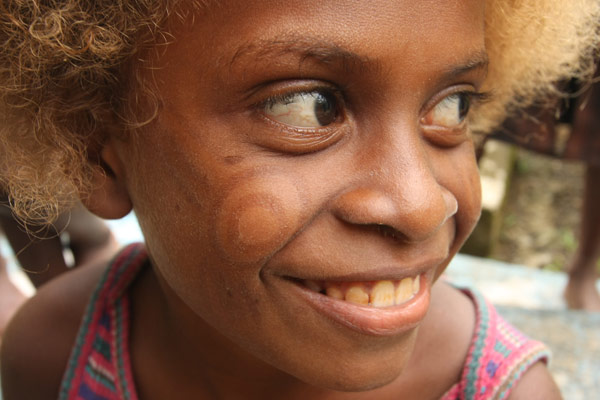 In the not-so-old days of tribal warfare, the tribes of Malaita fancied a bit of head hunting. To be able to distinguish friends from enemies, they practised facial scarification as a means of tribe identification. Each tribe had their own design made up of circles and lines which were cut into the cheeks of infants. When they grew up, the marks would smoothe out and leave discoloured facial patterns. Though the Christian missionaries have managed to ban the head hunting, some people of Malaita still perform facial scarification with the ancient patterns. And it still looks really cool.
> More body art 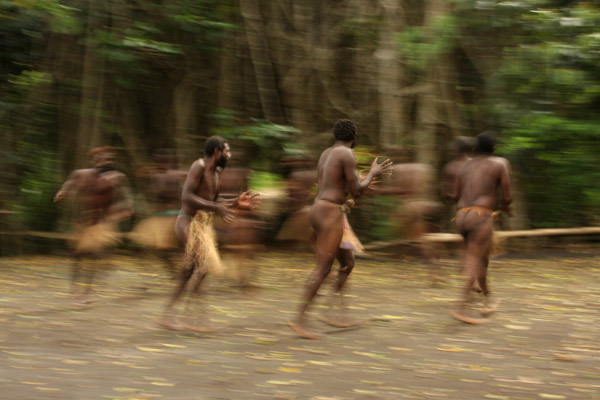 The people of Vanuatu are not shy to show you their way of life. A visit to a Kastom village will no-doubt involve some traditional dance, like the Namba dance on Tanna island. The chief will call the men together by banging the tam-tam, and soon after they will all appear buck-naked with only a bundle of leaves, a so-called Namba, covering their private parts. They will clap, sing, jump, and stamp their way through the tribal dances right on the dirt under the canopy of a giant banyan tree. It is an amazing performance to watch and has a refreshingly authentic feel to it, far from those tacky tourist shows you can see elsewhere in the South Pacific.
> Photo gallery
> More tribes