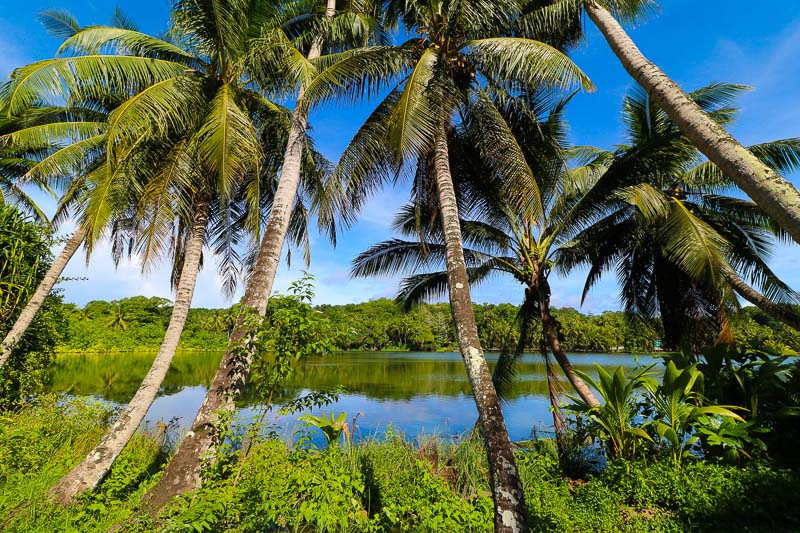 Nauru is surprisingly green and lush. A particularly lovely and shady patch is the inland lagoon of Buada. A beautiful deep green lagoon surrounded by a few houses, but otherwise high grass and tall palm trees. It's always possible to find a place in shade, something that is highly valued in hot and humid Nauru. 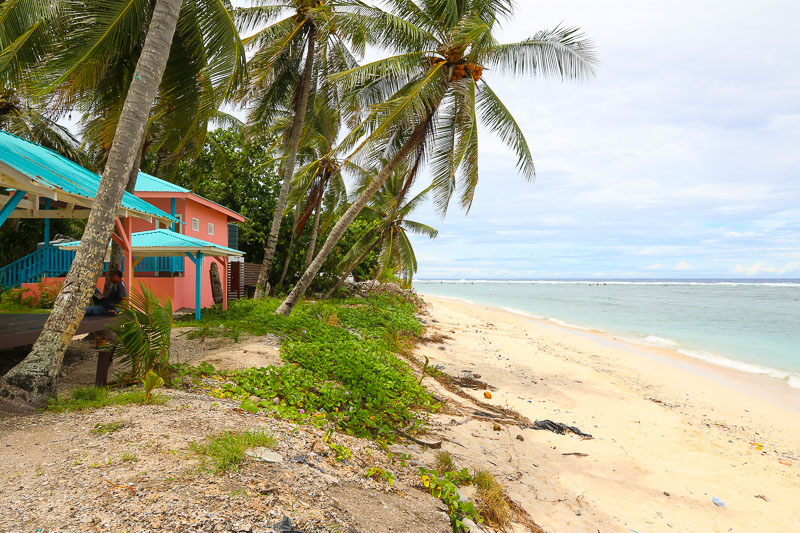 Right across the road from the Capelle shopping complex (supermarket, cafe and a few other shops) is the Ewa Beach Park. The palms are picturesque and the picnic huts shady, but the beach isn't the best. 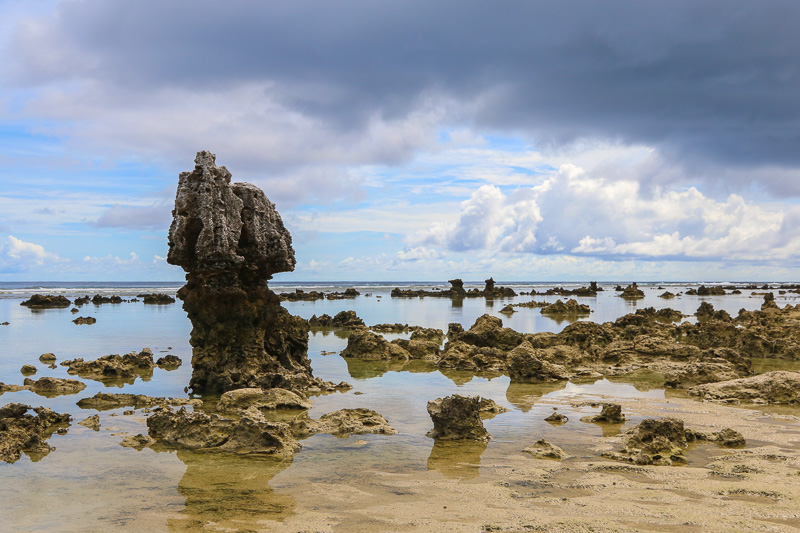 The shore of Nauru is not just dotted with tall palms. The rough coastline has some dramatic looking limestone formations, some many meters tall. At low tide you can walk dry footed around them, and at high tide you have to be careful not to step on them barefoot (hurt like shit), the reason why the locals prefer to swim at other places like the harbour at Anibare. 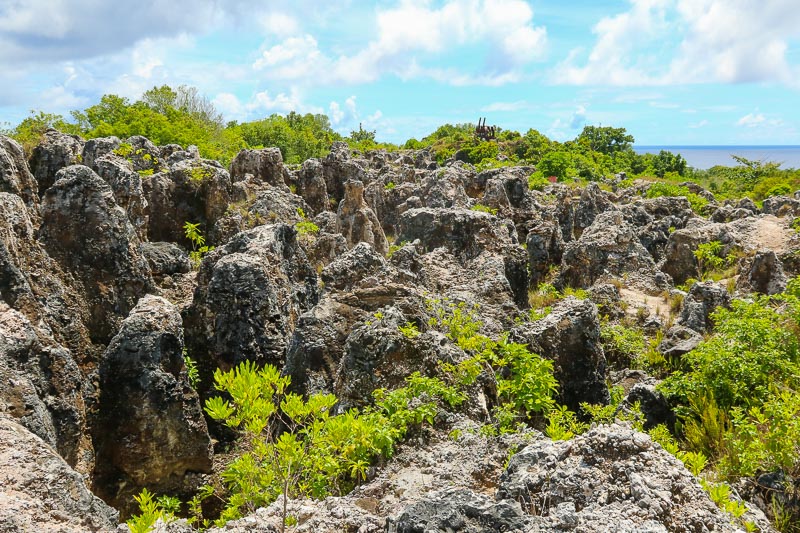 The trail leading to the Japanese gun from WWII, will take you through a spectacular landscape of jagged coral pinnacles and deep depressions. It's a result of phosphate mining, where the surface soil was scrapped off before the phosphate was removed from the below ancient coral. Today, it's a huge labyrinth, where it's easy to get lost as you walk and scramble from pinnacle to pinnacle. For directions, see Japanese Gun from WWII.
> More trekking 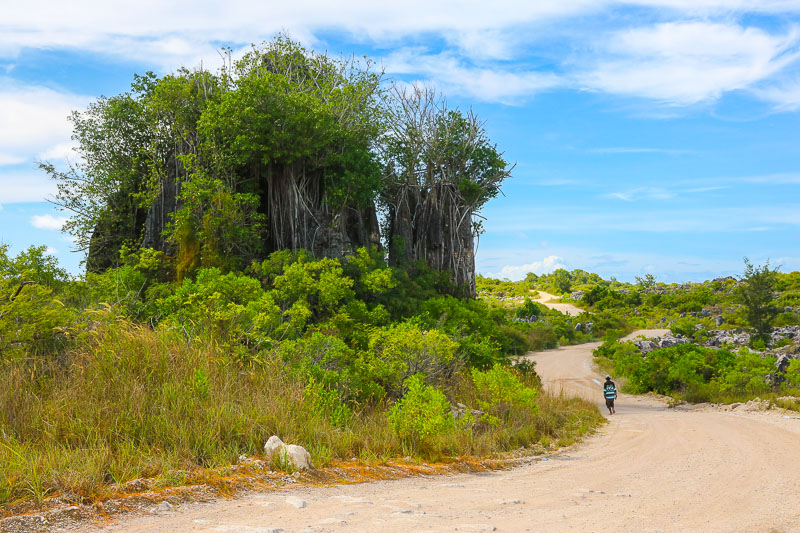 Phosphate mining used to form the backbone of the Nauru's economy, but their deposits has been exhausted, though some mining still exists. The closed mines have turned the interior of Nauru into an enormous labyrinth of the remain standing tall coral pinnacles, some exceeding 10 meters. The striking man-made lunar landscape is sadly an environmental disaster, as nothing can grow here. The locals call the interior for the Topside, and it's here you can find this big boulder known as The Rock. 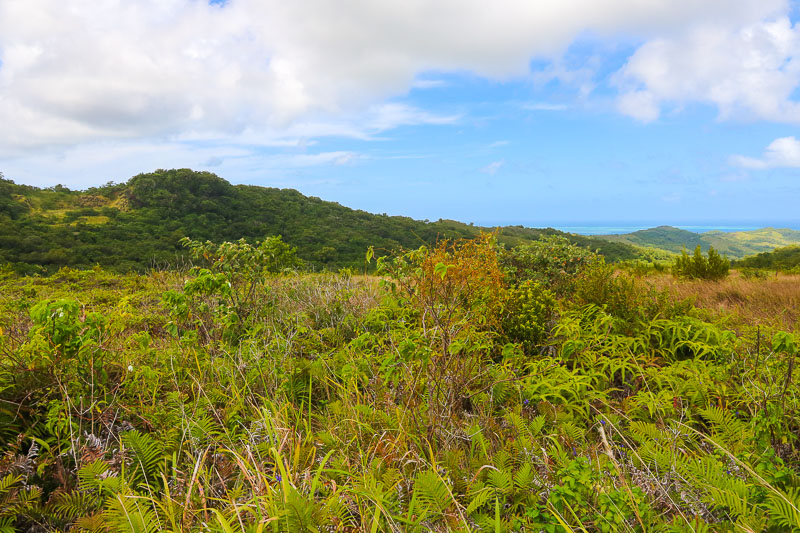 Palau highest point is the summit of Mt. Ngerchelchuus (217 m). There is a turn off at the road, where a sign says Mt. Ngerchelchuus. From here it looks like an easy hike, but we never ventured up to the top, as the view was already good enough for us.
> Babeldoab Island guide
> More trekking peaks 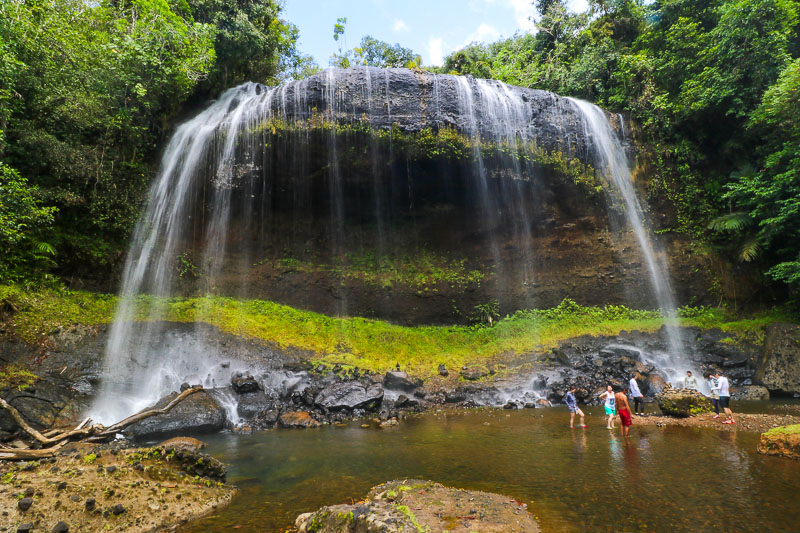 Beautiful Ngardmau Waterfall is probably the most famous on-land sight Palau has to offer. The waterfall is a tough 30-40 minutes hike and more than 500 steps from the entrance. You will pass some old railway track, which were used by the nearby bauxite mines (don't follow them too long, take the trail to the right). Then you reach the riverbed, which is dotted with natural pools. The waterfall is a short hike from here over boardwalks and a bridge. You will arrive at the bottom of the wide and tall waterfall (width 37m, height 30m), which apparently is the tallest in Micronesia. You can take a rough shower under falls or get behind the curtains of water.
> Babeldoab Island guide
> More waterfalls 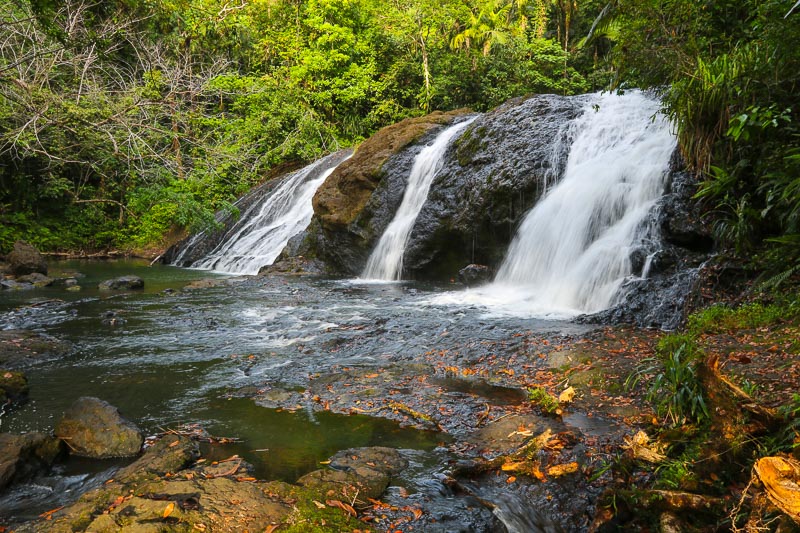 This waterfall is not just less known than Ngardmau Waterfall further north, it's location is close to a secret. Google maps are wrong and most locals have only heard about the waterfall. So to get there: Park outside the construction camp. Follow the 4x4 track along the fence, which quickly turns into a jungle trail which descent. You can start to hear the waterfall. You will arrive at the top of the waterfall. Follow the rope across the river (you will get wet feet) and take the trail down to the bottom of the falls. Vola. A beautiful waterfall in a tranquil jungle setting.
> Babeldoab Island guide
> More waterfalls 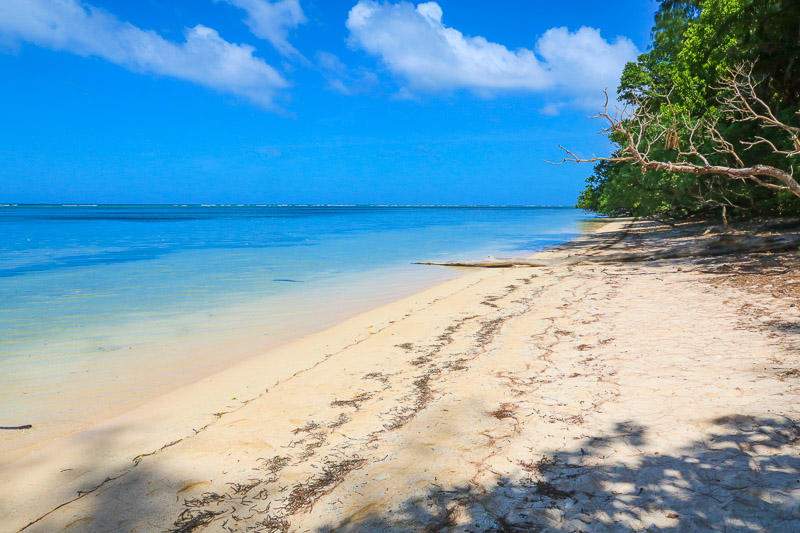 The landing sites for the U.S. invasion of Peleliu were both White Beach to the north and Orange Beach to the south. Today, there is a memorial at Orange Beach. Else the beach is a very tranquil with no buildings or any other development in sight.
> Peleliu Island guide
> More beaches, Australia and Pacific

Between Koror and Peleliu Island 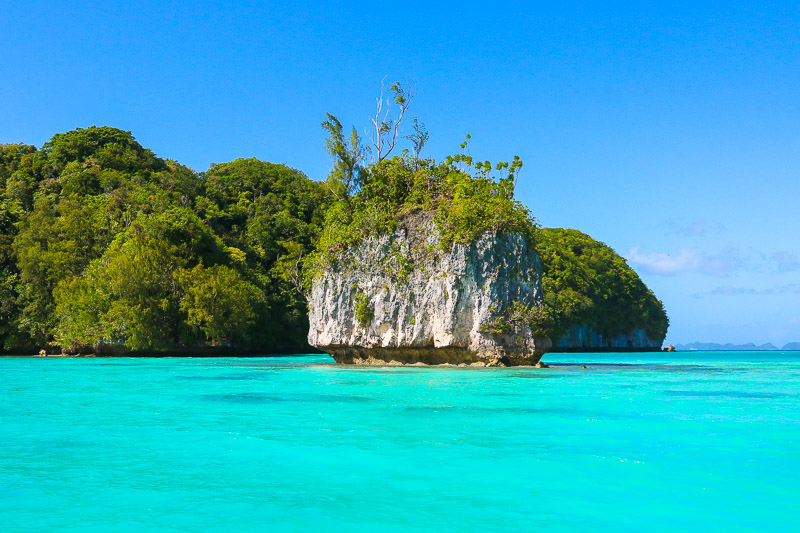 Iconic Rock Islands consist of more than 400 uninhabited forested limestone islands, which shoots up like green mushrooms from a lagoon so rich in shades of blue, that no superlatives will do it justice. The equal colourful coral reefs below are healthy and home for an abundance of fish, sharks, rays, sea turtles, and even some dugongs. A visit to Rock Islands is normally done as a day-trip, which combines Jellyfish Lake with some snorkeling/diving, but Rock Islands' pristine beaches, sheer cliffs, and rocky arches can also be explored by kayak. Jellyfish Lake is often mentioned as Palau's only World Heritage Site, but the whole Southern lagoon of Rock Islands, including Jellyfish Lake, is actually enlisted as one big site.
> Koror guide
> More UNESCO sites, Australia and Pacific
1 2 3 4 5 6