Nature places in Australia and Pacific 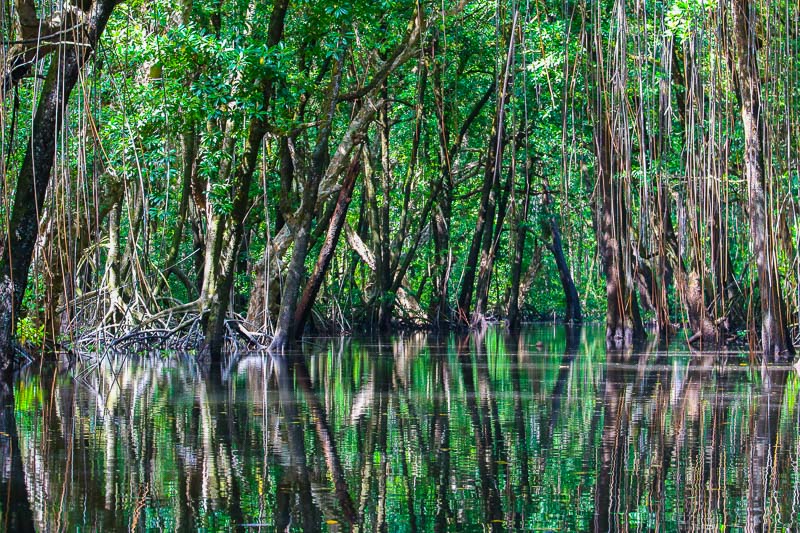 There is a misconception that Pacific islands are nothing but endless white beaches. True, some of the most picture-perfect beaches can be found in the Pacific, but most islands' coastline are rocks, cliffs, or mangrove. Pohnpei is the last. Almost the entire coastline is covered in a thick belt of healthy and pristine mangrove. The problem with mangrove is, it can be hard to explore. The boat trip to Rainbow Island goes through some of the largest mangrove area on Pohnpei, and it can be done at both high and low tide.
> Pohnpei guide 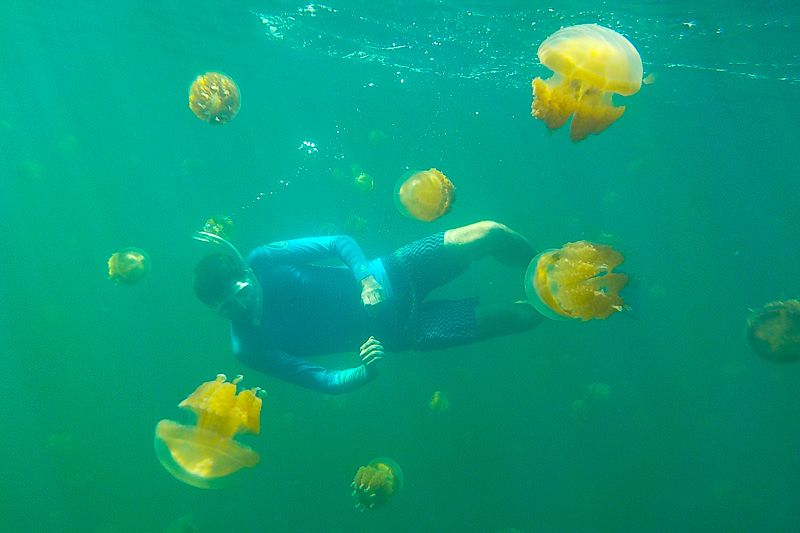 Jellyfish Lake is a true wonder of nature, and part of Palau's only World Heritage Site. As the name suggests, it's a lake filled with jellyfish. To add to the wonder, the lake is placed on a jungle covered tropical island in the most stunning azure blue sea. Since the jellyfish are harmless (only stings very very little), it's possible to swim with them in the lake. The Palau government want to protect the fragile Jellyfish Lake, so you need to join a tour (and get a permit) and there are restrictions, like no touching. However, the concentration of jellyfish can in some of areas of the lake be so dense, that the jellyfish gently bump into you. It's an expensive excursion (even more as it's usually combined with snorkeling or diving among Rock Islands), but totally worth it.
> Koror guide
> More UNESCO sites, Australia and Pacific 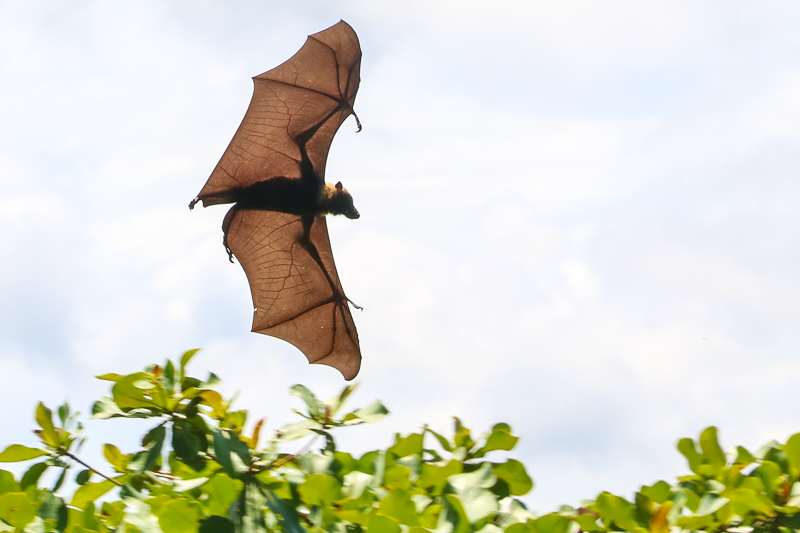 Namua Island is a small hilly island, which has the most beautiful beach at low tide. It's perfect for a daytrip from Lalomanu, though you can also stay overnight in the open fales. There is a steep trail which leads to the top of the island. From here you have a perfect view over a colony of bats, which sleeps in the top branches. It's quite a sight when the whole colony takes off or arrive back from a food raid.
> More bat exodus 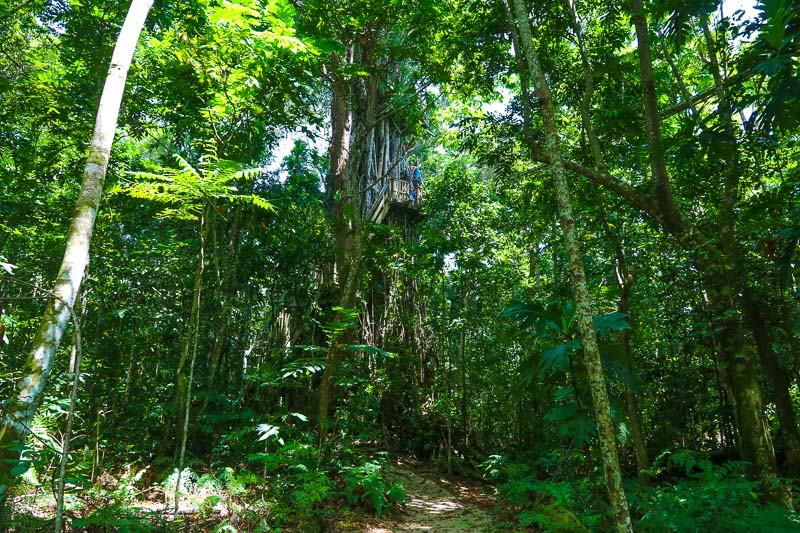 Part of the remote Falealupo Peninsula is a lush rainforest preserve, which protects some of Samoa's unique vegetation as well as fruit bats and a variety of birds. There is a wobbly walkway, which is strung 9m above the jungle floor and leads up into a gigant banyan tree (look hard for the small people in the picture). You can then climb to the top of the jungle canopy via a narrow stairway. The entrance ticket also covers two other sights on the peninsula; namely Moso's Footprint (a lava formation) and Rock House (two lava tubes).
> More national parks in Australia and Pacific 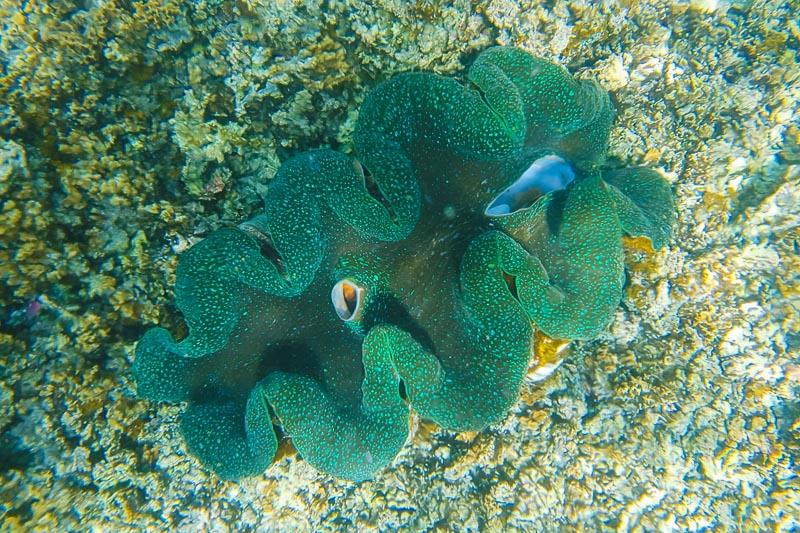 You can be lucky to see giant clams when snorkeling in Samoa, but the Giant Clams Sanctuary at Savaia Village has them for sure. You pay the fee and snorkel out into the lagoon. It can be hard to find the clams based on the locals description, but they are straight out from stairs and beyond (not within) the enclosed area, about 10 metres further out. There are some metal traps to look for at the bottom. 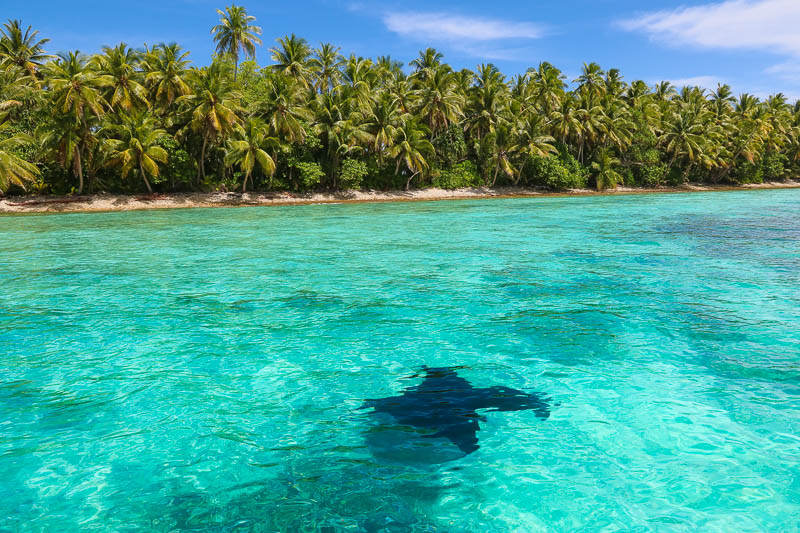 Most visitors are not impressed with Tuvalu, because all they see is Fongafale Islet. Here the sandy beaches are few and not that great, and the snorkeling is even worse. But a trip around the Funafuti Lagoon to some of the other islets will for sure change that impression. Uninhabited islets fringed with white sand and covered with native forest and palms trees lies like pearls on a string in the most perfect azure blue water. It's the iconic image of the South Pacific. The water can easily reach above 30 degrees and corals (though bleached) are home to lots of colourful fish. If you're lucky, you might see dolphins, manta rays (picture) and Green turtles. The lagoon also includes Funafuti Conservation area, which is a bird watcher's paradise. 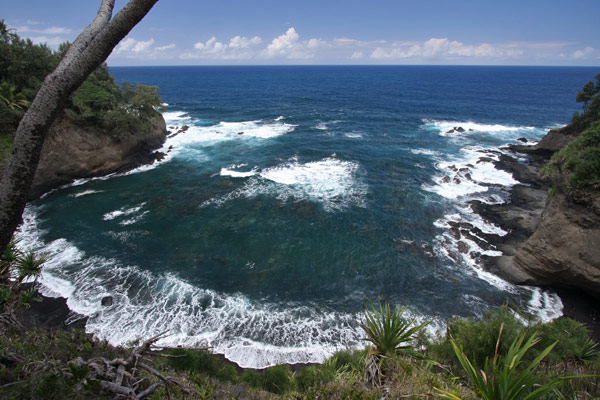 From the top of the sheer cliff that shelters the bay, you can look straight through the clear water and see mingling sharks (yellow reef sharks) at the bottom. Sea turtles do also occasional cruise by and can be seen in the surf. You cannot access the black sand beach at Sharks Bay, but you can go around the northern tip, climb down a ladder, and walk along the rather deserted beach on the other side. A beautiful and tranquil walk that can be extended all the way to Port Resolution (needs a bit of inland walking) where the gorgeous White Sand Beach lies.
> Photo gallery