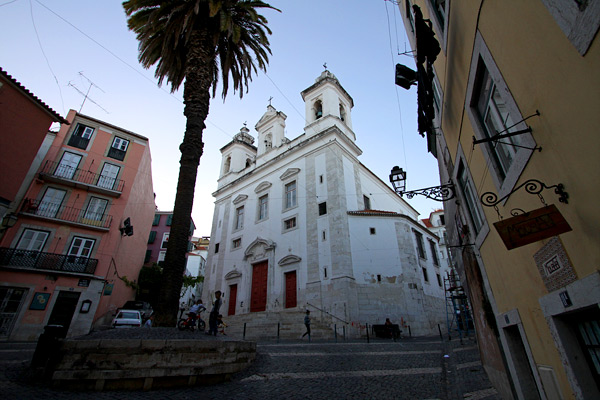 Alfama is probably the most adorable quarter in Lisbon and with good reason. Located on slopes below the Castle of São Jorge descending down to the harbour front, it has been a working-class neighbourhood for fishermen and the likes for ages - and still is. Famous for its dense maze of tatty old houses with balconies, small squares with football playing kids and chatting grannies in doorways. The labyrinth of steep staircases and narrow twisting lanes zigzags through every corner of Alfama and will leave you lost and confused within minutes of exploration. There are, of course, picturesque views over the quarter's red roofs and Tejo river at the top. 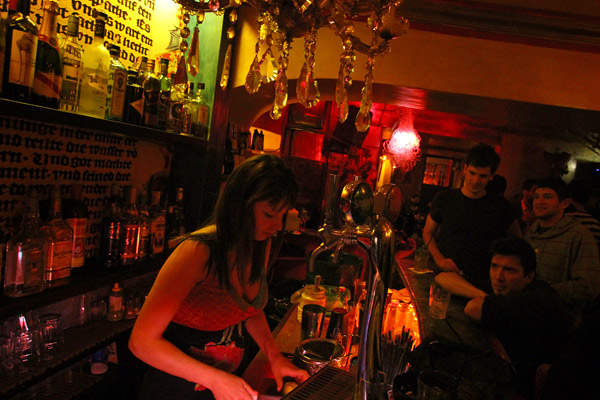 During daytime, the hilly neighbourhood of Bairro Alto can seem dull and semi deserted with bolted doors and graffiti-ridden facades, but when night falls it transforms into a buzzing nightlife quarter. Small intimate cocktail lounges stand side by side with beer bars, trendy music venues, traditional (and touristy) restaurants and alternative shops. Start the evening at Camões Square (Largo de Camões) with a couple of glasses of port wine served from the historical kiosk, before doing some serious bar-hopping through the cobbled lanes. 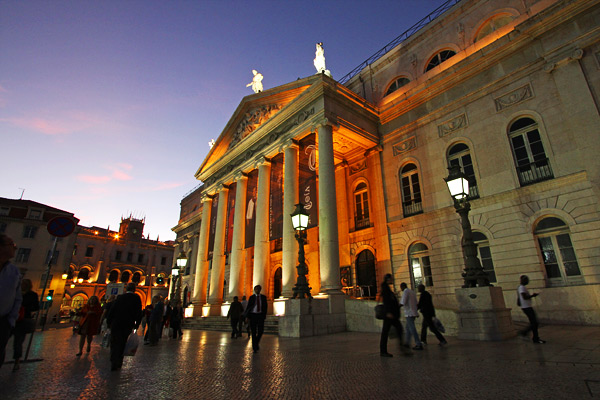 Baixa literally means 'downtown', since it's located at the bottom of the hills with Alfama to the east and Chiado and Bairro Alto to the west. Baixa is the heart of the historical centre of Lisbon and packed with elegant buildings and grand plazas. If it all seem to match too perfectly, it's because Baixa was demolished during the 1755 earthquake and was totally rebuilt. There are lots of outdoors cafes and charming pedestrian streets, which seem to attract an equal amount of locals and tourists - along with a handful of shady characters. The neighbourhood extends all the way down to the enormous plaza Praça do Comércio at the waterfront with splendid views over Tejo river. 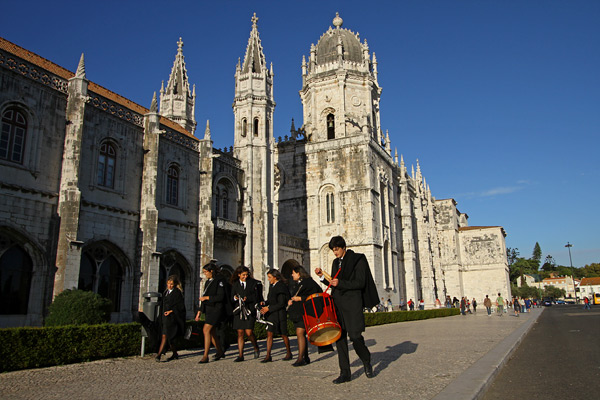 Belém, or more precisely Santa Maria de Belém, is a monument-packed neighbourhood that oozes history. It's here you find the grandiose Jerniómos Monastery, which holds the tomb of the ancient explorer Vasco de Gama, who discovered the seaway from Europe to India. Across the marina, stands another famous Lisbon landmark, the Tower of Belém. It was built to protect Lisbon from pirates and was located in the river a bit off shore, but the devastating earthquake in 1755 redirected the river, so the tower suddenly was standing on the shore. Both the Jerónimos Monastery and the Tower of Belém are UNESCO World Heritage Sites. Other points of interest in Belém are a handful of museums and parks, the nice promenade and the ridiculously popular pastry shop, Pastéis de Belém, where people queue up to buy... hold your breath, egg tarts!
> More UNESCO sites, Europe 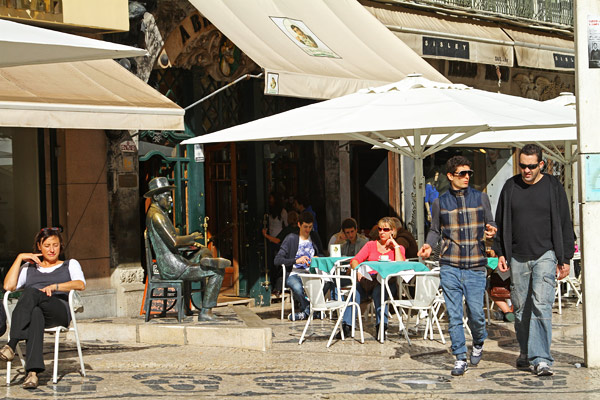 Chiado is the neighbourhood squeezed in between Baixa and Bairro Alto. The main streets are Garrett and Carmo, and the area is less hilly than the rest of Lisbon. The rather small main square carries the same name as the quarter, namely Largo Chiado, and lies right next to Largo de Camões on the border to Bairro Alto. The rest of Chiado is like the square, neat and beautiful, with cafes, museums and a mix of fashionable shops and traditional stores. 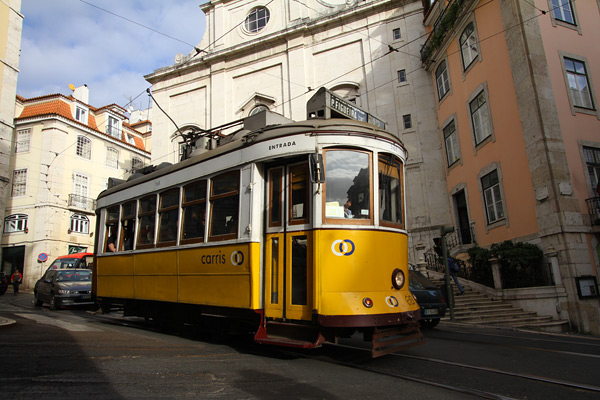 A cheap way to tour Lisbon is to jump on the vintage tram 28. It's a great way to see a good part of Lisbon's sights and get a feeling of the different neighbourhoods of Graça, Alfama, Baixa and Bairro Alto, Chiado and Estrela. The noisy and squeezed ride starts (or ends) at Praça Martim Moniz from where it winds its way through narrow streets where balconies and house corners are just barely passed. It cruises by several main sights like the castle of Saint George (São Jorge) and the viewpoint at Portas do Sol before it descends downtown at sea level and continues again to the hills at Bairro Alto and beyond. Keep in mind that this ride is hyped in every guidebook for Lisbon and a good portion of the passengers are fellow tourists - and pickpockets, according to warnings. 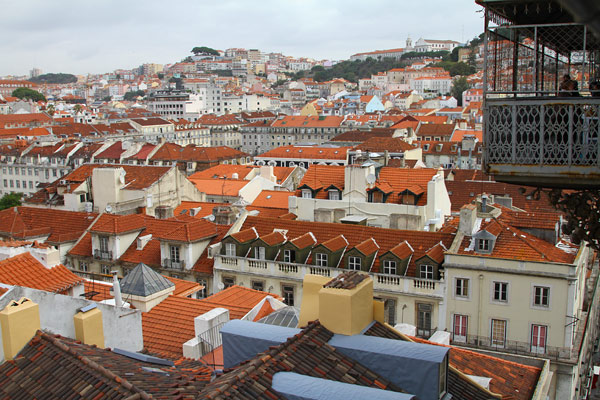 Since Lisbon is spread over seven hills, the city has plenty of great viewpoints with amazing views. Some of the most famous are:

Miradouro de Santa Luzia
Picture perfect views over the rooftops of Alfama, the harbour, and the Tagus River.

Santa Justa Lift (picture)
This historical lift connects the lower streets of Baixa with Carmo Square. It has become a tourist attraction itself, but you don't need to wait/pay for a ride to enjoy the view from the top, just use the passageway from Carmo Square.

Miradouro da Graça
Next to Graça Church is this splendid viewpoint with sweeping vistas of central Lisbon including St. George's Castle. There is an open-air cafe and it's a popular hangout at dusk.

Miradouro Senhora do Monte
This is the highest point in Lisbon and offers the best panoramic views of Lisbon. It's a bit out of the way, but has a peaceful atmosphere favoured by dating couples.

Miradouro São Pedro de Alcântara
Another pretty viewpoint with great views of the St. George's Castle and historical Lisbon. To get here, take a ride from Baixa in Elevador da Glória, one of Lisbon's three funiculars.