A motorcycle drive from Kampot 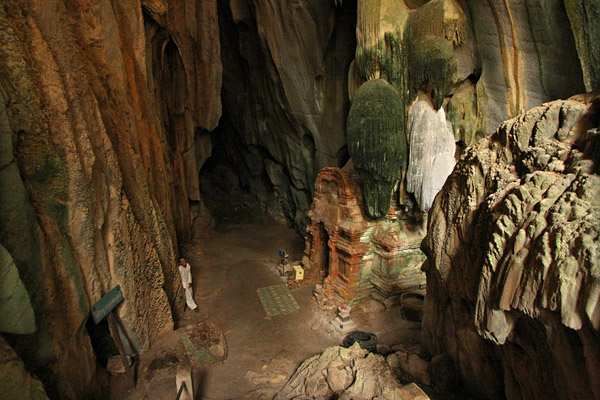 Phnom Chhnork is a limestone mountain which rises above the flat plateau outside charming Kampot town. A 203 steps stairway leads up to a cave with a pre-Angkor (7th-century) temple inside. It is built in bricks and dedicated to Shiva, with a stalagmite inside acting as a phallic altar. Phnom Sidaoun, which lies on the same dirt road but a bit before Phnom Chhnork, is a small cave complex next to a working stone quarry. There is a recent image of Buddha and some cave passages. Local kids are happy to act as your local guides. Outside, numbing stone beating is going on, which is all done by hand by skinny elders - it is depressing to watch but is unfortunately part of life in poor Cambodia.

Around 50 km northeast of Siem Reap 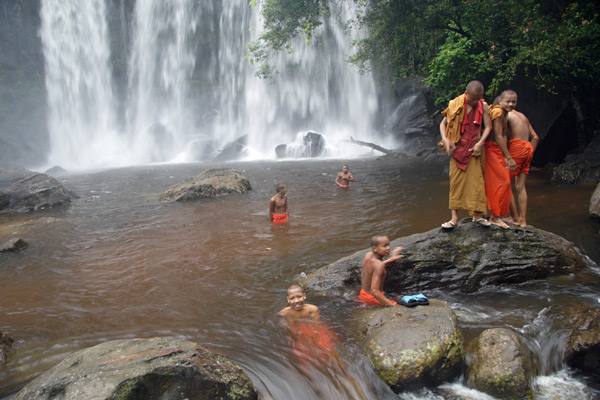 Phnom Kulen (487 m) is a refreshing side trip from touristy Siem Reap. A sacred mountain with a wat housing a huge reclining Buddha carved out of the top of a huge boulder. The place also doubles as a recreational area for Khmer families, who come here to relax and enjoy themselves. Under the nearby waterfall, you can splash around with the locals and wash some of the dust off from the rough ride coming here. Combine the trip with a visit to Kbal Spean (the River of Thousands Lingas) and Banteay Srei, a hindu temple with some of the best Angkor carvings.

Between Kampot and Kep 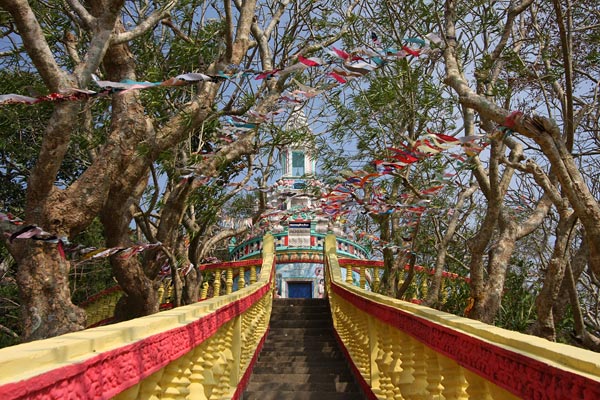 Phnom Sorsia is a small mountian rising from the flat farmland outside Kampot. There is a monastery at the foot and a small colorful temple on the top along with stupas. The mountain also has some cool caves passages where you can see bats. The great thing about this place compared to Phnom Sidaoun, Phnom Chhnork and Wat Kiri Sela, is that it is a working monastery, so there will be young novice monks hanging around. As with the other places, you will very likely be greeted by some young kid who will tag along as your guide - whether you like or not. But they do know the caves, so it might not be such a bad idea.
> Photo gallery 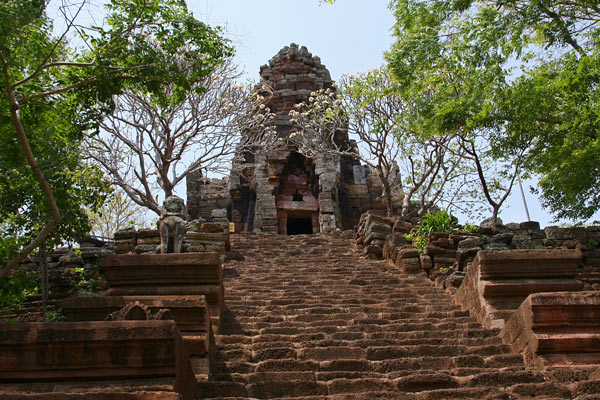 Prasat Banan is an Angkor temple ruin on top of the small mountain Phnom Banan (102 m) which rises abruptly above the otherwise flat countryside outside Battambang. It was built in the 11th century and consists of five classic Angkor towers. It is a tiny temple compared to Angkor Wat standards, but the location and serenity makes up for the small size - chances are you are going to have the whole place to yourself (beside the drink sellers). Danger signs remind you that the ruins are crumbling and judging by the leaning angle of some of the towers, they look like they could collapse at anytime. There are also some caves which can be explored - alone or with the help of one of the local kiddie guides.
> More Angkor temples

River of a Thousand Lingas

About 50 km from Siem Reap 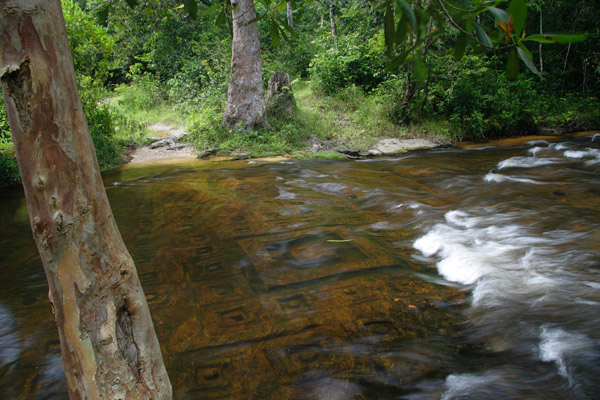 At the foot of Phnom Kulen lies a very different Angkorian site, namely Kbal Spean or in English "River of a Thousand Lingas". A linga is a phallic symbol of Hindu god Shiva. So the Angkor kings had the river bed of Kbal Spean river carved with "a thousand lingas" to make the water fertile for the rice fields - like a religious water filter. The lingas date back to the 11th and 12th centuries, but were only discovered in 1969, and then unreachable for another twenty years due to the fighting with Khmer Rouge. See the lingas on your way to Phnom Kulen.
> More Angkor temples 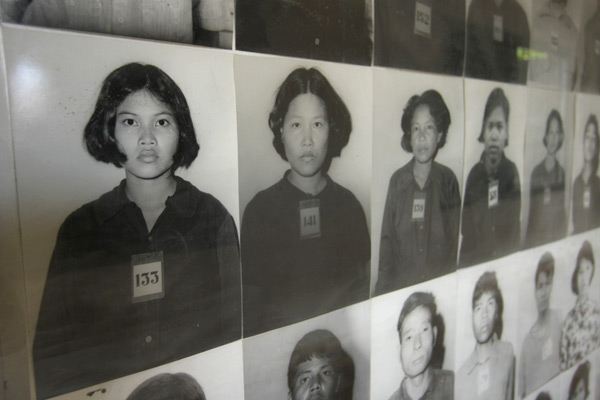 When the Khmer Rouge came to power in Cambodia in 1975, they turned the country into a Maoist state. Everyone of higher education was considered an enemy of the state and therefore had to be executed. For that purpose, a high school in central Phnom Penh was turned into a torture center, named S-21. Throughout the four years of Khmer Rouge control, more than 16.000 Cambodians were tortured here and eventually killed, either here or at the killing fields at Choeung Ek a bit out of town. The Khmer Rouge kept meticulous records, including photos, of all the prisoners and their horrific torture. These can today be seen at the high school which is turned into a museum. A grim memorial of how bad men can treat each other.
> Phnom Penh guide 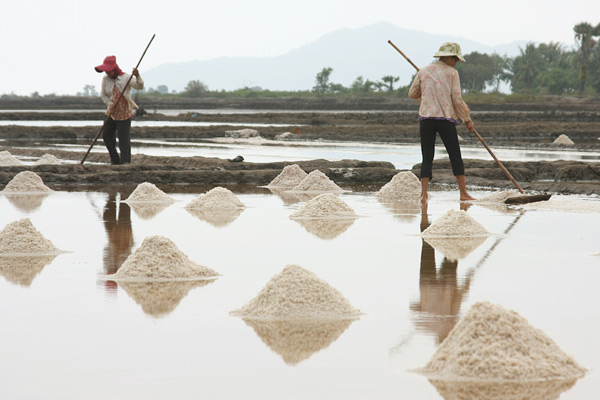 The area around Kampot is dotted with salt fields. Here, ocean salt is harvested from flat fields irrigated with seawater. During dry season the salt crystallizes within days which then can get scraped together into piles for collection. It is a fascinating landscape when the sky's reflection in the flat squares is broken by hundreds of white cones. Salt production is hard work for the sun is fierce and there is no shade, so workers cover themselves from head to toe. So after a visit you might start to appreciate the salt for your eggs a bit more.

Sihanoukville is Cambodian's answer to a beach resort area. There are several nice beaches around what might one day turn into one connecting town when all the developments are completed. The main beach drag is the crowded Serendipity Beach, which slides into the deserted Ochheuteal Beach. It is a shabby version of Phuket with ramshackle deck chairs, aged jetskis for rent and an endless stream of beach kids, massage ladies, beggers and cheap draft beer. Some people like the edge and seediness of the place (all the middle aged men certainly seem to like it), while others might wish they were in picture-perfect Thailand. Serendipity Beach has a lively backpacker scene where expats, sex tourists and young travellers meet over more cold beers. If you want to escape all the buzz and beach hawkers, hit for easy going Otres Beach further south or one of the many tropical islands off the coast, like Koh Russei (Bamboo Island) or Koh Rong (Monkey Island).
> Photo gallery
> More beaches, Asia

The ethnic minorities of northeast Cambodia, like the Tompuon people at Kachon village, bury their dead in some rather elaborate graves in the forest. The concrete tombs can have fences, wooden elephant tusks, thatched roof and the entrance is guarded by carved statues of the deceased (man and wife are buried at the same place) - some with very explicit genitals. The cranium of the buffalo that got sacrificed during the burial ceremony hangs at the front and the family of the deceased often places things that the dead can use in afterlife like bottles, pots, local whiskey, yes even sunglasses. Be sensitive when visiting a tribal cemetery, so you don't offend the locals nor the spirits.
Similar cemeteries can also be seen near Kon Tum in Vietnam.
> More burial customs

Another tuk-tuk ride out of Battambang 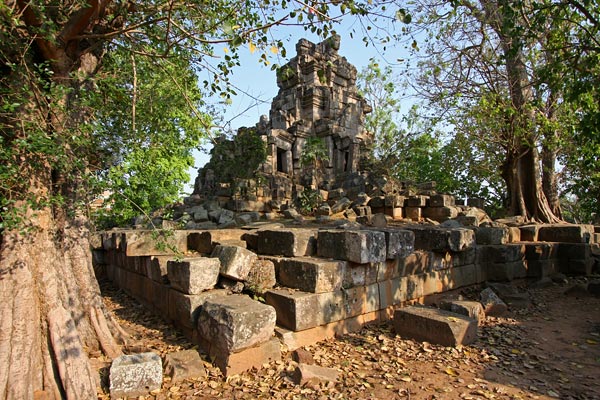 Another Angkor temple ruin outside Battambang (the other is Prasat Banan). Though the name contains the word Phnom, which means mountain in Khmer, the temple is located on flat ground. It was constructed during the 11th century and is today partly collapsed - but that just adds to the authenticity. Tall trees are keeping the ground in the shade, while a newer pagoda with a giant never-will-be-finished Buddha statue at the front makes it difficult to see the old temple from the dirt road. A trip out here goes through charming villages and flat farmland, which should be reason enough for visiting Wat Ek Phnom.
> More Angkor temples
1 2 3 4