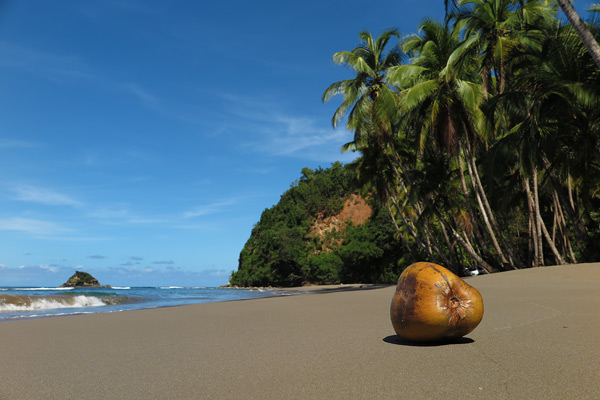 Hands down the prettiest beach on Dominica. A crescent shaped bay protected by steep cliffs and mountains covered in rainforest. The long beach has fine sand and is, of course, lined with palms – just the way a paradise beach should be. Apparently, Batibou Beach featured in the 'Pirates of the Caribbean' trilogy starring Johnny Depp. A thatched hut beach bar is – at the moment - the only development in the bay. The only access to Batibou Beach is down a bumpy dirt road only suitable for 4x4.
> More beaches, Americas 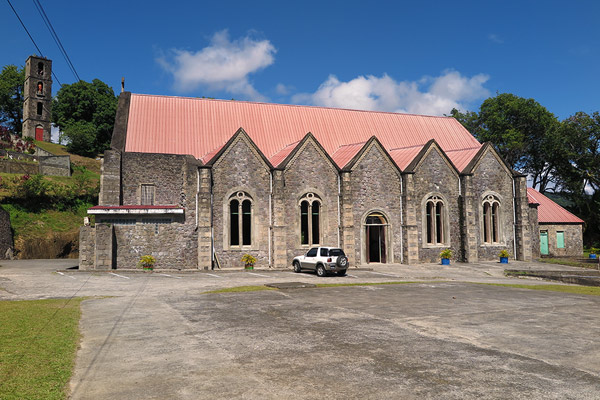 The largest cathedral in Dominica is located in the village of Berekua. The beautiful stone structure faces the Atlantic Ocean - and that's pretty much what we know about it.
> More great churches 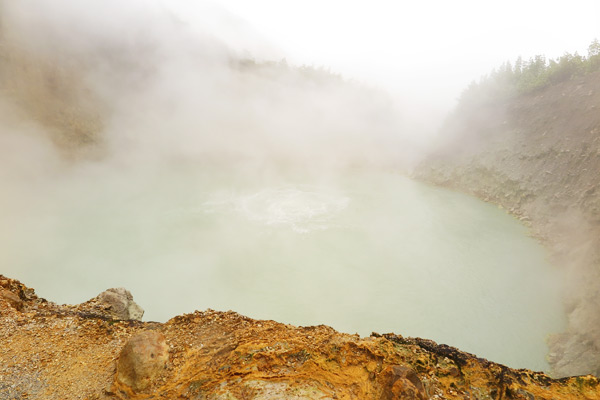 This is Dominica's most famous oddity – a boiling lake. The murky lake sits in a cauldron and when active is bubbling due to emitting gases from the molten lava deep underground. The lake can only be reached by a trek that takes about 6 hours return. It's not an easy trek, but very rewarding with lush rainforest, amazing views over the natonal park, steamy mini geysors, and, of course, the second largest boiling lake in the world (the largest is in New Zealand). The trek goes through a lot of elevation and though there are steps of wooden beams, it can get very muddy and slippery. Some parts need to be scrambled (with hands and feet), creeks need to be crossed several times, and the last section up to the crater rim can be hard to find unless you have a guide or have downloaded a gpx file to your gps device. The trek should not be started after 11 am and begins at Titou Gorge.
> More lakes
> More UNESCO sites, North America 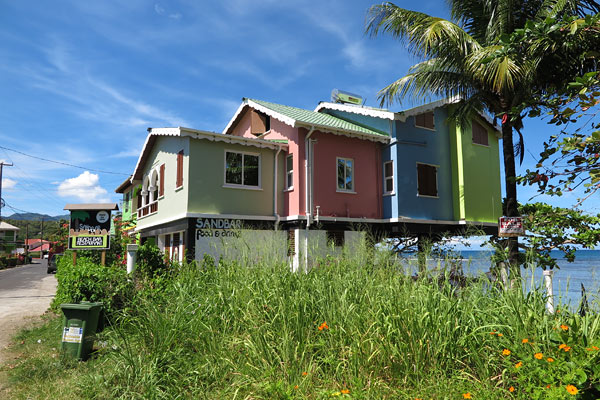 The fishing villages of Calibishie is beautiful located on the north coast. Here houses are built all the way down to the water front, leaving not much of a beach. Even the local church get splashed by the waves at high tide. But Calibishie also doubles as Dominica's only holiday spots with a growing selection of hotels and beachfront restaurants. This is as close as you get to a holiday vibe in Dominica. 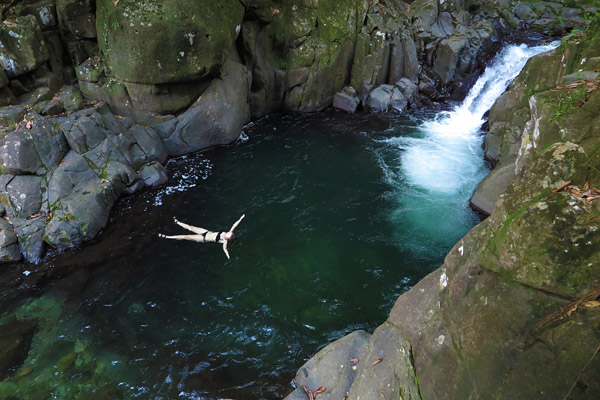 Chaudiere Pool is a deep swimable hole below a small waterfall hidden in the jungle. Locals will assure you that's OK to dive in form the surrounding cliffs. Chaudiere is sometimes referred to as the "Emerald Pool of the north", though the two pools are very different. At Chaudiere it's all natural, no entrance ticket, no boardwalks, no rails, just the river, cliffs and the rainforest. With a 4x4 you can drive as close as 10-minute-hike from the pool. Ask for direction when getting to the village of Bense.
> More waterfalls

Dominica is blessed with several amazing waterfalls. The waterfall at Emerald Pool is among the most beautiful ones. The water cascade gentle over the top of a grotto into a cool crisp natural pool, which is perfect for a refreshing dip on a hot day. To get to it, you need to follow a trail for about 10 minutes through the lush rainforest in Morne Trois Pitons National Park, an UNESCO World Heritage site itself. If you're unlucky with the timing, you might have to share the pool with a busload of cruise tourists.
> More UNESCO sites, North America
> More waterfalls 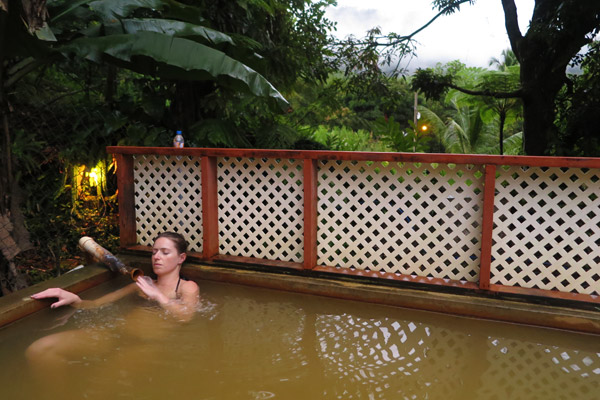 Wotten Waven is a small village, which has become the spa town of Dominica. It's lovely settled in the mountains above Roseau not far from the star attractions of Trafalgar Falls, Titou Gorge, and the trail start for Boiling Lake. There are at least a handful of spas in Wotten Waven, some are open air while others have private cabins. Check the temperature of the pools before choosing which spa to use. 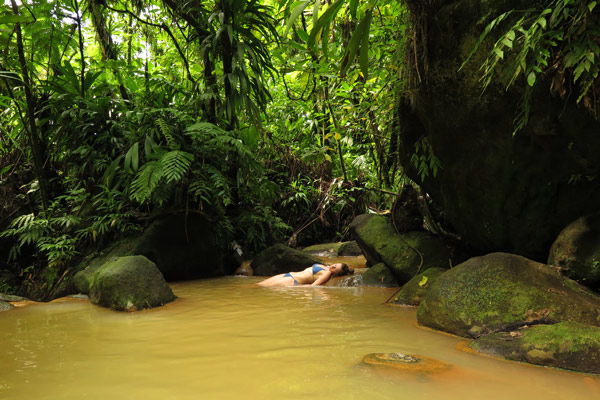 Below the viewing platform for Trafagar Falls runs a creek of steaming hot spring water. There are several natural pools, where you can dip in and enjoy a hot spa in the most perfect jungle setting you can imagine.
These hot springs are also mentioned under the Trafalgar Falls, but since they are so darn perfect, they get their own entry.
> More natural hot springs 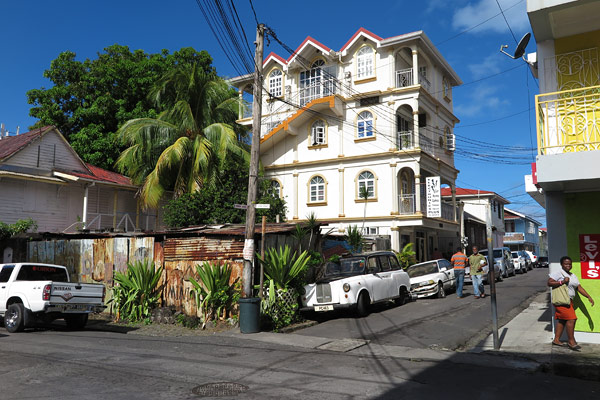 It's a strange sight to see cruise tourists with white pants and summer dresses stroll the streets of low-key and timeworn Roseau. But the locals seem endearingly indifferent to the dribble of tourists. Here people mind their own business without being unfriendly. The mostly colourful buildings come in every style from posh with built-in double garage to wooden shacks. There are lots of churches, but none impressive, though the front of the old cathedral stills stand. During daytime, Roseau is crowded with cars and people, but at night and Sunday, Roseau is all but empty. Don't mind the few dodgy characters in the streets, the city is safe as anything can be. 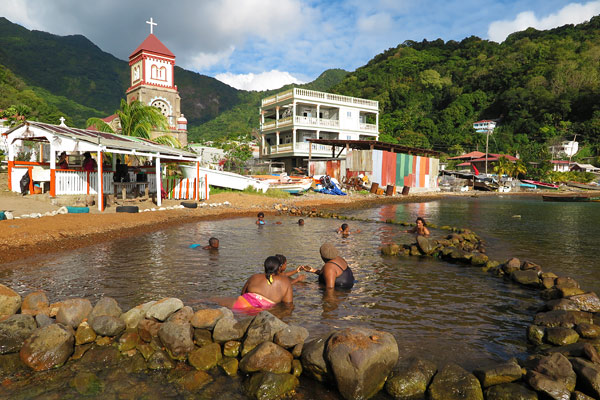 The fishing village of Soufrière has a wonderful colourful church standing next to the beach. There the water is slightly warmer than elsewhere, as volcanic steam bubbles through the sand and creates a natural spa. A pool have been made and there is small snack shack for the mostly local visitors.
> More natural hot springs
1 2