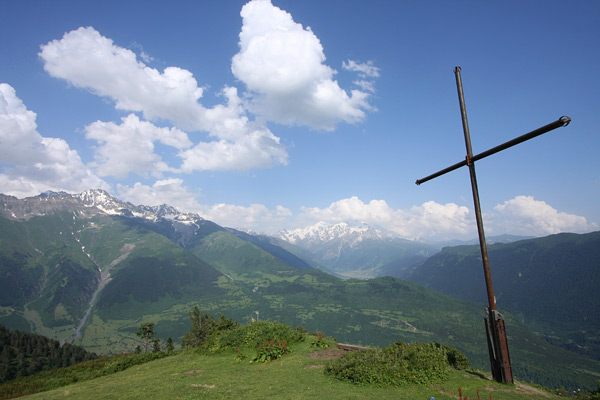 High above Mestia village, crowns a cross that is just barely visible to the naked eye. It is a hard 2.5-3-hour trek up there and the same back, but the views (on a clear day ) are just spectacular. From the cross (2193 m), the most prominent peaks you have in view are the twin peaks of Mt Ushba (4700 m), Bachgurani (3837 m), Tetnuldi (4858 m) and, across the valley, Mekhnazhi (3559 m) and Lahili (4008 m). There are several trails up to the cross, but the jeep trail that winds around the backside is probably the most rewarding since the view just gets better and better as you walk up. There is apparently an alpine lake 2-3 hours (one way) further trekking towards Mt Ushba, but you need to start early to be able to make it back before dark.
> More trekking
1 2