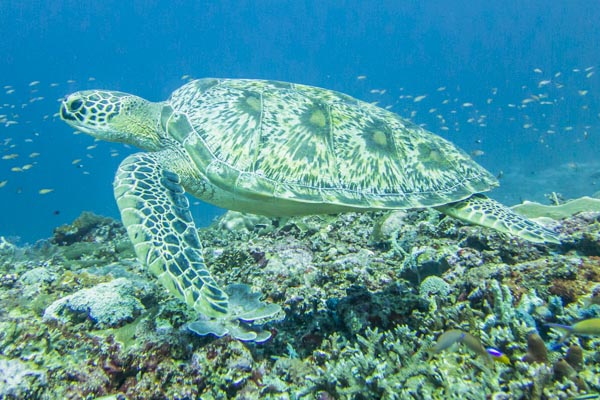 The diving around Indonesia’s Gili Islands is nothing short of spectacular, with enough variety to keep even the fussiest divers busy for more than just a few days. Accessible also from north-western Lombok, dive sites abound around the three Gili islands. It is a great place to see Green Sea and Loggerhead Turtles, some of which grow to one and a half metres in diameter. Reef sharks are common along the reefs, which abound with tropical fish species of all kinds, ranging from moray eels and Napoleon fish to lionfish and clownfish. The corals are diverse and splendid in colour, and for those looking for something extra, there are several excellent wreck dives. If that’s not enough, the Gili after-dive scene might just win you over.
> More sea turtles 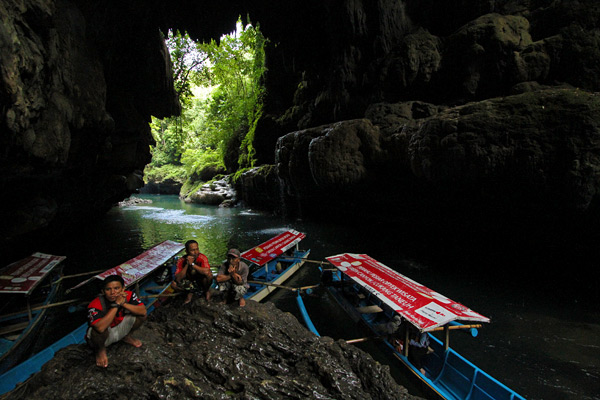 Seeing the Green Canyon (Cukang Taneuh) means a boat trip up a jungle-fringed river to a large, but short, cave tunnel. From here it's optional (for an additional fee) to swim further into the canyon. Trips to the Green Canyon is best done on a tour, else you have to book the whole boat yourself. Tours from Pangandaran includes also Green Valley and a trip through the gorgeous countryside.

A scooter trip from Pangandaran, Java 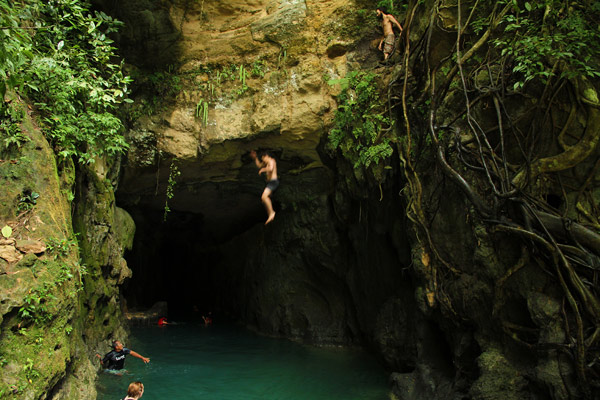 Green Valley is actually more about a river than a valley. You can swim in the river, exploring a small cave (also by swimming), jumping from cliffs, swing in robes and do body rafting from pool to pool (the fun level depends very much on the water level). Tours to Green Valley from Pangandaran are offered in combination with the Green Canyon along with excursions to the pretty countryside. If you want to do it yourself, look out for signs saying Citumang. 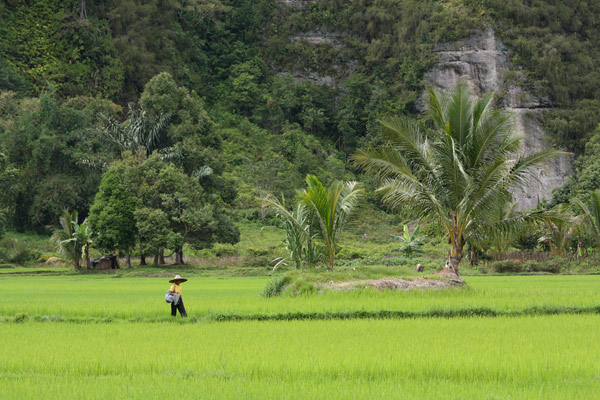 If you have the idea that Indonesian country life is idyllic, Harau Valley is just the right place to get your beliefs confirmed. Small villages stand in a sea of vibrant green rice fields enclosed by towering, 100-metre steep cliffs semi-covered in jungle. There is even a waterfall (though not big), just to top it off. You can still see traditional Minangkabau houses with their distinctive roofs, shaped like buffalo horns. It's all just so stunning and there are several home-stays, so you can even extend your visit here. The best way to visit Harau Valley is with your own set of wheels, so rent a scooter in Bukittinggi. 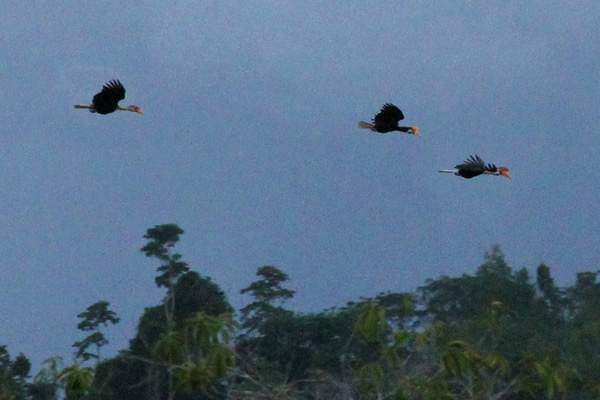 Every evening hordes of hornbills past by the small village of Tumbulawa on the Togean Islands. During the day the hornbills have feasted in jungle, but for sleeping they prefer the mangrove next to village. Right when the sun sets (at about 6 pm) they emerge from the jungle in the horizon and glide graceious home over the tree tops. Expect more than a hundred hornbills of the smaller Sulawesi spiece, where males have white heads. There is a watch tower, which gives you (if you dare to climb the rusty ladder) panoramic view over the canopy of the jungle and unobstructed view of the hornbills in flight.

Not just a natural spa, but a whole river with steaming hot water flowing through the jungle in the shade of volcano Inerie. The water is hot, as in around 47 degrees, and not suitable to swim in, but downstream, several cold side-rivers flow in and make the temperature more tub-warm. To find the spot, travel on the road from Bena to Naga outside Bajawa. Cross the bridge over the steaming river and follow the trail behind the houses to the right. It is a totally tranquil settings with bamboos and trees hanging over the green bottom river. Locals come down to bathe and do not seem to mind the numbing heat in the unmixed hot water upstream.

At the summit of volcano Kelimutu (1640 m) are three different coloured crater lakes. The colours are slowly changing and are caused by the dissolving of minerals. One of the lakes is apparently always turquoise, while the two others can be anything from black, emerald green to chocolate brown or even red - together or separately. Seeing the sunrise from the summit is often hyped as a "must see"-thing and while the first rays of light certainly will bring some warmth to the freezing cold, the lakes can be equally enjoyed later in the day when the rays of sun actually reach the surface of the lakes.
> More lakes

The world's biggest lizard is the Komodo Dragon that can grow to over three meters long. It is aggressive, fast, and its bite can be deadly due to the impressive range of bacterias in its mouth. The Komodo dragon lives not only on Komodo Island, but also on Rinca Island which is closer to Flores. On Rinca you actually have a better chance to see the dragons, since the island is smaller and there is less food available - meaning they hang out around the ranger station. To catch sight of a fully grown monster in its natural environment, go to Komodo, but you might risk not seeing any at all. The best option is, of course, to visit both islands.
> Photo gallery
> More UNESCO sites, Asia 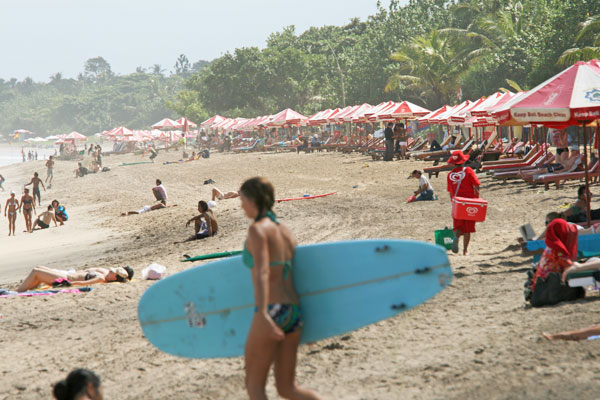 Why would anyone go to Kuta? It's touristy, the town is ugly and the beach is not even that nice! Well, because Indonesia's most famous beach area is pleasure zone. There is something for everybody, whether they seek style or sleaze. Potbellied, beer drinking Australians are rubbing shoulders with tattooed surfer dudes and blonde, Scandinavian girls on holiday fun. Even families on vacation are crowding up the narrow lanes that are packed with endless supplies of t-shirts, pirate DVDs and tacky souvenirs (like wooden penis bottle opener, why?). But it is Kuta, and that is how Kuta is!
> Photo gallery
> More backpacker ghettos
> More beaches, Asia
1 2 3 4 5 6