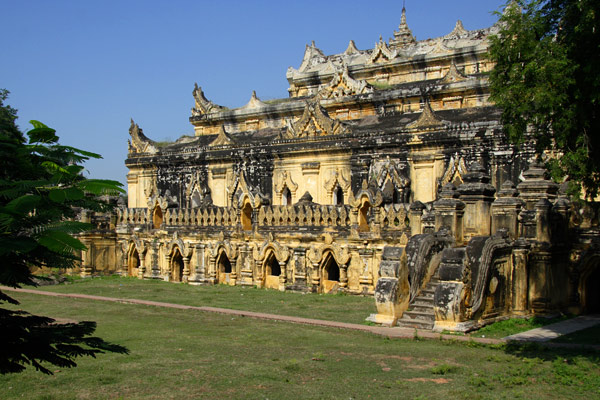 Ava (or Inwa) was the capital of Burma from 1364-1841 during various kingdoms. The previous capital was Sagaing across the Ayeyarwady River, but it got overran by the Shan (a neighboring kingdom). So the capital got moved to the other side and strategic protected by handmade canals, given Ava a quiet island feeling today. Among the bigger sights are Maha Aungmye Bonzan monastery, a stone monastery build in 1818 by a queen, and Bagaya Kyaung monastery, a teak monastery build in 1834. The whole Ava ruins area is spread out and the only way to get around is by horse cart, which is actually less comfortable than it sounds. 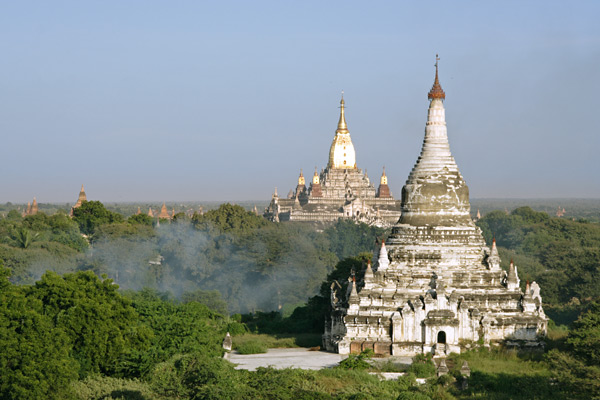 This temple site is one of the most magnificent on the globe. Build over a period of 230 years about 900 years ago the Bagan's kings managed to build as many as 4400 temples on the flat plain where the Irrawaddy River makes a bend. Today the temples show centuries of neglect and decline, which just add to the mystery of the place. All temples are different and many are open, so it's possible to explore the inside passageways with old Buddhist murals and huge Buddha statues. Do the sight seeing by horse cart and climb one of the less famous but tallish temples at dusk for the mandatory sunset viewing. It's one of those settings that give sunset viewing its reputation.
> Photo gallery
> More amazing temples

On the edge of the Indian Ocean 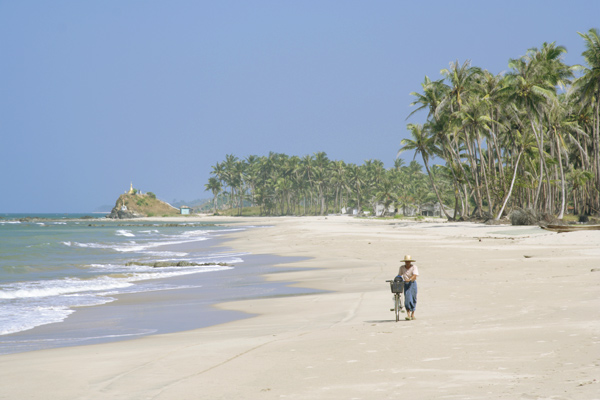 This white beach that stretch out into the Bay of Bengal might not has the high status as Ngwe Saung, also called Silver Beach, to the south or Ngapali further north. This is a holiday spot for the middle class, which turn the beach into a playground at sunset. But if you stroll a kilometre north, pass coconut palms and sandy outcrop, the beach will be pretty deserted. Only swaying palms, turquoise water, and a golden stupa will disturb you there.
> More beaches, Asia

The Golden Rock was unfortunately behind scaffold being cleaned when this picture was taken.
> More amazing temples 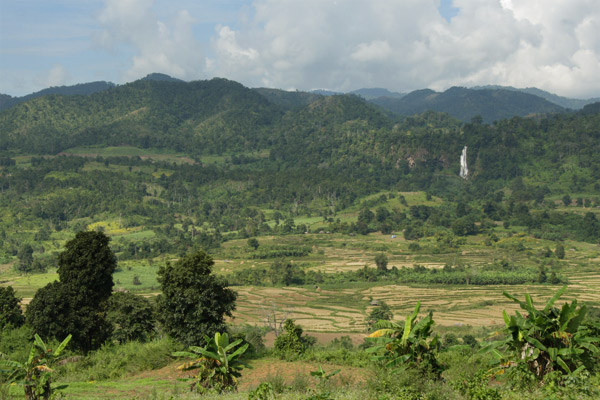 Hsipaw is a very lovely little town with a beautiful setting among green fields and a backdrop lush hills. Not much is happening here. The market is well stock and bustling in the mornings when villages people come in, and there are some pretty walks through rice fields to nearby villages and hills - and that is pretty much it. Well, that's not entirely true for Hsipaw has its own Shan palace, which housed the last Prince and Princess of Hsipaw who was deposed in 1962 during the military takeover. Maybe Hsipaw charm lies in the fact that you can rest and reflect, instead of feeling obligated to see another pagoda.
> Photo gallery 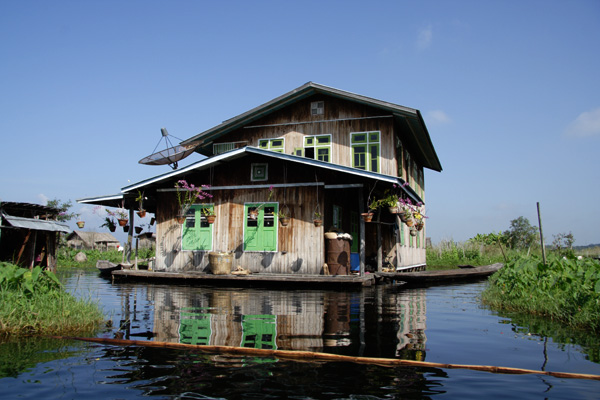 Inle Lake is a very pretty place and one of Myanmar's major attractions. The mountain lake (880 m) lies in the Shan State and is home to several unique things like the leg rowing fishermen, stilt villages with floating gardens, and the cat jumping monastery of Ngaphechaung. If you want to take in everything the lake has to offer, it will be a long day including a bit of sightseeing along the shores, where the golden stupas stand and the non-floating markets are. A must see if you choose to go to Myanmar.
> Photo gallery
> More floating villages 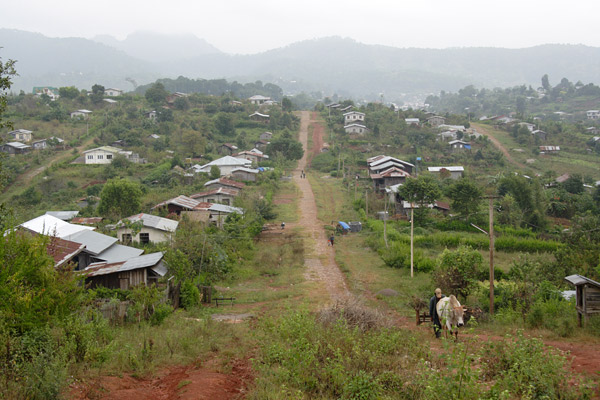 Kalaw is a small hill town nested among rolling mountains. It sprawls over several hills and is centered around the market. But travellers are not coming to Kalaw for shopping, but to go trekking in the green mountains and, particular, visit minority villages of the Palaung or Pa-O tribes. Trekking options range from easy half day treks over harder ones to multiple days, even all the way to Inle Lake. Though these villages only are accessible by foot some have been modernised, but you still find traditional longhouses, where several families live, and village monasteries. Expect trekking along muddy trails with beautiful views over sloping tea plantation. For the best experience, find a knowledge guide in Kalaw who knows the villages and people there. 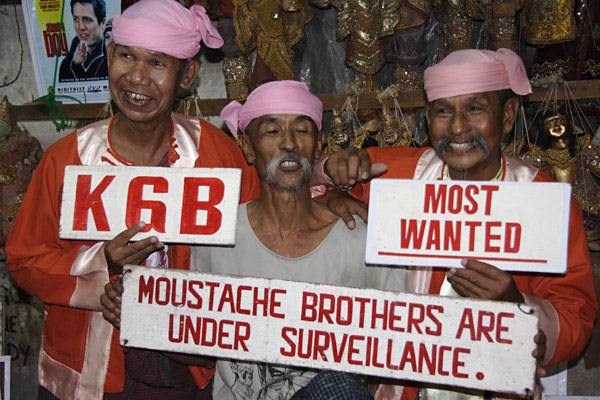 Just the bare existence of the theatre troupe The Moustache Brothers is a sensation. The tree brothers U Par Par Lay, U Lu Zaw, and Lu Maw make funny banana, slapstick comedy mixed with classic Burmese dance with a strong flavour of sarcastic government criticism. Several times they have been arrested and put in jail for many years, but somehow they manage every time to get back to their little show in their private home. These days the daily show is only for foreigners and an institution in Mandalay. Don't forget to buy the T-shirt, the money is well spent.

About 70 km from Mandalay 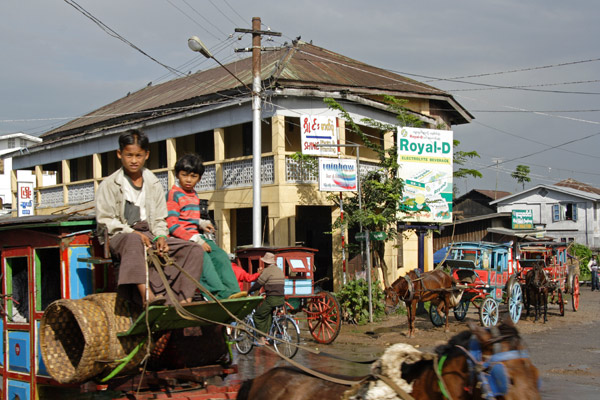 Myanmar is full of long lost places and the little mountain town of Pyin U Lwin is just such example. Located at about 1000m in the cool hills it makes a great getaway from the hot Mandalay in summertime. Sweater shops are the hot thing here and occupy some of the grand old colonial houses that stand along the main street. Tea houses are hidden in the side alleys along with the mosque, church, Buddhist monastery, and even a Chinese temple. Beside bike cycles, the primary transportation is horse wagons and the railway pass by here, making it a grateful stop on the way northeast.
> Photo gallery 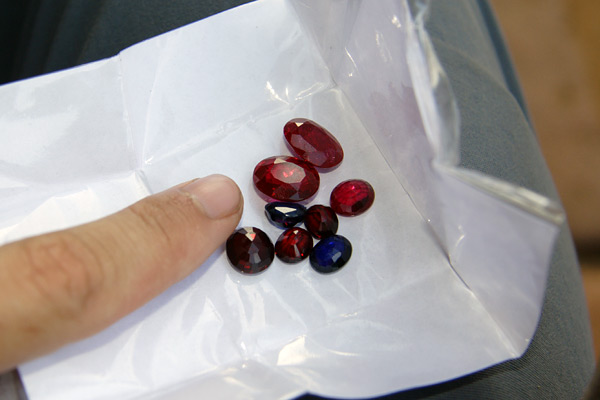 Myanmar is one the biggest sources for rubies and sapphires in the world. It is estimated that 90% of the world's rubies come from Myanmar, which is a bit strange since many countries have trading embargo against Myanmar. But the stones just find their way through Thailand, e.g. to Chanthaburi gemstone market. The most precious of them all is the dark red, so-called Pigeon's blood, ruby. Inside Myanmar it is not unusual to get offered gemstones by strangers in the streets. We got offered the gemstones on the picture from an old man on a bicycle. Do we need to tell that we didn't buy any, even though he promised the stones were real and of good quality - "oh, really?".
> More things NOT to do
1 2