© Vibe Sannig
Ama Dablam is one of the most beautiful mountains of Sagarmatha National Park in the Himalayas. When you look at the Everest mountain range for the first time, Ama Dablam (and not Mount Everest) definitely is the most conspicuous and impressive sight. The steep snowy peak was climbed for the first time in 1961 and is among the most popular and most technically difficult mountains to climb. The characteristic double peak, (the highest peak is 6812 m and the lower peak, 5563 m), makes the mountain a great bearing compass when you trek to the Everest Base Camp or around the region.
> More mountains

© Vibe Sannig
If you travel to Kathmandu, a visit to one of Nepal's ancient kingdoms, Bhaktapur, located 30-45 minutes from the capital, is worth a visit. Bhaktapur is on the World Heritage list, and no cars or buses are allowed inside the gated neighbourhood. There are beautiful ancient monuments, temples and snake pools, and if you move away from the touristy Durbar Square and stroll down the small winding streets, you will experience a completely different and amazing world. Here, you will find local people performing their daily chores, goats on porches, lots of small traders, beautifully decorated doors and fantastic colourful food markets.
> More UNESCO sites, Asia 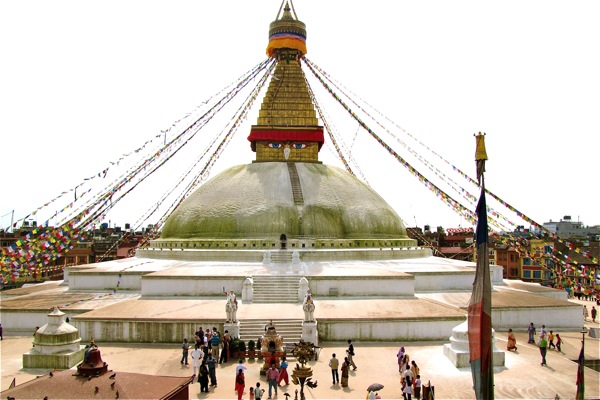 The Boudhanath Stupa is one of the largest Buddhist stupas (shrines) in the world. This ancient stupa is found in Kathmandu city centre, where it is surrounded by small shops and street vendors. To enjoy its view, you must go through a small side street where it will suddenly appear, towering before you, among many small temples with distinctive Buddhist prayer wheels. You can even walk on it, while watching the numerous visiting Buddhist monks. There really isn't any good restaurant here, but it is recommended to find one of the restaurants that have a roof terrace, so you can sit and have lunch overlooking the enormous stupa.
> Photo gallery
> More amazing temples 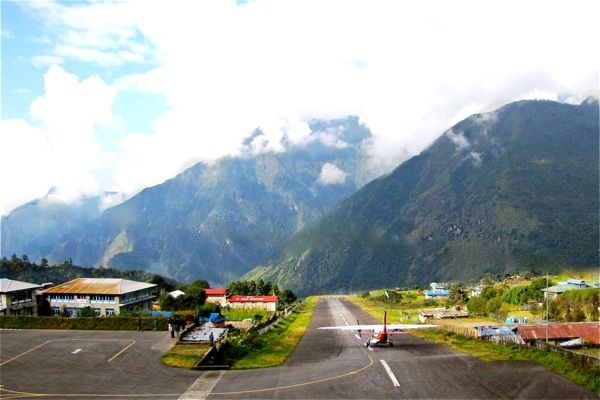 If you are going trekking in the Everest region in the Himalayas, a flight from Kathmandu to the tiny mountain town of Lukla is almost inevitable. This airport, renamed Tenzing-Hillary Airport, is on the top 10 list of the world's most dangerous airports - and there is a good reason for that. You fly to and from Lukla in small propeller aircrafts that do not even have life jackets aboard. But, of course, there is not much sea in the mountains, should you be unlucky. The airport is located at about 2800 m altitude, and the runway is only 460 m long. Upon landing, there is a risk of crashing into a cliff if the pilot is not quick enough on the breaks, and, at departure, you just pray the plane will take off when it drives out over a one-kilometre steep hillside. So hold your breath and pray for good karma. 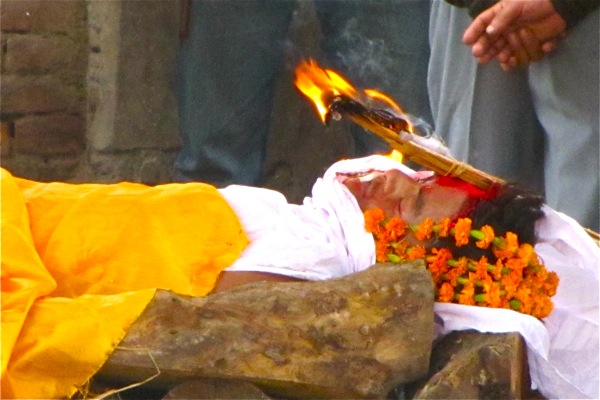 Just outside of Kathmandu city centre is Pashupatinath, where Hindu cremations take place along the river. Pashupatinath is composed of a large area with a lot of temples and so-called holy men in orange robes who sit and meditate. You can take pictures of the latter - but only against payment. As a tourist, it is more appropriate to be on the opposite side of the river and observe the cremation from a distance. For Westerners, it may be an overwhelming experience to see the locals burn their fellow man in public, but even stranger is to see people swim in the same river the ashes and the body remains are dumped in.
> Photo gallery
> More burial customs

© Vibe Sannig
When trekking in the Everest region in the Himalayas, a visit / overnight stay in the relatively large town of Namche Bazaar is almost mandatory. The city lies at an altitude of 3450 m, and there are some steep climbs up to it. The city attracts a large flow of tourists, meaning the need for transportation of goods is significant. This is done mainly by carriers, who carry up to 70 kg in big baskets on their backs. As a trekking tourist with a daypack of 7-9 kilos, you have therefore absolutely no reason to complain, but be thankful that you can get a cold, hard-freighted, beer when you reach the city. In Namche Bazaar, you can, among other things, buy lots of cheap trekking equipment, home-knitted socks, and super delicious pastries that can sweeten your trek just a bit.

© Vibe Sannig
Sagarmatha National Park is on the Natural World Heritage List and covers an area of approximately 1150 kmÂ² in the Himalayan mountains. The park's mountains have heights ranging from 2800 to 8840 m (Mount Everest peak), and it is this area you trek through if, for example, you go to Mount Everest Base Camp. You get nothing less than a breathtaking moment when, after many hours of hard trekking - typically from the town of Namche Bazaar, you spot the first sight of the Everest mountain range and Mount Everest itself. The best time to trek in this area is in October, when you will have the best chances of fine weather and sunshine.
> Photo gallery
> More mountains
> More national parks in Asia
> More trekking
> More UNESCO sites, Asia

© Vibe Sannig
Just outside of Kathmandu city centre, you will find Swayanabath Stupa, also known as 'The Monkey Temple'. There are plenty of sacred monkeys everywhere, and the temple complex is located on a hill overlooking the capital. Colourful prayer flags hang from the treetops to the temple tops, and nearby street vendors sell fruits and souvenirs. The area itself consists of a strange mix of different types of temples and shrines, and in one of the temples, you can see praying / meditating monks who sit and chant. Between the temples lie sleeping dogs, and Buddhists come here to sacrifice different kinds of food to Buddha by burning them.

Thyangboche in the Everest Region, Himalayas 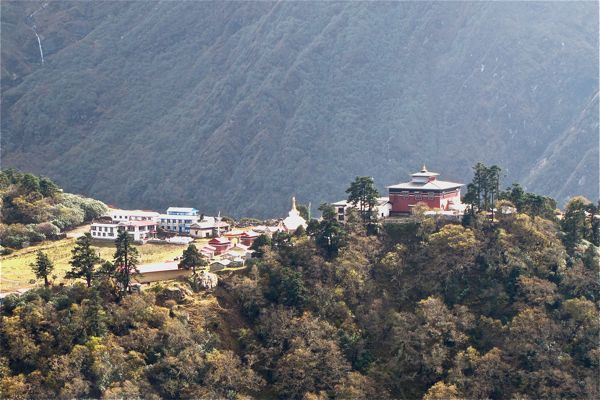 On a trek in the Everest region in the Himalayas, you may pass through Thyangboche, an isolated village at an altitude of 3860 m. This small settlement consists of only a few small tea houses, a bakery and an important relatively large Buddhist monastery, where around 30 monks live. As a tourist, it is possible to attend the monksâ€™ morning mass, that is, if you are fresh at 5.30am! However interesting, it is a freezing experience to sit quietly on the floor at the back of the colourful temple and attend the 45-minute mass. The monks (some of which are as young as 10 years old) shake from the cold and sit with blankets and hot tea while chanting along with the head lama to the tones of little bells and cymbals.