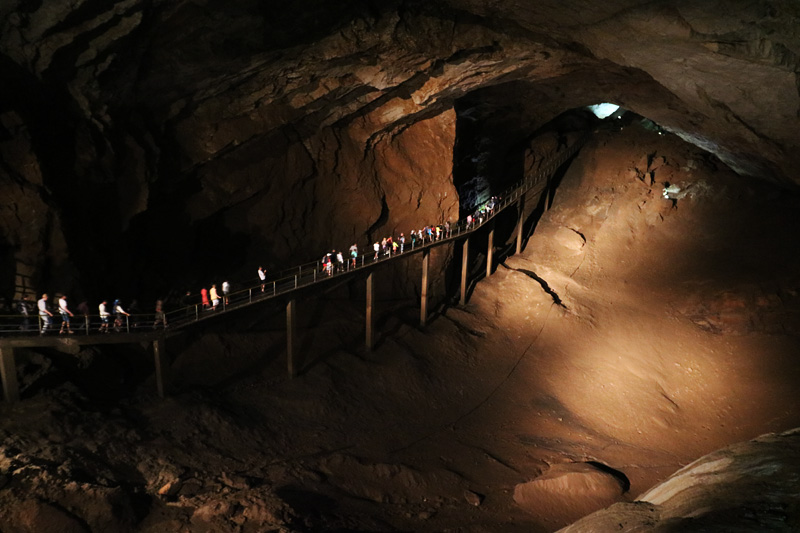 The cave in Akhali Atoni is recognized as one of the biggest in world. The main attraction is its sheer size, rather than the few stalagmites and stalactites. There are nine chambers measure up to 100 meters long and 40 to 60 meters high. You will enter and leave the cave system through an artificial tunnel in a small electric train. While inside the cave, you walk in guided groups (only in Russian) along paths and bridges. The guide do a lot of explanation, so the 1.4 km long journey last 1:15 hours. Bring a shirt, as the temperature below ground is 12° С.
> More caves 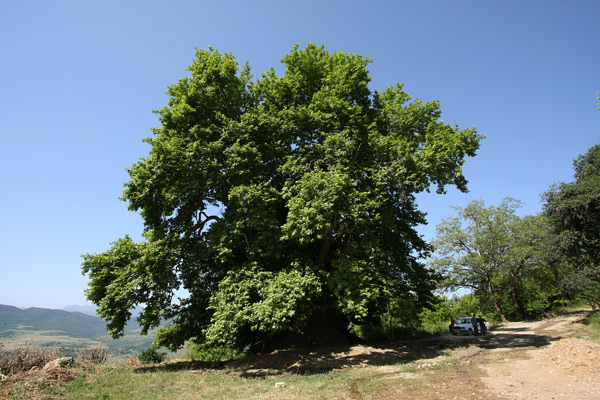 The locals call the giant plane tree near the Skhtorashen village Tnjri. It is huge, about 54 m tall (note the car to the right), and considered to be more than 2000 years old. The tree is hollow and big enough for an alter - some have apparently measured the inside to 44 sq m. It can seem surprising that the tree still stands, since the inner is sooty from centuries of fires, but maybe the natural spring next to it has something to do with its longevity. 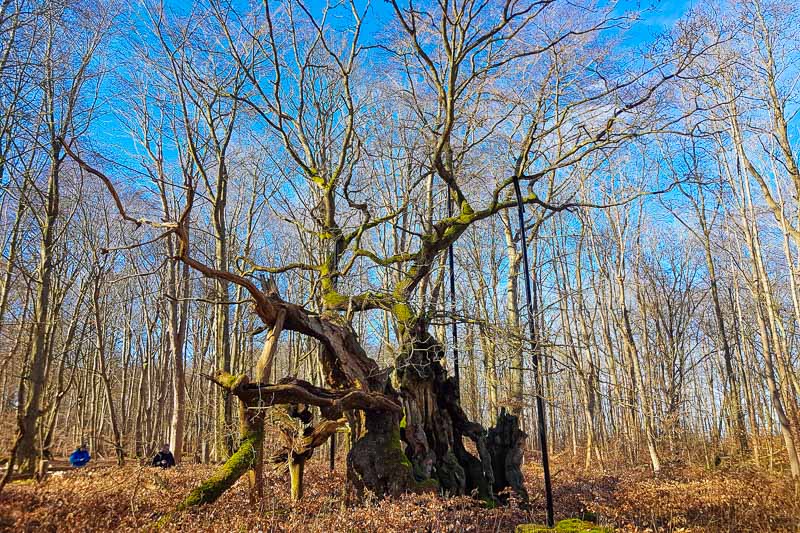 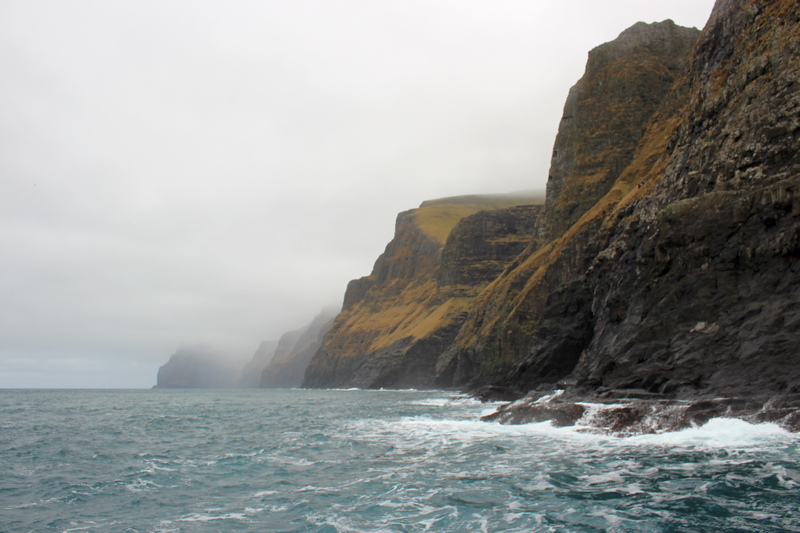 Set out on the rough Atlantic in a boat that seems way too small for the task, the captain steers skillfully out of the tiny Vestmanna Harbour and into the fjords. It's a short ride to the open ocean and one of the highlights of any trip to the Faroe Islands: The Bird Cliffs of Vestmanna, spectacularly towering almost 700 m above the small boat. Thousands of seabirds use the cliff as their breeding ground – and it's nearly as spectacular as the cliffs when a large flock sets off. Depending on the tour, the captain and the weather, the sail might include visiting free-standing rock formations, grotto explorations and fjord adventures. A few outfits even do grotto concerts on the boat during the less windy summer months. 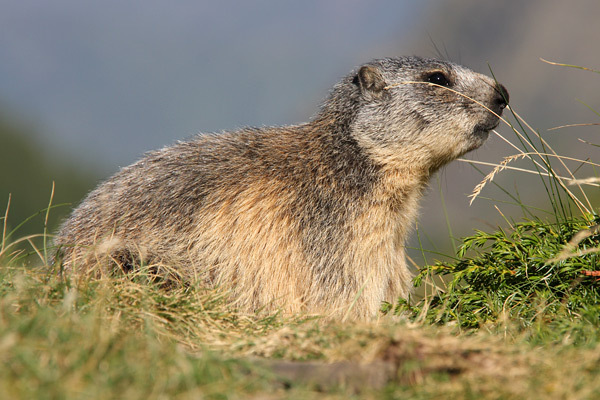 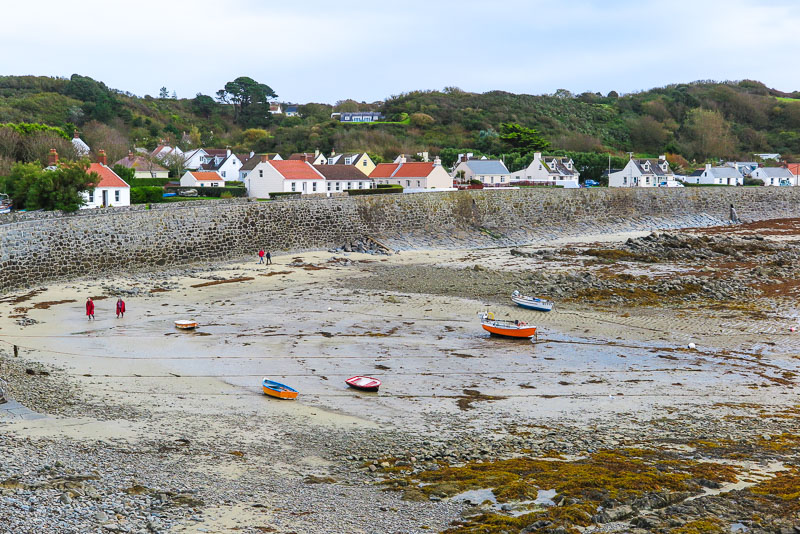 Guernsey's tidal range of 10 meters is one of the largest in the world. Roughly every six hours the coastline transforms dramatically. At high tide the harbours are filled with water and islets are surrounded by the sea. At low tide, boats stand on the sea bottom and you can suddenly walk to the islets. Before you venture out at low tide, know the tide times, so you don't risk getting caught at high tide. 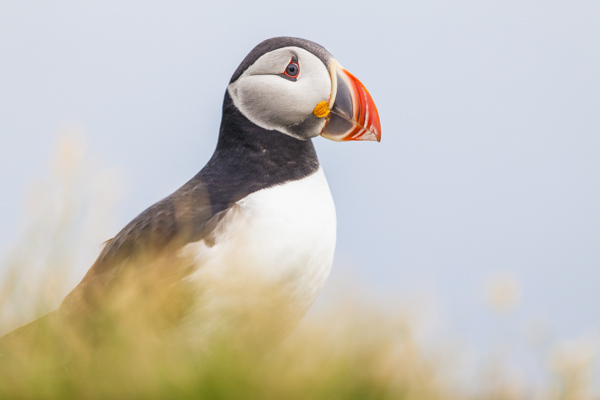 Látrabjarg marks the westernmost part of Europe, and is primarily famous for its enormous bird colonies. Most visitors flock here to see the ubiquitous Atlantic Puffins up close, and you really can see them up close: many of them will allow you to approach to within a few metres without seeming particularly bothered. The cliffs themselves are also stunning, 14 km long and sometimes dropping 440 m down into the sea. During spring and summer Látrabjarg is home to millions of puffins, northern gannets, guillemots and razorbills, making it the largest bird cliff in Europe. But don’t step too close to the edge – this is a very windy area, and people have disappeared here before. Getting here is half the fun, involving hours of driving on bumpy gravel roads, and once you have arrived it is hard to doubt that you have reached the end of the world. 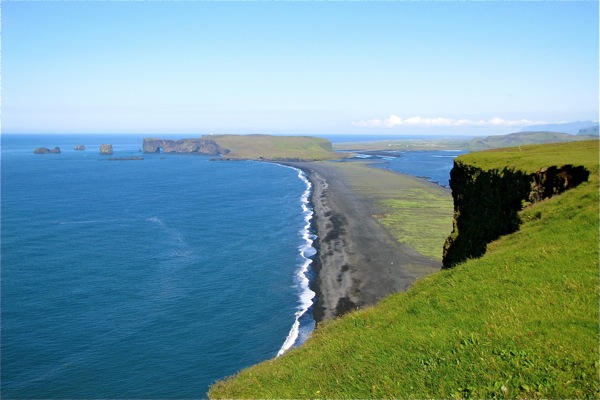 Dyrhólaey Peninsula lies just off the coastal town of Vík in the south of Iceland and is a giant volcanic rock. It takes approximately 5 to 10 minutes to drive to the top with a 4x4 car, and around 30 to 40 minutes to walk up there. The area is rich in birdlife, and especially in the summer time there is a very good chance of seeing puffins nesting. The view from the steep peninsula is quite impressive on all sides. You can see both the glacier Mýrdalsjökull, four distinctive, large lava pillars that rise from the sea, the whole coastline, the town of Vík, and the striking black arch, made of lava, where a member of Parliament once flew through. 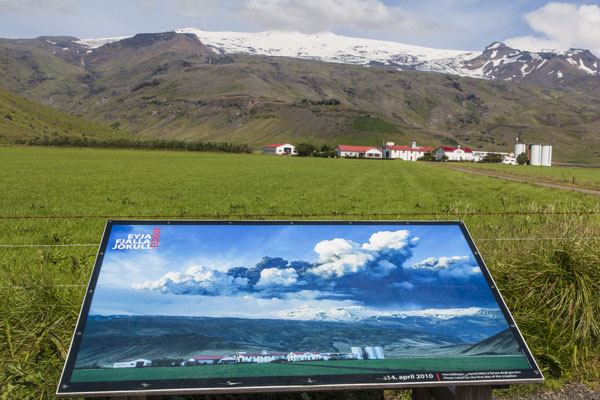 When Eyjafjallajökull erupted in 2010, the world stopped. Or much of Europe’s air traffic, at any rate. Locally, it forced the evacuation 800 people, and nearby farms were covered under a thick layer of ash. You wouldn’t know that when you drive past today, but there is a very interesting information centre just off the Ring Road – have a look at the 20 min video, narrated by one of the farmers. It is possible to hike up to the Eyjafjallajökull glacier and volcano, but it is a steep, full-day hike, and best not attempted without a guide. For those who don’t quite feel up to that challenge, and cannot afford to see it from the air, stop by the photographic sign in front of the farm – this will at least give you a good idea of what it looked like during the eruption.
> More active volcanoes 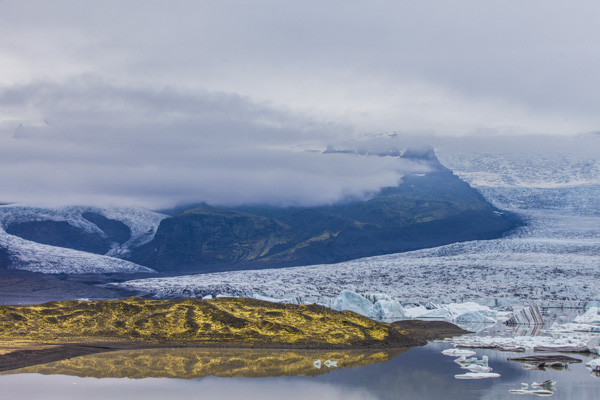 If the crowds at Jökulsárlón Lake are too much for you to handle, then fret not – only 10 km to the west is another, virtually undiscovered glacial lake. Smaller but just as beautiful, Fjallsárlón is a real gem. The smaller size means that the glacier – in this case Fjallsjökull – looks much larger than at Jökulsárlón, and the nearby mountains create a beautiful frame for the lake. Boat tours on the lake are the ideal way to experience this natural phenomenon, which is located only a kilometer off the Ring Road. Perhaps the best way to view Fjallsárlón is not as an alternative to Jökulsárlón, but as a great addition to it. After all, there is little sense in traveling this far and visiting only one of them.
1 2 3 4