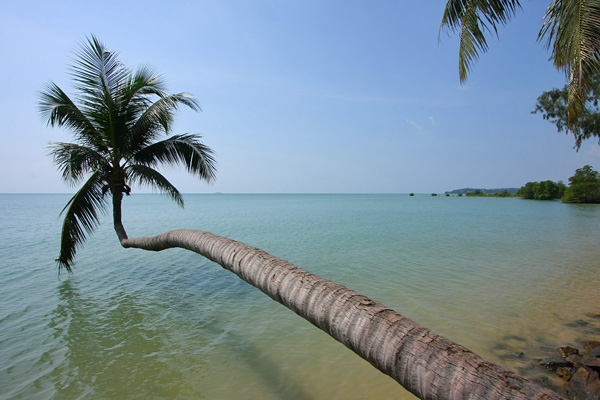 You can't say Ko Pha Ngan without saying Full Moon Party, but Ko Pha Ngan is a diverse island which has also secluded bays, dense jungle, waterfalls, and tranquil beaches for couples who rather enjoy each other instead of another firedance show. The party capital is Haad Rin where the rather trashed Sunrise Beach turns into a pumping dancefloor every evening. The sunset side of Haad Rin is rather calm and a good place to keep a walking distance to the party madness. The west coast is home to some beautiful stretches of sand with bungalows in any price range. Further north to both sides of the small fisher town of Chalok Lam are several low key beaches with a more alternative vibe. The ever more popular Bottle Beach (Haad Khuat) can be reached by boat from here. By renting a motorbike and ride the horrendous jungle roads across the island you will get to the two bays of Tong Nai Pan (Noi and Yai) which seems popular for families and relaxing couples. So you don't have to be a techno mad shoestring backpacker to enjoy Ko Pha Ngan, for it has something for everybody.
> Islands of Thailand guide
> Photo gallery 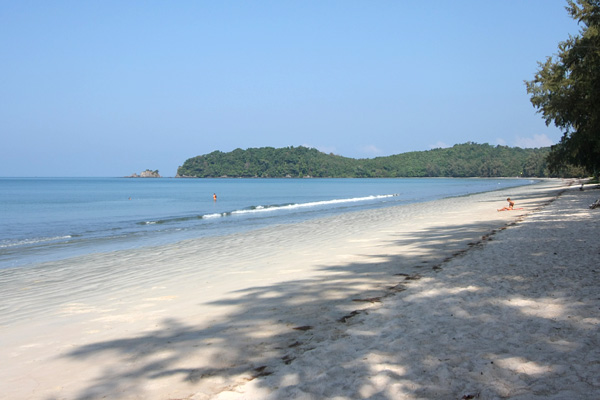 When you mention Ko Phayam to other travellers, most will think you mean Ko Pha Ngan on the east coast for Ko Phayam managed to be off the main backpacker and holiday trail. There is a couple of upmarket resorts on the island, but it's otherwise just palm thatched huts among the shady coconut palms and cashew trees along the almost deserted white beaches. There are no cars on Ko Phayam but a narrow network of path fitted for motorbikes. The island attracts a groovy crowd who has tried to hush down the existence of this little paradise. Besides hammock lying and spliff rolling, there is good birdwatching with chances to see hornbills and sea eagles. If you are looking for even more back-to-nature, try Ko Chang (little, not big Ko Chang on the east coast) a bit north or just Ko Kham a short boat ride from the Ko Phayam pier.
> Islands of Thailand guide
> Photo gallery 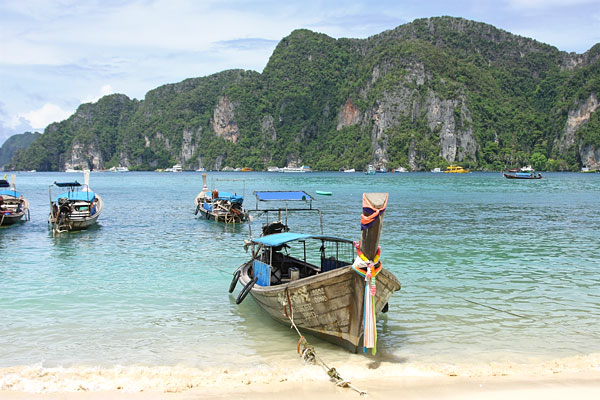 By reputation, Ko Phi Phi is the iconic beach paradise with sparkling white beaches, rugged mountains, and excellent snorkelling in aqua blue waters right at your bamboo bungalow. Reality is however a bit less glossy. Phi Phi has been solid on the tourist map for decades. What started out as a true backpacker hideaway is now taken over by Scandinavian families and Japanese package tourists in matching orange life vests. Hordes of daytrippers from Phuket descend on the popular beaches and fill the bays with tour boats. But yes, Phi Phi is still darn nice. So if it fits your wallet, please join the crowds on this slice of commercialized paradise.
> Islands of Thailand guide 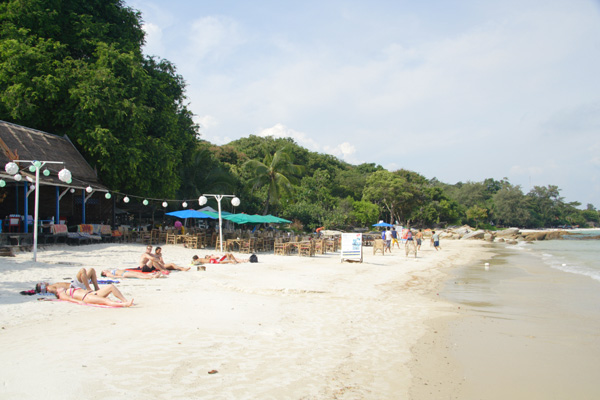 Tiny Ko Samet has what Thailand's islands are so famous for: sand, sea, coconut palms and bungalows - and even some coral reef. You can choose one of the upmarket beaches closer to the ferry dock or work your way further south to some of the more unspoiled spots. Though Ko Samet is not one of Thailand's best islands, it is still pretty darn nice and its proximity to Bangkok makes it an easy choice if you want to escape the city madness for a short time. You can start the day with banana pancakes in Bangkok and wash down the sunset the same day on Ko Samet. It is a popular destination for Bangkok residents in the weekend, so try to come here midweek if you want a more travel-minded crowd.
> Islands of Thailand guide 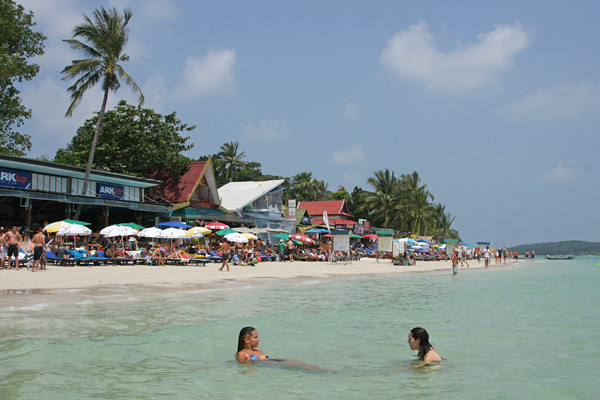 Ko Samui is the third largest island in Thailand and has been a favourite destination for holdidayers as well as backpackers for decades. It apparently has a lot to offer, but like many others we didn't manage to drag ourselves away from Chaweng Beach, the party capital of Samui. Here, the long stretch of sand and the colourful crowd make the days go by surprisingly quickly. The posh resorts attract grownups and honeymooners, while the young-at-hearts and beautiful (and those who once were) hang around the middle at the beach bars. Here, sun worshiping turns to sun-downers at sunset and later regular beach parties at night time. Else you can always find some pumping beats at the discos at the back where working girls, ladyboys, and Scandinavian flickor keep the male backpackers busy.
> Islands of Thailand guide 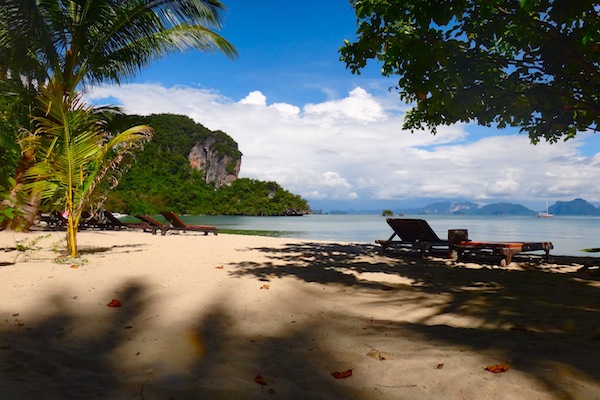 Ko Yao Noi is ideally located between Krabi and Phuket but remains a destination that few travel to. Its location offers uninterrupted views of the majestic limestone cliffs of Phang Nga Bay while also being an excellent base to explore nearby islands by kayak or boat without crowds. Life here has remained largely untouched by tourism and people still leave their keys in the ignition without a passing thought. Slow paced and friendly, Ko Yao is also home to an unspoilt coastline of pristine beaches, striking lagoons and scenic rice paddie fields. The island may be small, but it is diverse enough to offer an off the beaten track adventure or secluded beach retreat, all while enjoying the surreal beauty of the bay. A couple of yoga and meditation centres have also cropped up if inner discovery in a tropical setting is what you're after.
> Islands of Thailand guide

For an idea of the different beaches on Phuket, check out the photo gallery.
> Islands of Thailand guide
> Photo gallery

A short boat ride from Ao Nang or Krabi 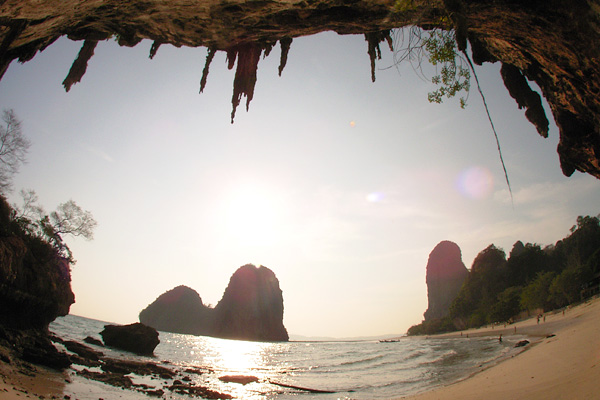 Railay is a beautiful peninsula fenced off by steep limestone cliffs and turquoise sea. The steep cliff walls is a climber's mecca and attracts world-class climbers along with a mellow crowd in the wake. Expect a lot of Bob Marley, John Johnson and fire dancing in the evening. Railay beach is actually four beaches: Tongsai where the hardcore climbers hang out, East Railay which is more mangrove than beach, the broad West Railay which is the main stretch of sand for backpackers and flashpackers, and the gorgeous Phra Nang Beach which is famous for its overhanging cliff formations right on the beach. Railay is only reachable by boat which creates a happy island vibe. 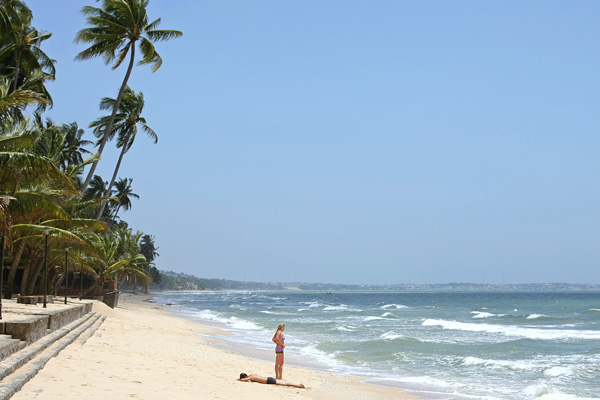 Mui Ne is a funny beach town. Not really a town, but rather a long road only separated from the white sandy beach by coconut palms and a single row of resorts. It begins at the fishing village and sprawls for some 10 km. Once it was a hideout for wind- and kitesurfers (apparently it is one of the best spots in Southeast Asia), but these days resorts are fast taking over the beach front. Russian tourism is a big thing here, so don't be surprise to see signs in Cyrillic. That said, Mui Ne is very long and there is space for everyone, so you can easily find a deserted stretch of sand or chilling with the surfers, if stiletto wearing Russian bikini models is not your thing. Beside looking at the kitesurfers (or try to learn it yourself) the only other sights are two huge sand dunes inland, respectively 3 km and 28 km away.
1 2 3 4 5