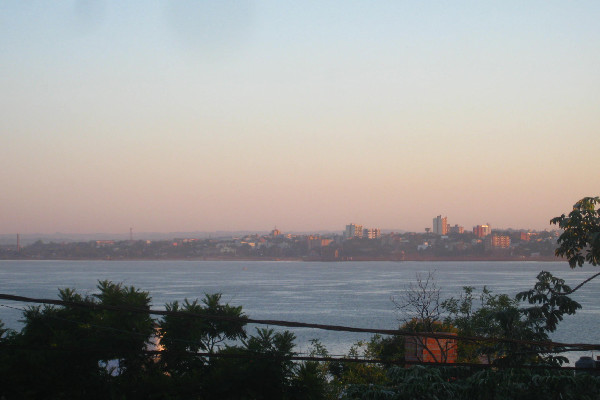 Crossing over the Parana River from Posadas, Argentina to Encarnacion, Paraguay, you get the feeling that you have crossed into another world. On the Argentine side the buildings are tall and shiny, the streets alive with people, lights and music and the roofs topped with bars overlooking the river. However as soon as you step off the bus after crossing the very elaborate Puente Roque Gonzalez de Santacruz Bridge, clutching your newly acquired Visa, the streets turn a red, dirt colour and the effectiveness of the Argentine garbage removal system disappears. With many border crossings in South America the landscape and scenery separating the two countries is quite similar and the feeling of entering a new, foreign state lacks. However crossing from Argentina into Paraguay gives you the feeling that you have caught the bus one stop too many leaving civilization behind you. 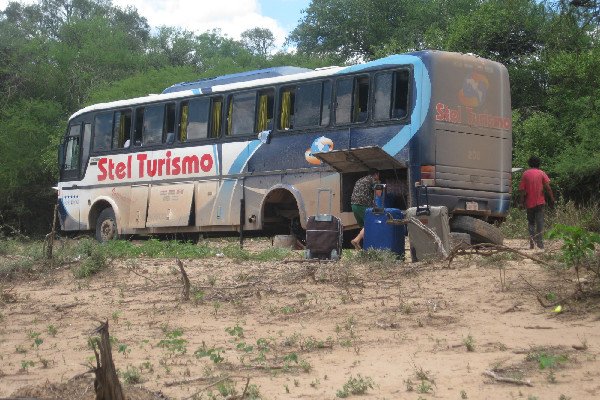 If you want to travel like a local through South America then this is the bus route for you. The Trans-Chaco Hwy is one of the only sealed roads that leads north out of Paraguay. Trying to find a timetable/ticket office for the route to Sucre, Bolivia from either Asuncion or Filadelphia, Paraguay is hard enough. The key to this journey is to be very, very patient. From Mariscal Estigaribbia (closest town to Bolivian border) the bus arrives at 4am and doesn’t leave until 5:30am due to passport control consisting of one man, grumpy from being woken up. From here the bus has the potential to stop 6 times, four of these stops for immigration, security checks and so on and the other two for break-downs. Make sure you give yourself a couple of days as the trip can take anywhere from 6hrs-36hrs considering how many times the bus breaks down.

Well, on the border 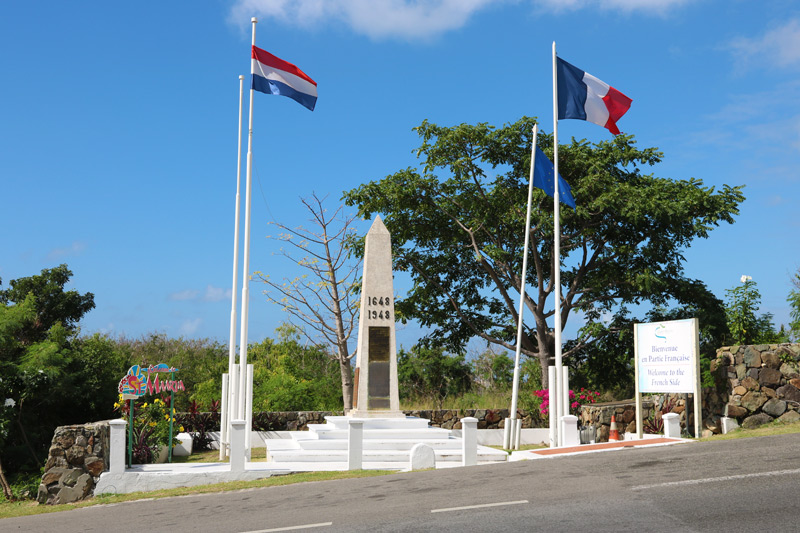 The island of St. Martin is split into two sides, the French Saint-Martin and the Dutch Sint Maarten. The two separate sides are run as two different countries with different currencies (EU on the French and Netherlands Antillean guilder on the Dutch) though USD are widely accepted most places, and different language (French and Dutch/English). There are four border crossings, all open with no checkpoints whatsoever. Just some flags and a change in the the road condition (good on the French side, potholed on the Dutch) indicates that you have moved from one side to another. 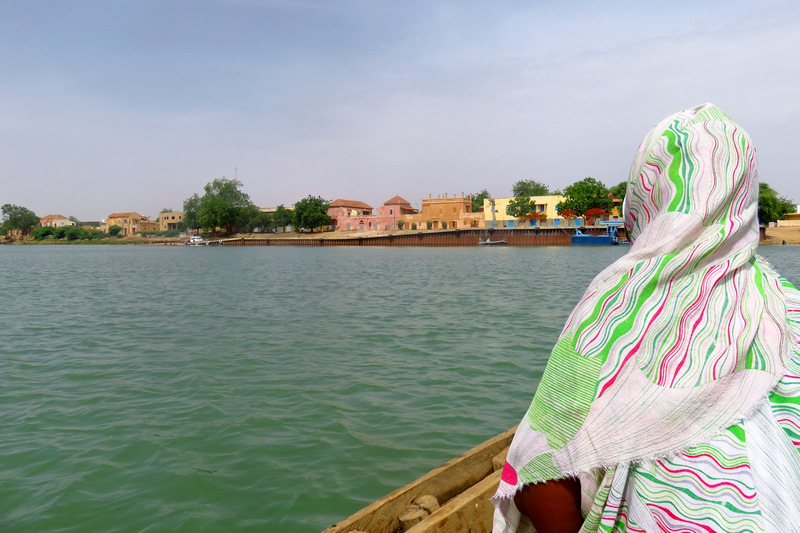 The main border crossing between Mauritania and Senegal, at Rosso, is notorious for corrupt officials, hustlers and for being a dump of a town. This on both sides of the border. So why not cross the border 100 km to the east? Here are no hustlers and the border officials are friendly and helpful in all kind of matters (even if you have overstayed your Mauritania visa, as we found out). Best of all, the setting is a pretty colonial town. The border crossing itself is done by crossing the Senegal River in small pirogues from the renovated colonial port. Podor deserves a short visit in its own right and due to the scarcity of transportation here it's probably necessarily to spend a night regardless. One or two taxi-brousses go directly between the village of Leksaiba II on the Mauritania side, while transportation to Saint Louis from Podor leaves at first light. Alternative, it's possible to make the trip between Podor and Saint Louis in smaller stages in less than half a day. 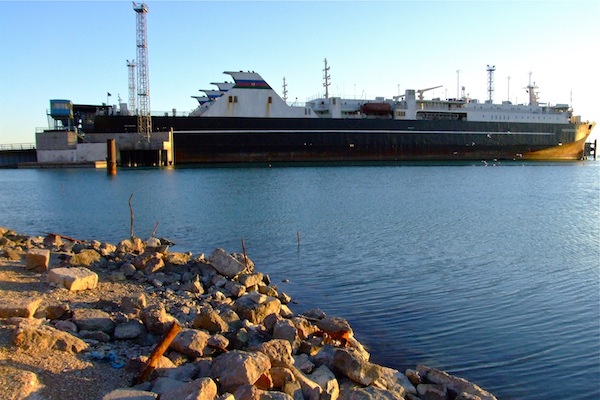 For hardcore overland travellers, getting from Central Asia to the Caucasus can be a challenge. To the north lies Russia which poses the near impossible task of getting visas while on the road. To the south is Iran, which some nationalities have serious difficulties getting into at all. That leaves crossing the Caspian Sea as the only alternative. Luckily, the Turkmen seem to have figured this out. Cargo ships leaving the port of Turkmenbashi headed for Baku, Azerbaijan will take passengers (for a fee). Information is scarce as there are no schedules. And on a 5-day Turkmen transit visa, waits of days at the port could be a serious issue. But for those with a bit of luck, the boat trip makes for some serious bragging rights.
> More boat journeys

Between Western Sahara and Mauritania 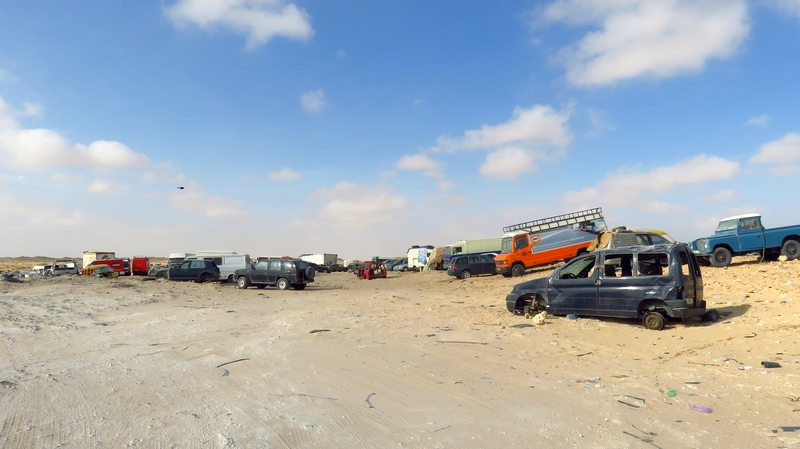 Ever wondered what a post-apocalypse wasteland would look like? Look no further. Crossing the border between Western Sahara and Mauritania is probably your best chance to experience the post-apocalypse first hand. The approximately four kilometres of dirt tracks between the two border posts are officially named No Man’s Land, given any potential residence there a cool address. The whole area is littered with thousands of old cars and, strangely, old televisions. The best explanation for the dumped cars is that they are stolen European cars that were too expensive to import to Mauritania and have there been left "outside" the country, then ripped for spare parts. We have no idea about the televisions. Adding to the feeling of Armageddon are the tens of thousands of landmines that still curse the border area. Tourists and locals alike have been killed here, by mines, during the last decades by straying too far off the tracks. However, anyone sticking to the well-worn tracks should be safe.

On the border of Zambia and Zimbabwe 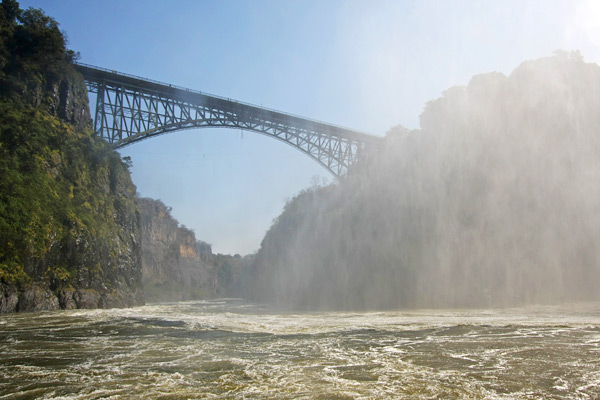 Victoria Falls Bridge spans from Zambia to Zimbabwe over Zambezi River right below Victoria Falls, one of the wonders of the world. The view of the falls from the bridge is just spectacular, making it one of the most scenic border posts on the planet. The 124 m high steel bridge, which was constructed in 1905, is mostly famous for the 111 metres bungee jumping, which many backpackers consider a must-do. In 2011, the cord snapped for an Australian woman, who miraculously survived the accident. Afterwards, the Zambian tourism minister did the bungee jump to prove that the money-making-attraction was again safe. There are border posts at each end of the bridge, but it's possible to walk out without getting stamped out (and the trouble of getting another visa).
1 2