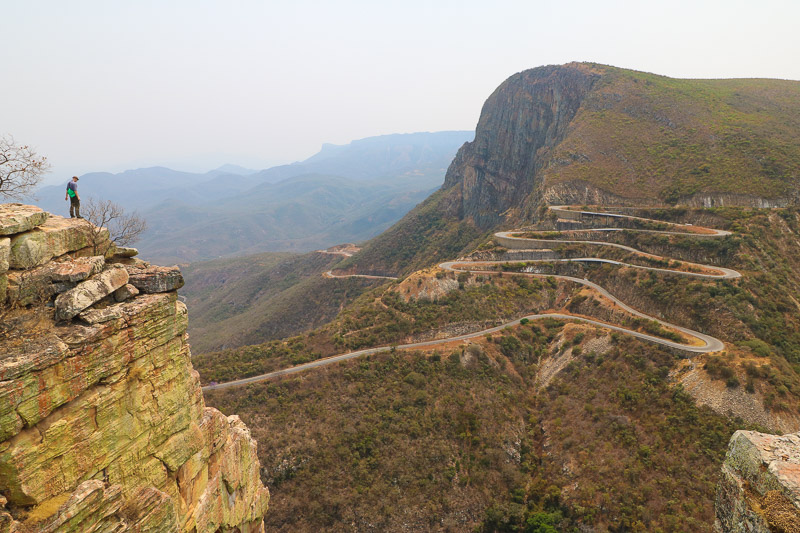 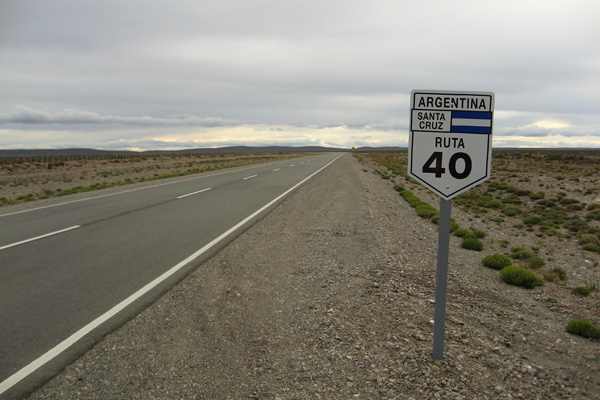 National Route 40, or just Ruta 40, is more than 5000 km long and just one of these classic routes of the Americas. Nowadays a large part of it is paved so the trip might not be as rough and romantic as it once used to be but still, it's a great way to travel from Northern to Southern Patagonia. It gives you a better idea of how vast Patagonia actually is. The classic part of Ruta 40 is between Bariloche and El Chalten, roughly 1300 kilometres long and takes about two days. There is just no end to the infinite sceneries with hills, mountains, lakes and sometimes a farm with sheep or guanacos. The halfway point where many people end up staying overnight is Perito Moreno, an insignificant town not to be confused with the glacier that bears the same name further South.
> Patagonia guide
> Photo gallery 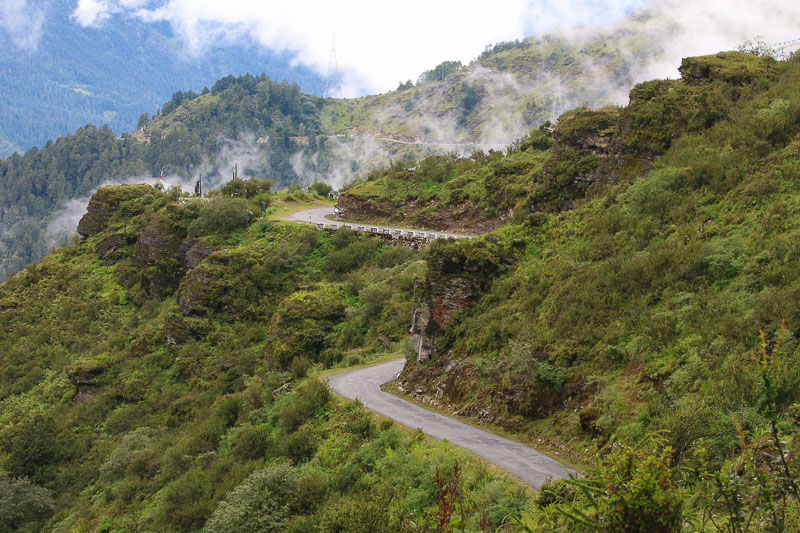 There are many spectacular road trips in Bhutan. Both Thimphu-Punakha and Punakha-Gangtey mountain "highways" are two of the most popular ones, but the Chhudzom-Haa road is also of outstanding beauty. Common for them all are the winding road chopped out of the mountainside with a raging river below. Every bend offers new majestic views of pristine forest, lush valleys with small villages, and cloud covered mountain tops. Prayer flags hang along the road, while streams power prayer wheels. Even though the roads are in general good condition, there are sections which has been damaged by the frequent rock falls and mudslides. 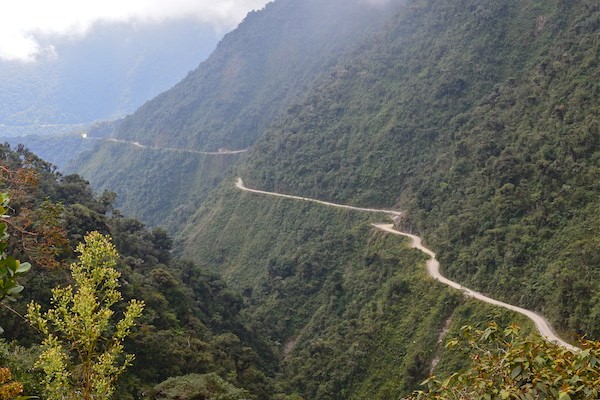 About 56 km, northeast of La Paz, lies a stretch of road names North Yungas Road. The road, however, is much better known by its nickname - The Death Road. By some estimates, some 200-300 travellers lost their lives on this 60+ km stretch of road. This makes it the most dangerous road on Earth. These days, there isn't much traffic other than adventure seekers on their mountain bikes. The trip takes you from 4,650 meter above sea level at La Cumbre Pass, down through cloud forest to near tropical temperatures outside the town of Chulumani. If the the pile of waivers you sign to do the road are any indictor, even the tour can be dangerous.

Starting and ending in Kralendijk 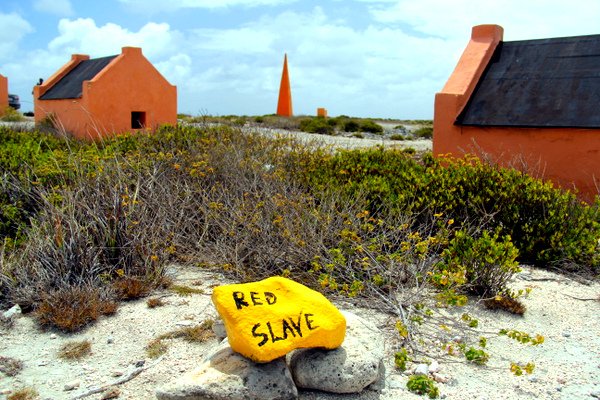 The southern part of Bonaire is flat, arid, very lightly populated and with a rugged coastline. But it holds many interesting sights and landmarks important to Bonaire's history that can be enjoyed by following a southern loop along the coastline (we recommend renting a scooter, the most flexible option). It shouldn't take more than an hour to circle the entire loop without stopping, but all the fun IS stopping and exploring along the way. Starting by the east leg of the loop, the road goes through thorn bushes and giant cacti territory with goats roaming everywhere. It then follows Lac Bay and some mangrove areas where flamingos can often be seen, down to the beach at Sorobon, a windsurfers favourite. The rest of the leg until the southernmost point is as barren as it gets. Then start appearing the yellow rocks pointing to dive sites on the west coast. Inland, the pans are a surprising sight, especially at sunset, with their pink lakes and bright white mounds of salt. Salt harvesting has been a major industry in Bonaire for many centuries. At first, the hard work was done by slaves, and the obelisks and huts are a grim reminder of these times. The four different-coloured obelisks along the coast used to direct the ships to the proper areas for loading salt, while the tiny huts sheltered the slaves after a long day of work (it's almost impossible to imagine they crammed six of them in such a small space). And we're back to modern times at the end of the loop when the road goes by the airport and re-enters Kralendijk.
> Photo gallery

The bus journey from Manigango to the Dega, close to the Tibetan border, must rank as one of the most beautiful road trips in the whole of China. Setting out from the small Tibetan wild west town of Manigango, you will first pass the serene mountain lake of Yilhun Lhatso at the foot of Chola Shan (6168 m) and neighbouring snow caped peaks, before slowly ascending the hairpin road to the mountain pass at 5050 m (though our altimeter showed only 4850 m). There are chances to sight both vultures and marmots – and the occasional overturned truck having gone over the edge and crashed down the mountainside. When reaching the pass, locals will (if they are not too carsick) throw colored prayer notes out of the bus windows. From here, the road descends into a beautiful narrow valley carved out by a still flowing river. You will pass by small Tibetan villages, Buddhist stupas and monasteries with prayer flags going in all directions, before arriving (hopefully) safely in Dege.
> Tibet guide
> Photo gallery
> More Tibetan places outside of TAR 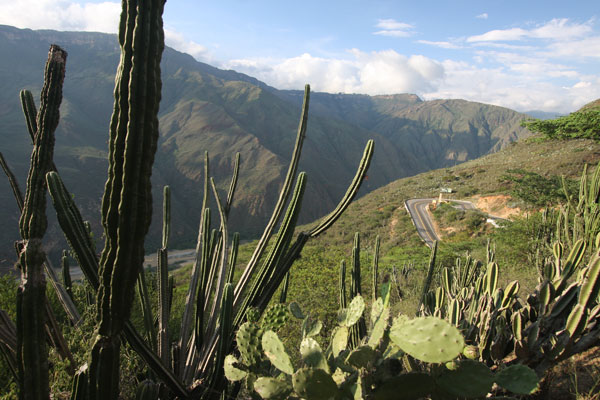 Colombia's Grand Canyon. A gorgeous canyon with a river cutting through at the bottom almost 2000 meters below. The slopes are steep and covered with wonderfully shaped cactuses. It is now possible to take in the beauty by classy cable car, else the winding road that traverses the canyon will give excellent views from both the summit and bottom. The serious hairpin turns seem never-ending and are either to-die-for for motorcyclists or sickening for those stuck in a bus. It is just one of those splendid routes that Colombia has so many of. 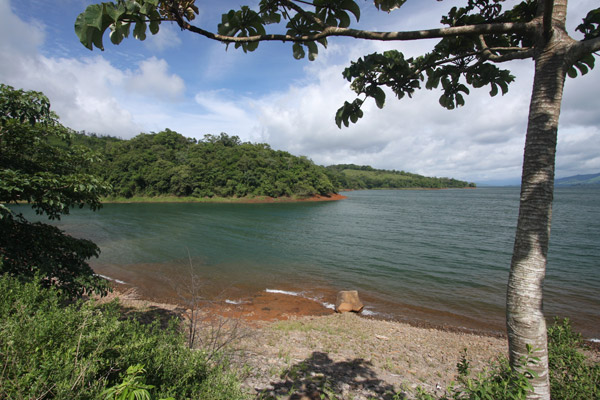 Another pretty area in Costa Rica. A beautiful lake with islands and bending shores covered in jungle with patches of ochre red clay. There are plenty of arty shops and accommodation around the northern side of the lake, though a day trip semi circulating the lake will give more views than most can handle. The winding road goes up and down like a roller-coaster ride through dense forest and open pastures, and can be a part of the trip to Monteverde cloud forest from the Volcano Arenal area. 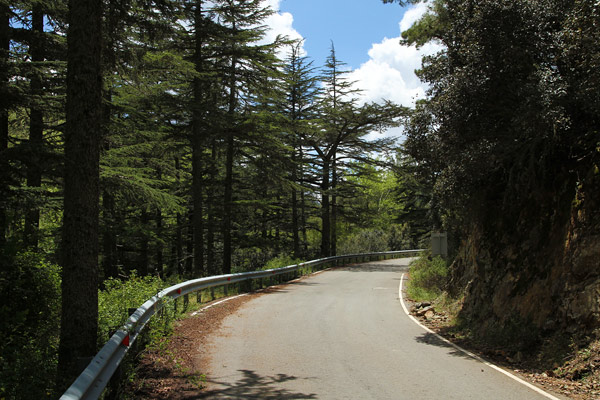 The Troodos Mountains have some world class mountain roads. Narrow winding roads which zigzag through cedar tree covered mountain slopes. Here and there the forest opens up for amazing panoramic views over the Troodos Mountains and lowland Cyprus at the coast. The most popular routes are sealed, but drive slowly and carefully since pretty much every turn are blind and there are a plenty of small rock falls.

Driving on the beach 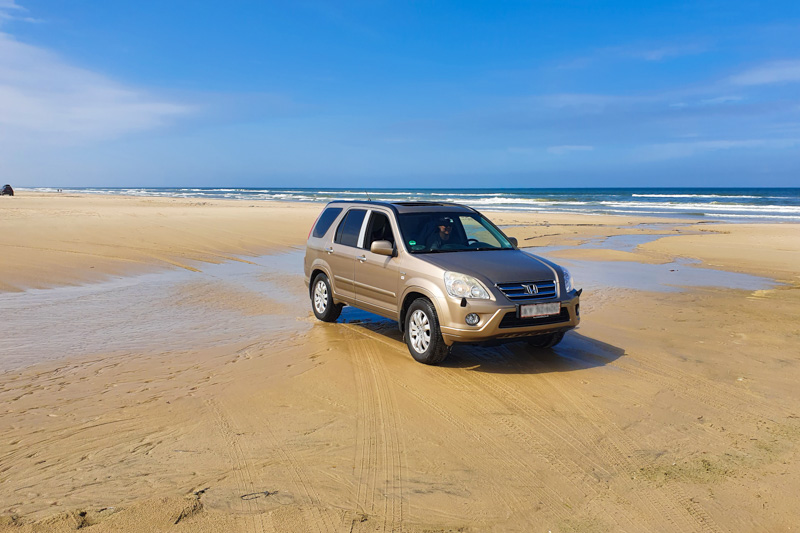 There are very few places in Europe where you legally can drive on the beach, but the westcoast of Jutland has some. One stretch of auto beach starts at Rødhus Klit and continues 15 km to Grønhøj Beach right next to the popular holiday town of Løkken. Along the way you need to cross a few shallow creeks, but you don't need a four wheel drive. Just stick to the hard sand close to the water line, if you only have a two wheel drive. The most adventurous can sleep in the car on the beach at Blokhus (also legal). Of course, you need to check the conditions before you drive off.
1 2 3 4 5