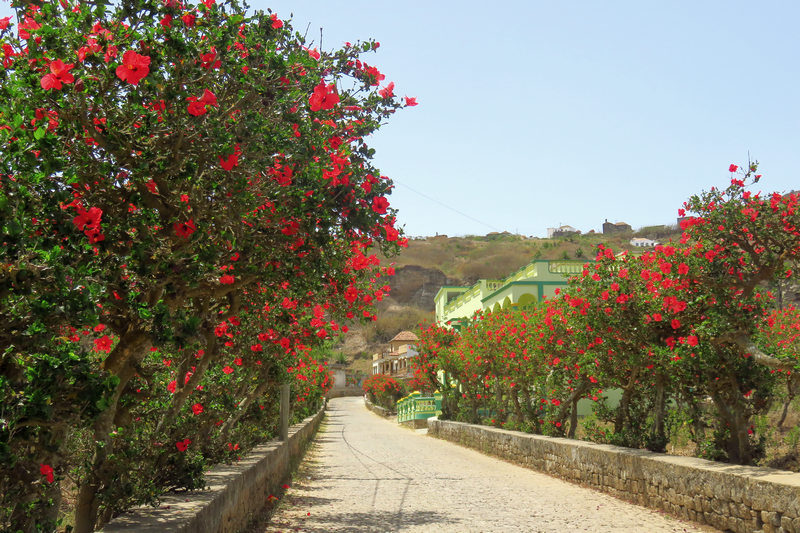 Small enough to walk around on, Cabo Verde's smallest inhabited island rises steeply out of the Atlantic Ocean. Thus hiking here has its ups and downs that will take your breath away due to the island's mountainous nature. The views of the island's slopes, its coastline, villages and to nearby Fogo are all magnificent on clear days. On cloudy days, any hike on Brava will be a walk in the clouds while the lazily drifts past the island's mountain tops. However, at any time will the cobblestone roads, lobelia flowers and mountainside villas make for idyllic hikes; one that feels more like the 19th century than the 21st. From the main town of Vila Nova de Sintra, beautiful walks are everywhere but recommended hikes include the walks down to Vinagre, up to Nossa Senhora do Monte, and across the island to Fajã d'Agua and Tantum. Be aware that walks here a longer than they look on the map given the winding nature of the roads and paths. 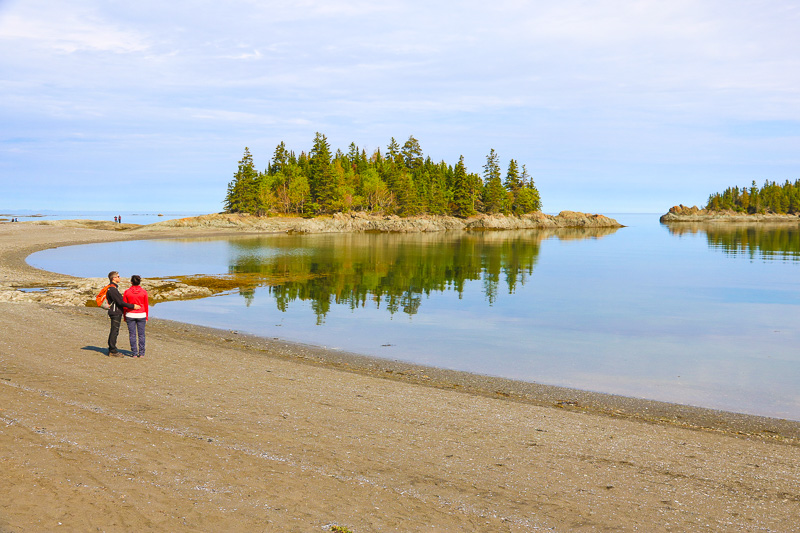 Set on the south shore of the St. Lawrence River, this smallish (in Canadian terms) national park boasts a beautiful coastal landscape of headlands, coves, islands and mountains. It's home to many seabirds and large populations of harbor seals and gray seals. There are plenty of both hiking and bicycle trails in summer and cross-country skiing and snowshoeing trails in winter. Le Grand Tour (8.7 km, 3 hours) hiking trail is really diverse and will take you along the rugged coastline, past beaches, on steep and narrow cliff tracks and through forest. Accommodation within the park range from camp sites and rustic shelters to yurts and cabins.
> More national parks in North America 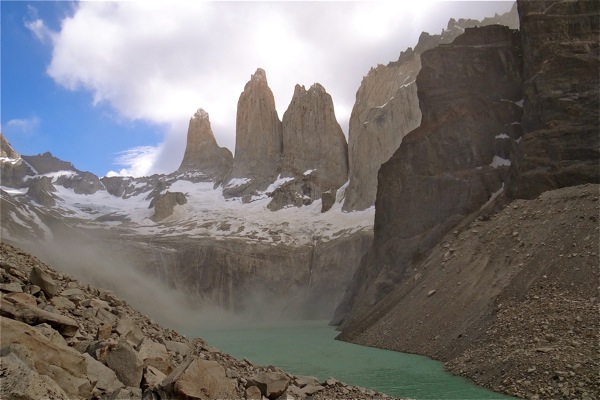 If you go trekking in Torres del Paine National Park, it is a must to "climb" - or at least hike to the base of - Torres del Paine mountain range with its three pointy mountain peaks. It is a beautiful sight to see the three towers throne towards the sky with the ice blue lake below, where glacier water accumulates. The South, North and Central Towers, as they are called, are about 2200-2500 metres high, made of granite and created by glacial ice. There are fairly good hiking trails in the area, while the last path to the towers is somewhat more impracticable. But the view from there is really worth it!
> Patagonia guide 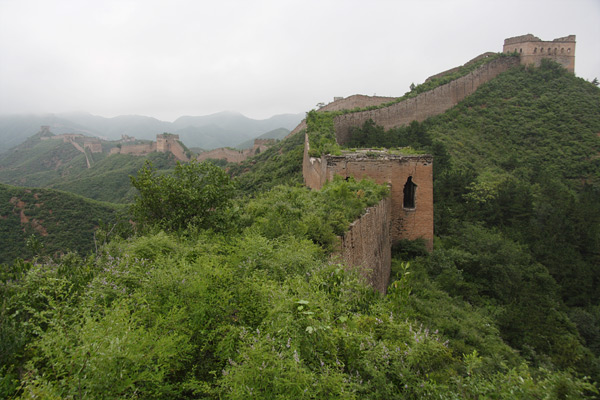 From Gubeikou pass, The Great Wall stretches in two directions, east (the so-called Wohushan Great Wall) and west (the so-called Panlongshan Great Wall). The Panlongshan Great Wall is an authentic wall section originally constructed in the 6th century by the Qi Dynasty, but hasn't been rebuilt since the Ming Dynasty (1368-1644). At first, it is just an overgrown and crumbled adobe construction which hardly can be recognized as a wall, but further on towards Jinshanling it will shape up and become a real wall in bricks with towers and steps.
You can trek along the wall from Gubeikou to Jinshanling (or opposite direction) which can be done within a day. The distance is 10 km and there are 56 towers in total. After the first 25 towers, the wall will become off limit for another 25 towers, due to military installation, and you need to detour through the corn fields below.

The wall at Jinshanling is probably one of the most exciting sections of the Great Wall of China. Near Jinshanling village, the wall has been renovated and is therefore very groomed, with cable car and outdoor loudspeakers playing Celine Dion. Going West towards Gubeikou, the wall quickly becomes naturally overgrown and decayed. Going East towards Simatai, the wall again becomes a bit deteriorated with loose surfaces but more winding with steep sections and plenty of stairs. This section offer great views of the snaking wall jumping from peak to peak until it disappears into the horizon, the image most people associate with the Great Wall of China.
You can walk on the wall all the way from Jinshanling to Simatai, a distance of 5 km, a trek that is quite popular these days.
> Photo gallery 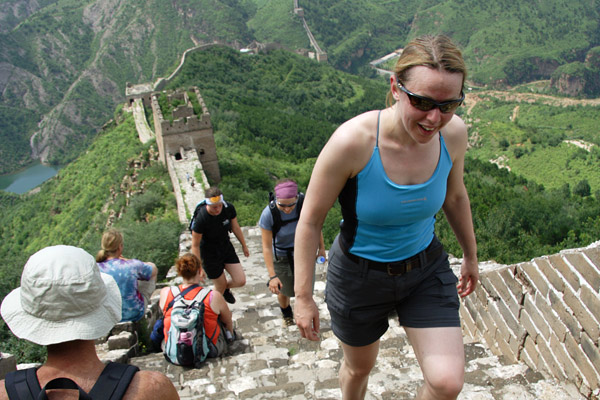 The Great Wall of Simatai shares history with the sections of Jinshaling and Goubeikou, since it is a part of the same defense of the strategic pass of Gubeikou further west. It connects with Jinshanling in the west through a challenging section that is rough and winding with loose bricks. Though the west section is steep at some points, it is nothing compared to the east section. Here, the wall clings to the mountain ridge at an angle up to 80 degrees (earning the name Heavenly Ladder), passes over a natural bridge limiting the width of the wall to only 50 cm (Sky Bridge) before it reaches the high Watching Beijing Tower (986 m), where it should be possible to see all the way to Beijing 120 km away on a clear night (clear sky, in China?). This last wall segment (including Heavenly Ladder and Sky Bridge) is unfortunately off limits due to the obvious danger, so it is not possible to test the claim, but the climb up to the forbidden part is still rewarding - and hard.
> More UNESCO sites, Asia

The region around Man 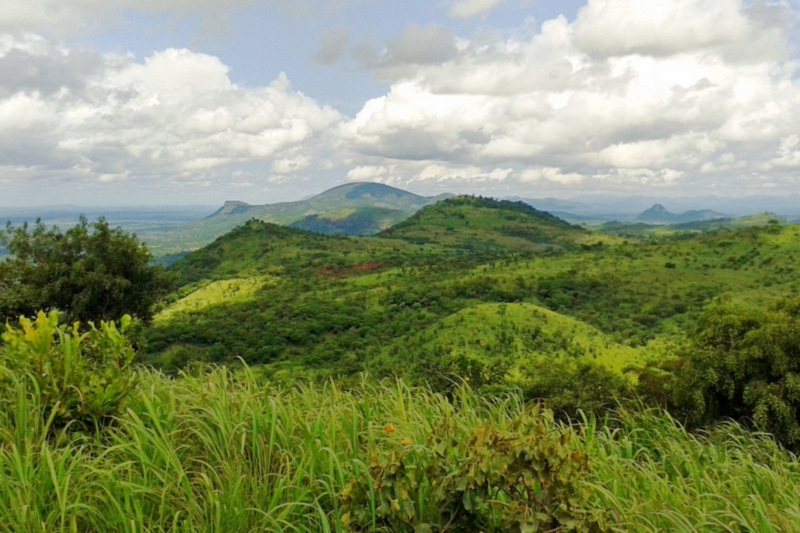 Most of Côte d'Ivoire is flat. The exception is the aptly named Région Dix-Huit Montagnes (Eighteen Mountains) bordering Guinea and Liberia in the western part of the country. The region isn't only the greenest and most pleasant temperature-wise, it's also the best place in Côte d'Ivoire to hike and trek. Just five kilometres to the north-west of Man is Les Cascades des Zadéplau waterfall. A further 7.5 km to the north-west is Mont Tonkoui (1,223 m), meaning "the Majestic Mountain", which can be scaled in a day by climbers and hikers accompanied by a guide. An easier target is Le Dent de Man (The Tooth of Man) just 5 km north-east of the town. Further afield, on the border of Guinea is Côte d'Ivoire's highest peak, Mont Nimba (1,752 m). This takes more planning and hikes to the top should be arranged in either the town of Danané or the border village of Gbapleu. It's well worth the trouble as the UNESCO-recognised mountain offers gorgeous views of the region as well as into both Guinea and Liberia. 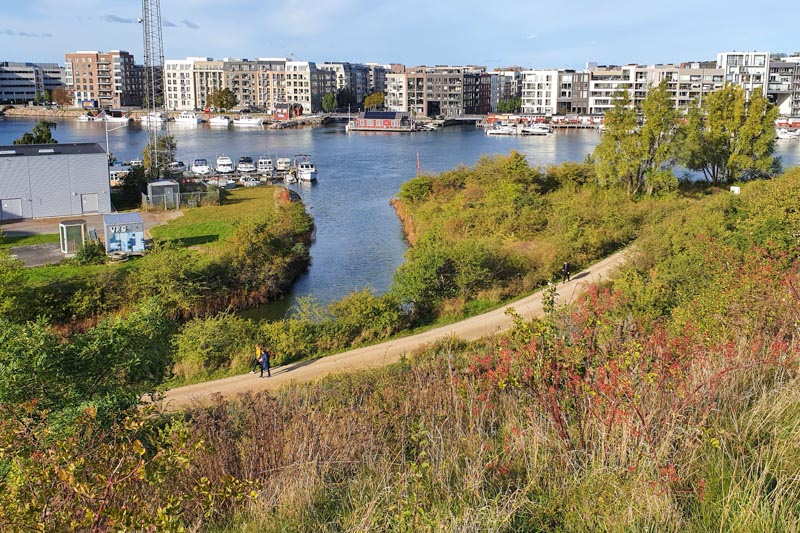 Everyone knows the Spanish pilgrim route the Camino, but have you heard about the Amarmino? To attract more people to the nature around Copenhagen clever marketing folks have named a 29 km long route on Amager, the Amarmino. The hike starts at DR-byen (the Danish Broadcasting corporation) in the north, just 4 km from Copenhagen Town Square, and follows trails across Amager until you reach the cute fishing village Dragør in the south. The route is surprisingly diverse and easy to follow as it's marked with signs all the way. The first section takes you past the new development at Sluseholmen and under the highways. From here the route follows the coastline for a while, before it takes you along meadows with grazing cows on a backdrop of Ørestad's skyline. The open landscape is an important bird sanctuary, where rar migration birds can be seen. The route then continues through woodlands and birch forest, until you again hike along the windswept coastline. The route breaks off into the forest at Kongelunden, where it swings by one of the big wooden giants made by the scrap artist Thomas Dambo. The last stretch follows the beach trail, which is wedged between houses and the Baltic Sea. Eventually you will end up in front of Dragør Badehotel, where the journey ends. It will probably take about 6-7 hours to do the full hike. Spend some time in picturesque Dragør before catching the bus back to Copenhagen.
> Copenhagen guide 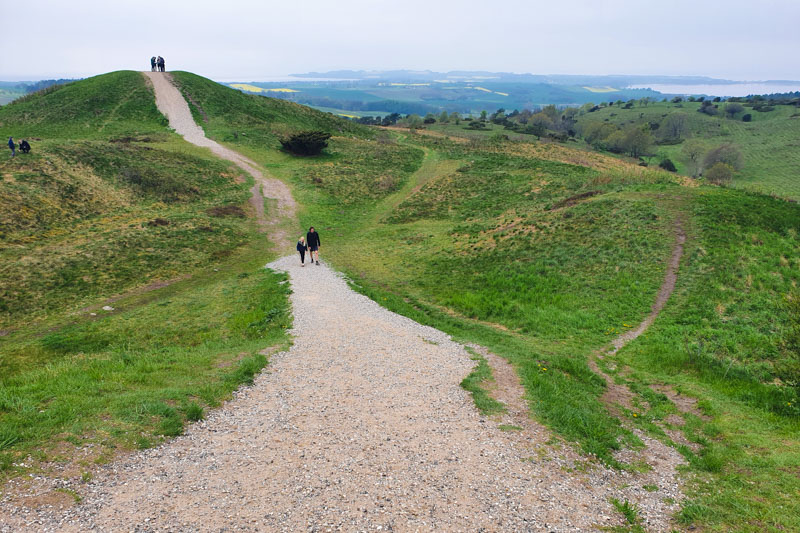 The National Park is called "Mols Bjerge" in Danish, which literally means Mols Mountains. And though the highest point, Agri Bavnehøj, is merely 137 meters above sea level, the area is among the most hilly in Denmark. The national park covers both moors, forests, and meadows, but also coastal areas and villages. There are several historical sights, like Kalø Castle Ruin and Ørnbjerg Water Mill, and barrows and burial mounds from the Bronze Age can be seen throughout the landscape. More than half of all wild Danish plant species can also be found here. Hiking at Mols Mountains is some of the best in Denmark, with many various trails traversing the hills. The most famous trail is the 60 km long "Mols Bjerge sti", which is enlisted among the "Leading Quality Trails - Best of Europe". The trail has 3 sections of 20 km each; the "Bjerg-etapen" (the mountain section), "Kalø-etapen" and "Ebeltoft-etapen". But there is a trail for everyone. 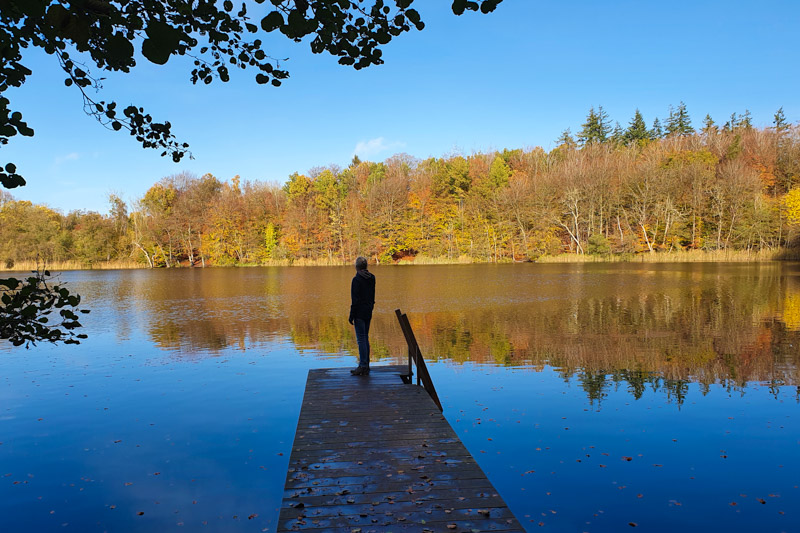 The Skjoldungestien is considered one of the best hikes on Zealand. The 30 km route connects the train station in Hvalsø with the train station in Roskilde and takes you through some of Zealand's finest landscapes shaped during the last Ice Age. If you want to break the journey in two, Lejre station is about midway. The route has a few sections through villages and along roads, but else it takes you over rolling farmland, through lush forest and past tranquil lakes. The section closest to Roskilde goes along Roskilde Fjord and the coastal meadows there. The most beautiful part is probably through the Bidstrup forests and past Avn Lake (pictured). The peculiar name, Skjoldunge (in English Scyldingas), refers to the descendants of the mythical King Skjold, who is mentioned in the Icelandic sagas. However, excavations of several impressive royal halls (similar to the replica at Sagnlandet) do show that the land of the National Park of Skjoldungerne was once reigned by great and powerful men during the Iron and Viking Ages, so perhaps the ancient king really did live here in the distant past.
1 2 3 4 5 6 7 8