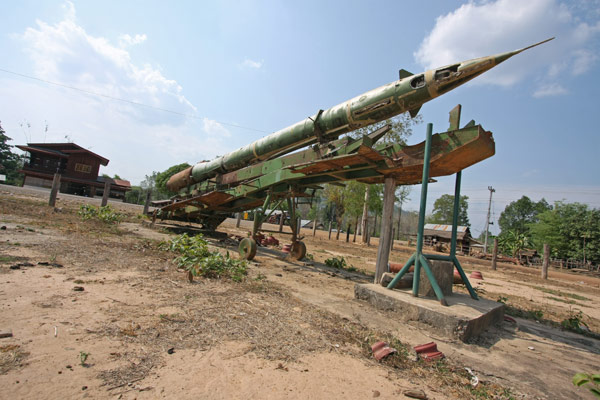 The Ho Chi Minh trail was not a single trail, but rather a network of trails and dirt roads that lead from North Vietnam to South Vietnam through Laos and Cambodia in the bloody years of the Vietnam War. The Viet Minh, who were based in North Vietnam and led by Ho Chi Minh, used it to supply their allies in the South, the Viet Cong, with arms and men, so they could fight the Americans and the South Vietnamese army. Since both Cambodia and Laos were officially neutral, the Americans decided to secretly bomb the area where the Ho Chi Minh trail went through. Just in Laos, the Americans dropped more than 2 million tons of bombs, making Laos one of the most heavily bombed countries in the world. Today there isn't much evidence of the Ho Chi Minh trail, but at the dirt square in Pa-am village you can still see a Russian surface-to-air missile launcher (with missile) that the North Vietnamese troops managed to drag down here.

On the banks of river Nam Ou 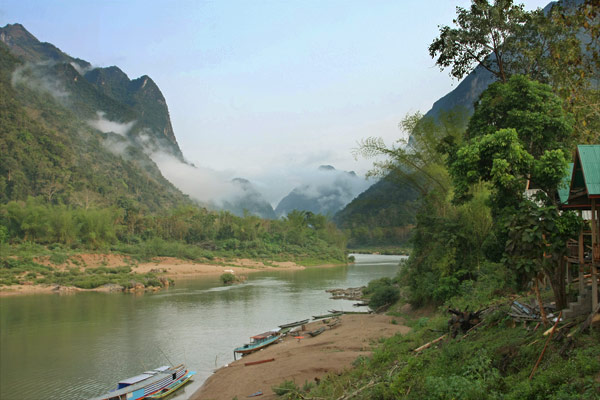 Muang Ngoi (or more correct Muang Ngoi Neua) is a little fisher village on the banks of Nam Ou River, which now doubles as a tranquil traveller hub. There is no access by road, only river, so the silence can be overwhelming - until the power generators kick in for a few hours in the evening and the roosters' early start in the morning. The village is spread along a single dirt lane and has a spectacular setting among rows of bubble-shaped mountains that disappear into the mist. There several caves in the area (Tham Kang and Tham Pha Kae) as well as a waterfall (Tad Mok). During the Vietnam War, the area was heavily bombed by the Americans in their failed attempt to destroy the Ho Chi Minh trail. Today, huge bomb fragments are used as morbid garden decorations and fencing. The little village is slowly evolving as an adventure destination with trekking, fishing, cave tours and the mandatory tubing on offer. 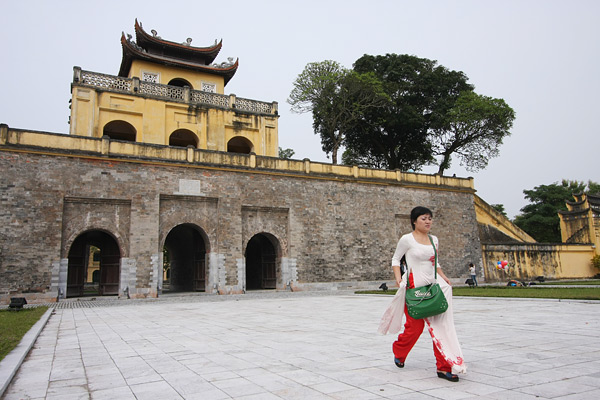 Hanoi is more than a thousand years old and was original called Thang Long (well, actually it goes further back). It was founded in 1010 and was the Imperial City for several dynasties during which it had the honor to be sacked by the Mongols, not just one time but three times. In 1397 the capital was moved, but Thang Long was kept as a region capital, a position it hold for another 490 years before it become capital for French Indochina. In the meantime the name had been changed to Hanoi (in 1831). Then came the Indochina Wars and not until 1975 was Hanoi again capital for a unified Vietnam.
During all that time the Citadel of Thang Long served as some sort of fortress or military headquarter. Up until recently the citadel was off limit, but then UNESCO added it to its list in 2010 and today the citadel has open its gates to the public. The complex contains a range of different buildings, including the imposing South Gate and a newer structure, a reinforced concrete meeting room used by General Giap during the Vietnam War. There is also a North Gate on Phan Dinh Phung St, but you have to walk around the military compound that is still in use today. Come during the weekend and you have a chance to witness Vietnamese wedding photo sessions.
> Hanoi guide
> More UNESCO sites, Asia 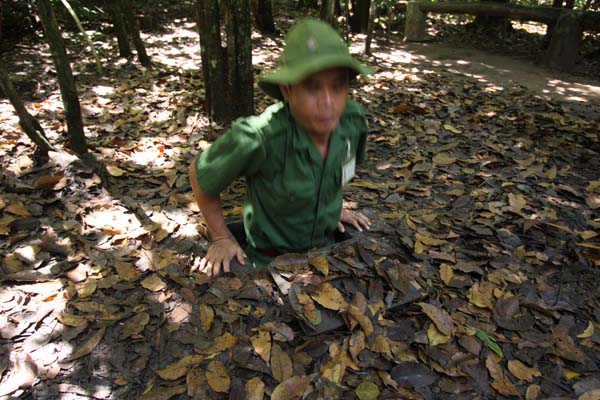 These are the tunnels that the Viet Cong used to fight the South Vietnam alliance - including the Americans - under the Vietnam War (which the Vietnamese, by the way, call the American War). Two areas can be visited, Ben Duoc and Ben Dinh. All the tunnels that are open have been expanded to fit western-sized people, but you still need to crawl on your hands and knees to get through them. Over ground, the sights have turned into a tourist circus with souvenir shops and shooting range (yes, you can shoot with AK47s), but the old-school propaganda video and the tunnels give a pretty good insight to the horror of the war.
> More underground places

On the route from Da Nang to Hue. 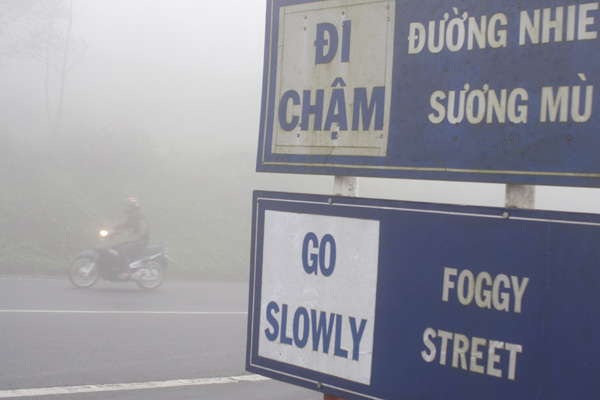 Hai Van Pass (496) north of Da Nang is the second highest pass in Vietnam, next after Heavens Gate near Sapa. It is a natural boundary between the subtropical North and tropical South Vietnam. During the French occupation and the Vietnam War, the pass played an important military role and to this day you can still see some bunkers at the top. Due to the special weather conditions, the view is rarely clear in both direction when reaching the top and the whole peak is often covered in clouds, hence the name Hai Van (meaning "Ocean Clouds"). In 2005, the Hai Van Tunnel opened, cutting straight through the mountain and eliminating the scenic, though scary, hairpin route over the pass. 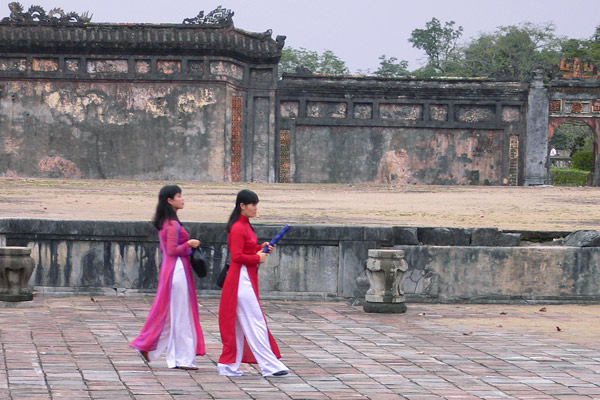 Under Nguyen dynasty (1802-1945) Hue was the imperial capital and home to the emperor's citadel. Even today the town has a more aristocratic feeling than other Vietnamese cities with its wide tree lined boulevards, ao dai dressed college girls, and imperial leftovers. Most of the forbidden city was destroyed during the Tet offensive in 1968 but have been under restoration the last many years. After too much imperial this and imperial that, walk down to the local market and get sucked back in time. Here goods are still transported in cyclos and the old ladies have colonial hats and black teeth. Though most travellers feel obligated to pay Hue a visit, it will rarely be a highlight of their Vietnam journey.
> More UNESCO sites, Asia 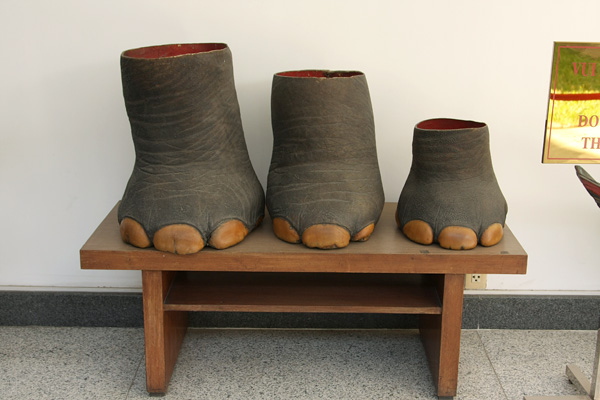 During the Vietnamese War the palace was home to the South Vietnamese President. When Saigon fell in 1975 to the North Vietnamese Army, a tank crashed through the gates and the NVA troops ran into the office to the waiting South Vietnamese president, who had only been sworn in days before. The North Vietnamese seized power and a long process started to reunite Vietnam, which involved reeducation of hundred of thousands of South Vietnamese who had supported the South Vietnamese government and their foreign allies. The palace, which was previously known as the Independence Palace, got renamed to Reunification Palace. Today it is a museum and the interior has been kept intact since 1975. You can see the president's office with strange decorations like elephant foot baskets and stuffed animals. The rooftop has a display of the helicopter evacuation done from the American embassy (which no longer exists) in the last days before the fall of Saigon.
> Ho Chi Minh City guide