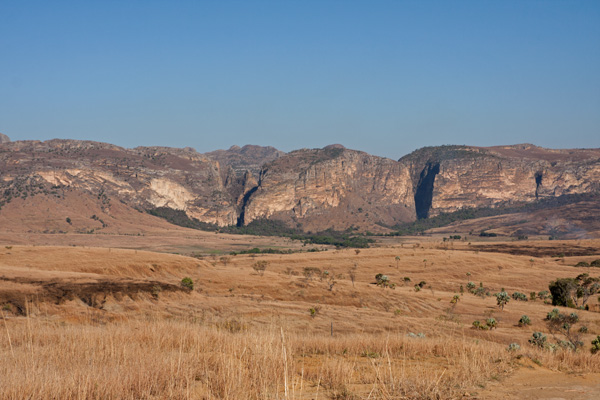 This national park is on everyone's itinerary when travelling down the Route Nationale 7 - the classic route in Madagascar. Out of the plains of Western Madagascar rises the Isalo massif. This arid plateau of mainly sandstone formations is home to several unique plants such as the Pachypodium. There are many deep canyons where you can find oases that bring with them a lush vegetation and pools with or without waterfalls that are great for swimming, especially after hiking in the hot climate. You can do day hikes of all lengths or explore Isalo more in depth on a longer camping trip. In and around some of the forests at the canyons there are also several species of lemurs such as ring tailed lemur, Verreaux's Sifaka and the Red-fronted Lemur. 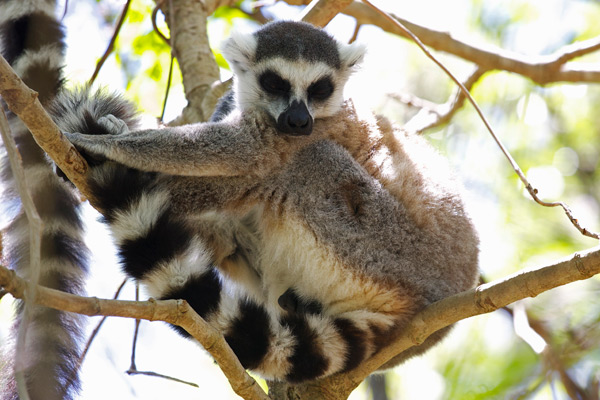 Sometimes it can be difficult to see lemurs up close since they of course are 'wild' animals and most species tend to live high up in the trees. At Anja park, a small park close to Ambalavao, some families of ring tailed lemurs have been living around a local village for a long time. A fady (Madagascar taboo, which can be any kind of local rule) forbidding them to be hunted has protected them here and the villagers have now turned the area into a local visitor park protecting the animals even more and creating a good income for the village. Since the lemurs live close to the people in this forest, they are used to you roaming around and taking photos. It is a great chance to observe them for a longer time, eating and lounging in the trees and if your are lucky, sunbathing on the ground.
> Photo gallery 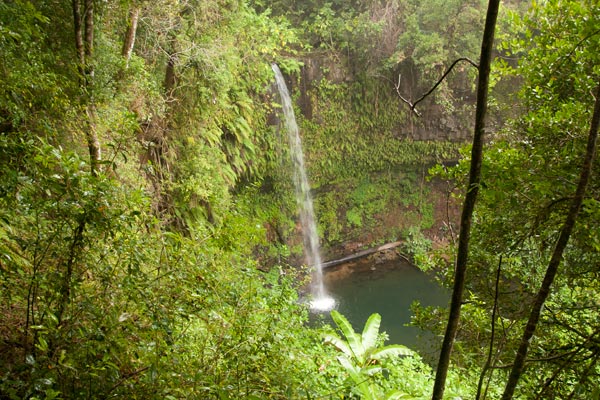 Only about 40 kilometres from Antsiranana (Diego Suarez), this national park makes a good day trip and also a good place to cool down from the heat of the city. At "Amber mountain", there is a microclimate with temperatures quite a bit lower and a high chance of rain, especially in the afternoon. There are several easy trails to beautiful waterfalls. The dense tropical (rain)forest harbours several species of lemurs. It is mandatory to have a guide as in all parks in Madagascar, which is a good thing because they are experts at finding the animals for you, which you probably wouldn't be able to do on your own. If you get a guide who drives with you to the park you'll probably be able to spot several chameleons on the way there.
> Photo gallery
> More national parks in Africa 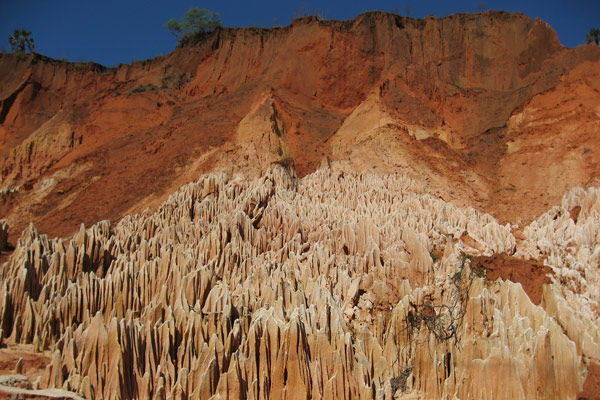 Madagascar is sometimes called the "red island". All over the country you can see the red earth rich in iron. While the other tsingy's (of Ankarana close-by and Bemara in the West of the country) are eroded limestone, the red tsingy is completely different. Rain and wind have eroded the red laterite earth creating beautiful white and red shapes. Especially on clear days, the clear blue skies contrast with the reddish pinnacles. It is highly recommended to make the effort of venturing out to the red tsingy, either on a day trip from Diego Suarez or on route to the Ankarana Special Reserve. You will most likely need your own 4x4 transportation as it is located about a one-hour off-road drive away from the main road.
> Photo gallery 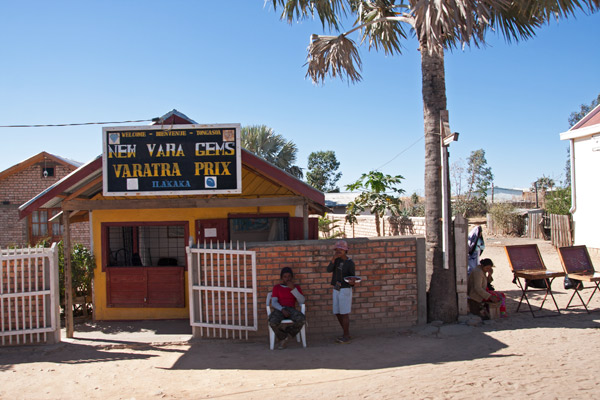 Before 1998, pretty much no-one lived in the plains between Isalo National Park and Tulear. Since the discovery of Sapphire, several towns have appeared and the area has become the "Wild West" of Madagascar. People are attracted here seeking fortune, something that only a few will ever find. They work in the mines and only get paid with whatever they dig up, much like during the gold rush in Northern America. The biggest town of these, Ilakaka, has evolved from a gathering of wooden sheds to a town of over 20,000 people with shops, brothels, places to gamble and even some big mansions for the few that did find their fortune. Security has improved a little but it is still definitely not a town to linger in and even better to be avoided all together at night since the crime rate is very high.
> Photo gallery

Madagascar has about 20 different ethnic groups. The Vezo people live at the coast in the West of the country, pretty much the region around and North of Toliara (Tulear). Their main activity is fishing. Every day, the Vezo people take their sailing pirogues, which are wooden dug-out canoes, out to the reef and beyond and mostly return about mid-morning with their catch of the day. The Vezo people are skilled sailors and fishermen and it is fascinating to watch them navigate their boats to shore and seeing the crowds of people getting in the fish and seafood. At these moments there is a market atmosphere with sometimes quite a bit of fuzz.
> Photo gallery
> More tribes 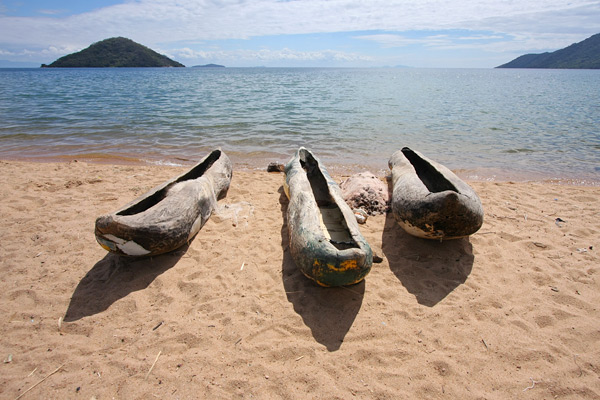 At the tip of a peninsula at the bottom of gorgeous Lake Malawi lies adorable Cape Maclear. The rural village has been a favourite of backpackers and overlanders for decades, and for a good reason. Green mountains make up the inland while the lakeshore is blessed with a narrow sandy beach. The village is a one lane place with shady baobab trees. The men go out on the lake for fishing in small canoes, while the women are constantly washing at the edge of the lake, with playful kids everywhere. The main event of the day is sunset, when the sky turns bright orange before the sun burns out behind the hilly horizon across the lake. Be prepared with the cold drinks for the spectacle is rather short. Afterwards, the night gets filled with African rythms pumping from the small bars along the beach.
> Photo gallery
> More beaches in Africa

Maputo is a wonderful mix of worn Potuguese colonial leftovers, concrete mansions, palm lined avenues and a few high-rises here and there - and lots of potholes. It has a beautiful seaside location with a long beach (Costa do Sol) within chapa (minibus) distance, but also a fair share of scruffy areas. Downtown is bustling but never hectic, and the central market is colourful and surprisingly small and tranquil. There are street cafes on the main avenues and small shack bars with plastic chairs that spill onto the side streets in the afternoon. Maputo is known for its friendly vibe and has enough charisma and character to charm anyone who chooses to explore the city for a couple of days.
> Photo gallery
> More African capitals
1 2 3 4 5