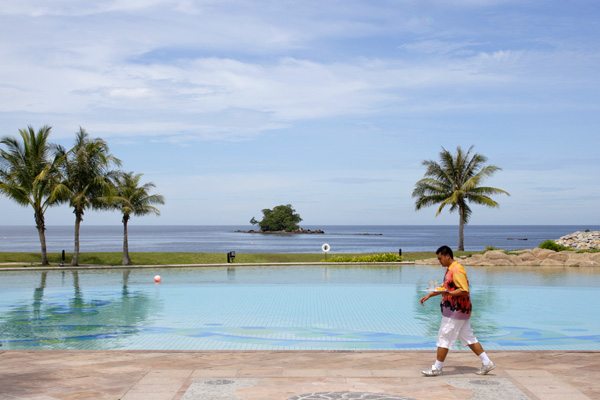 Normally, we don't do hotels here at Globe Spots, but when the construction price tag is in the US$1 billion region, it qualifies. Every part of this hotel is built with the best materials, and the foyer is 80 metres high. All this splendidness is the brainchild of the black sheep of the royal family of Brunei, Prince Jefri. A lot of things can be said of Jefri, but before he got sacked as finance minister, he had wasted billions on personal expenses, including gold-plated toilet brushes, 2000 cars and a yacht named Tits, with two tenders called Nipple 1 and Nipple 2. If that isn't class, we don't know what is. 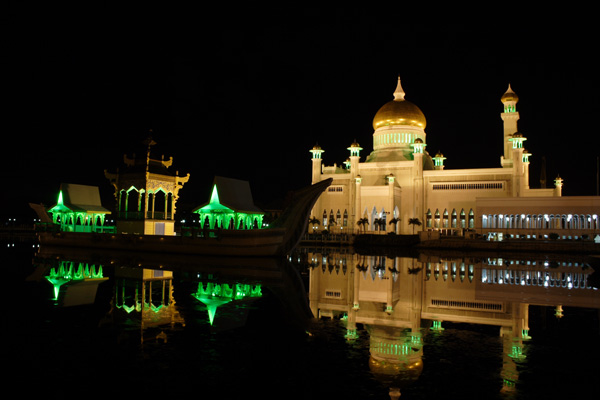 A tasteful and modest piece of architecture that shows what oil money can buy. It was built in 1958 with the finest materials from all over the world; marble from Italy, stained-glass and chandeliers from England, granite from China, carpets from Saudi Arabia and a golden dome. In the artificial lake stands a replica of a royal boat. It's clearly the city's proud landmark and is considered among the most beautiful mosques in the world.
> More great mosques 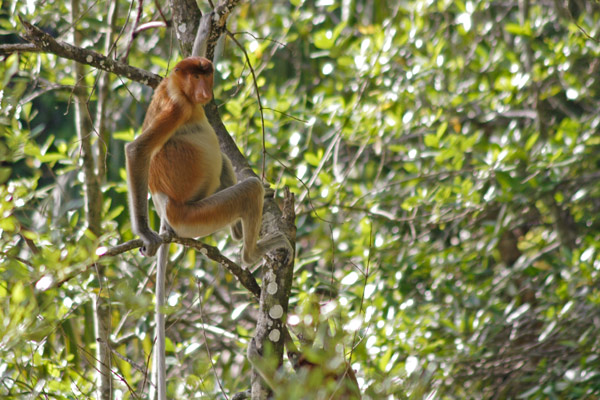 The Proboscis monkey is the largest monkey in the world and is a seriously threatened species that only live in Borneo. There are an estimated 20.000 left and, surprisingly, Brunei is the home to half of them, where they live along the banks of Brunei River. The males are easily recognisable with their potbellies, big blobby noses, and permanently erected penis (we kid you not). They are quite shy and keep to the shadow during the heat of the day, so the best time to observe them is at dusk along the river bank. 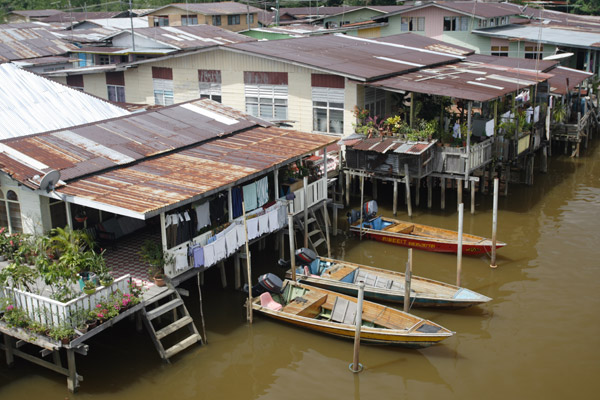 Brunei River, which snakes through the capital, is home to about 30.000 people who live on stilts in water villages. Neighbourhoods are connected by a maze of wooden walk boards balancing several meters above the water level. Longer distances are done by zigzagging water taxis that shuttle between the city and the villages, and every point in between. Some have called it The Venice of the East, though that might be stretching it a bit too far, but it's probably the liveliest area you will experience in Brunei. 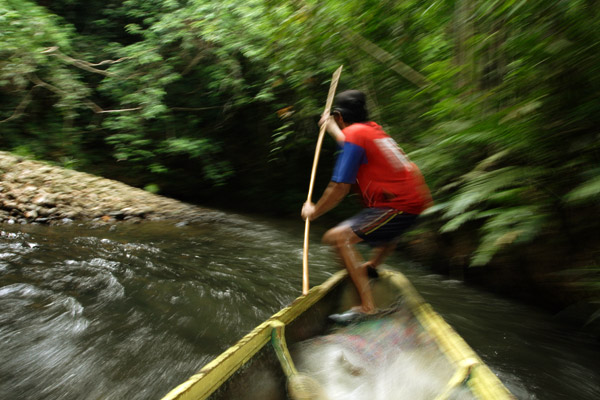 Sarawak's touristic profile could easily have been designed based on this tranquil and lush national park. Jungle cruising in canoes on bending rivers, spotting orangutans (or maybe just their nests) while trekking, swimming under cool waterfalls, and longhouse stay with the friendly Iban people are the attractions here. Bookings need to be made from Kuching and longer expeditions deep into the jungle are possible, which will only increase the chances to see orangutans, gibbons, hornbills, and other wildlife.
> Sarawak guide 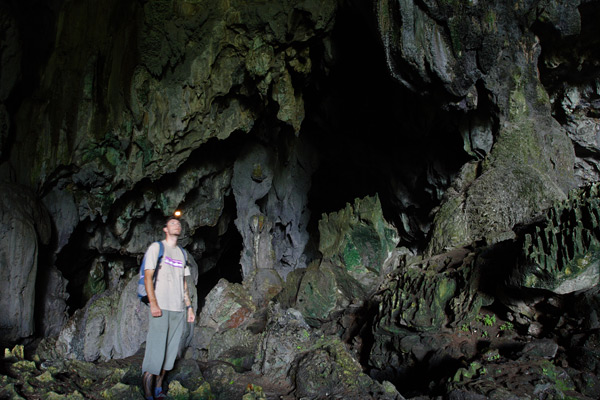 The limestone hills around the smal village of Bau are holed like a Swiss cheese. Most caves are hidden and should only be explored with proper caving equipment, but two caves are easily accessible, namely the Fairy Cave (picture) and the Wind Cave, about 6 km apart outside the village of Bau.
The Wind Cave (Gua Angin) has its fair share of stalagmites, stalactites, and pillars, but is particularly known for swiftlets and bats. A boardwalk runs the length of the cave, while a small river meanders at the bottom. A cool breeze blows, earning the name to the cave.
The Fairy Cave (Gua Kapor) is a totally different story. The cave entrance is 30 metres up, accessible through a flight of stairs in a concrete tower. The cave has been a place for prayer throughout times and there are several shrines in here. The cave is huge, a lot bigger than the Wind Cave, and though there are boardwalks here too (well, concrete stairs), you can go exploring the dark parts on your own. Just remember to bring a flashlight.
> Sarawak guide
> More caves

© Charlie Ryan
The iconic image of Borneo is a zoo like forest with big trees and an ecosystem teeming with life. Danum Valley gives you exactly that. Danum Valley is made up of 438 square kilometres of protected forest. It has the highest concentration of orangutans in the world, pygmy elephants, clouded leopards, and many more animals. Staying at the research centre is amazing because at the restaurant, you can converse with scientists that are studying the ecology of the forest. Very helpful if you have questions about the Bornean rainforest. There are many activities to keep you busy there from trekking to waterfalls to doing night safaris through the jungle. Bring some leech socks because it is a very healthy rainforest, and so that means lots of leeches! Go to the ridge observation tower for sunrise and watch the clouds burn off from the forest as the day starts. We guarantee it will be something you will never forget.
> Sabah guide
> Photo gallery
> More orangutans 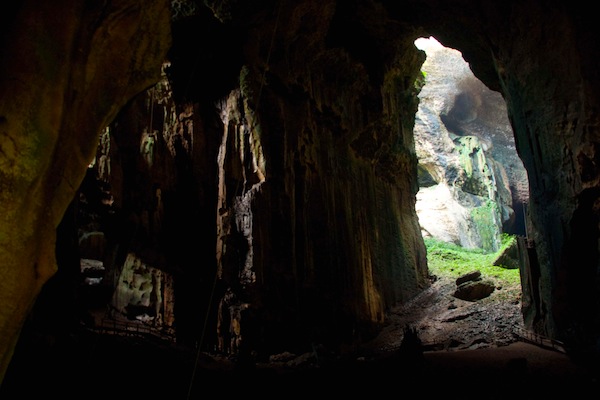 Gomantong Caves appear to be the mother of all caves. With a ceiling 90 metres above head, and the millions of swiftlets and bats living in them, it is quite a spectacle. The main chamber is huge, and for further adventure, you can head to the upper chamber which involves some serious caving to see. There is an elevated walkway around the main chamber - a relief because it keeps you off the mountain of bat guano beneath. Bring a flashlight and a set of nerves if you don't like insects. The guano attracts cockroaches by tens of millions, along with long-legged centipedes, and many more creepy crawlies.
> Sabah guide
> More caves 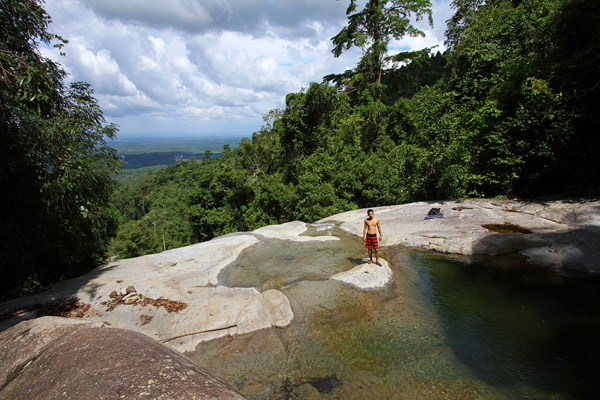 Jangkar Waterfall is a multi-level waterfall set in the dense jungle close to the Indonesian border. It's a true nature gem with big boulders, deep drops, and emerald green jungle pools to cool off in after the strenuous, and at times neckbreaking, climb up. There are apparently 23 levels, whereof level 1, 2 and 7 are the most spectacular. Getting to the top (and back) is an overnight adventure. Jangkar Waterfall is not easy to get to. First, you need to get to Kampong Jangkar, which is bit of a journey itself. There you can find a local guide who will lead you through people's gardens, small pepper and rubber fields, and lush jungle before you reach the bottom of the fall. If you have a motorbike - and you dare - you can do the first part of the trek towards the fall on wheels, which is stupid but lots of fun.
> Sarawak guide
> More waterfalls 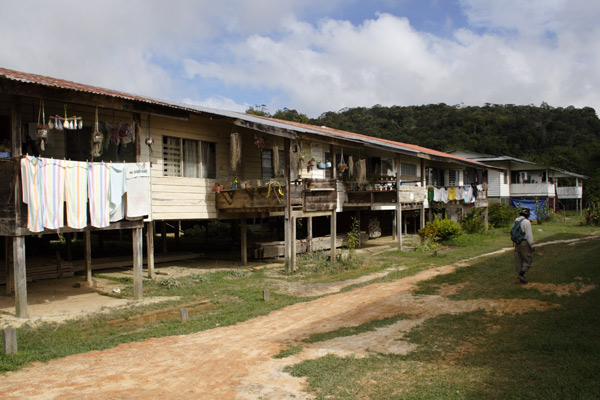 Deep in the jungle close to the Indonesian border lays the friendly Kelabit Highlands. Located on a plateau 1000 m above sea level surrounded by rugged terrain, it is only reachable by plane or a seven-day trek through dense forest. The main settlement, Bario, is still famous for its longhouses that can house up to thirty families under the same roof. Some of the elders still carry the heavy brass or hornbill-ivory ear rings and have their arms and legs covered in tribal tattoos. Homestays and multi-day treks are what the few travellers come here for in this nature rich corner of Sarawak.
> Sarawak guide
1 2 3