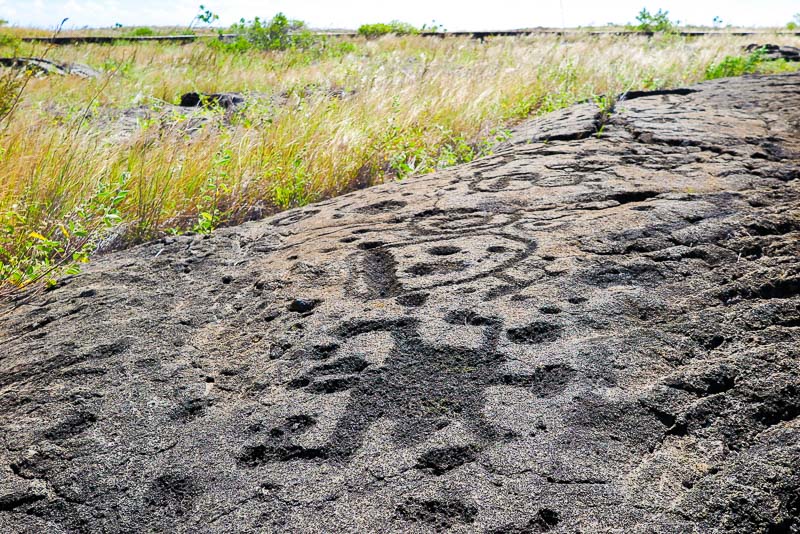 This petroglyph field is located within the Volcanoes National Park almost at the end of Chain of Craters Road. You have to hike 1.2 km over rugged lava fields to reach the collection. There is a boardwalk to protect the petroglyphs. Like the other petroglyph fields on Big Island not much is known about them.
> More rock art 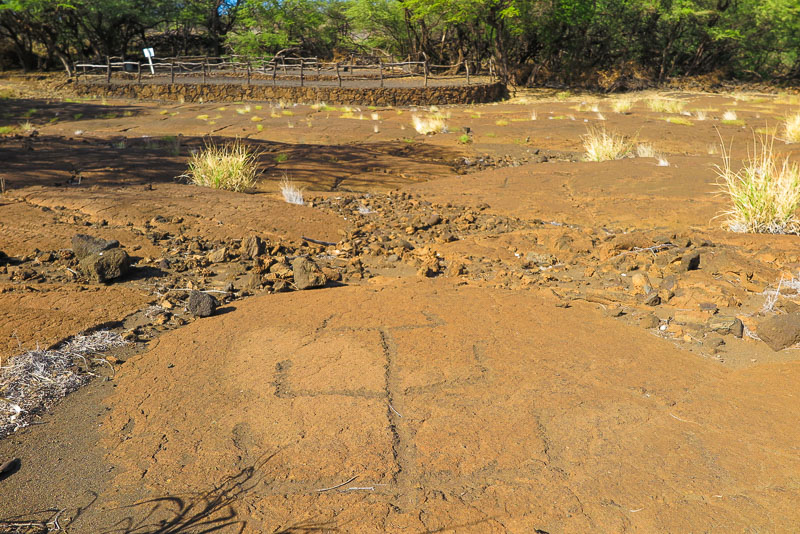 The petroglyph field at Puako features more than 3,000 ancient Hawaiian rock carvings, depicting humans, animals, tools and symbols. Nobody knows for sure when they were carved, but probably between 1000 and 1800 AD. Getting to petroglyph field isn't obvious. From the parking lot at the beach follow the paved trail to a small collection of replica petroglyphs. Then continue by following the rugged trail through the "enchanted" kiawe forest. You will eventually reach the viewing area of the real site.
There is another petroglyph field not far away at Waikoloa (10 km).
> More rock art 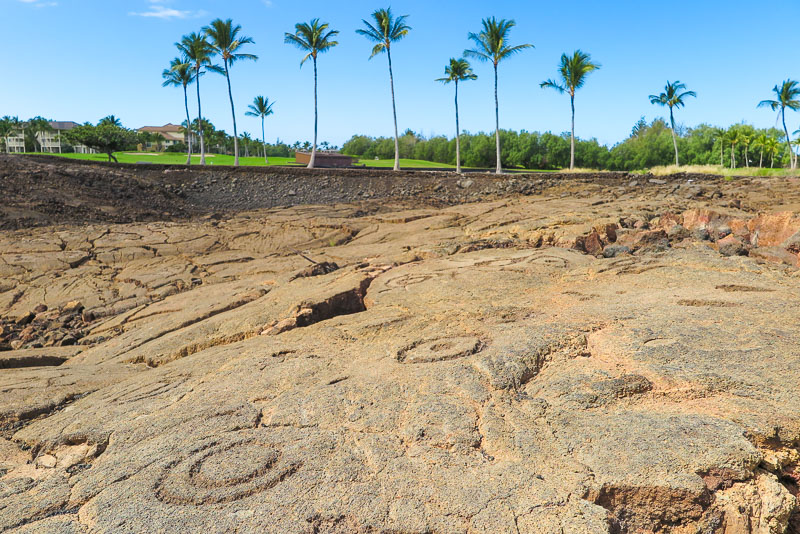 This rich petroglyph field is set among resorts and golf courses. It's an open area with lava slaps filled with mostly geometric patterns and symbols, but there are humans, canoes and animals too. Like the other sites, nobody knows when they were carved, but probably between 1000 and 1800 AD. "Newer" rock carvings have also been added after contact with the Europeans (English initials and horses).
There is another petroglyph field at Puako a short drive away (10 km).
> More rock art 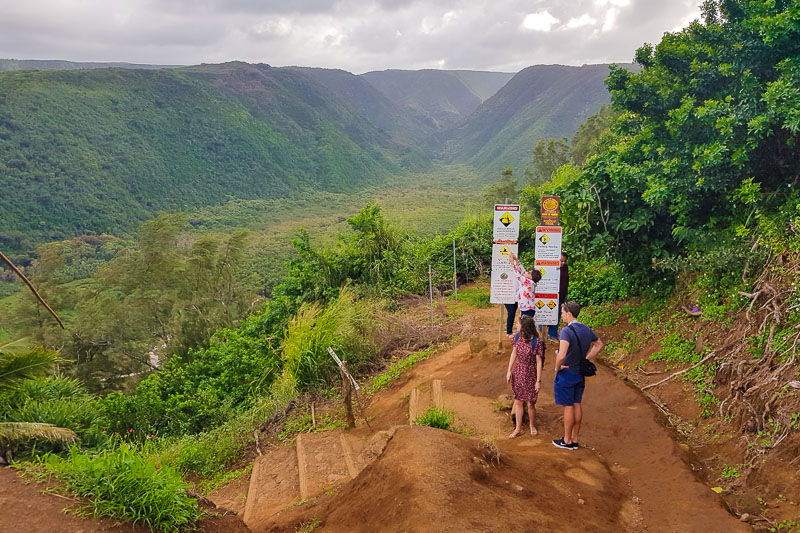 The Pololu Valley Lookout is a mandatory stop on the scenic Kohala Drive. The road ends here in a row of parked cars. Most visitors just enjoy the spectacular views over the green vegetation lined Pololu Valley, but a trail leads down to the valley floor 150 meters below. Those who hike the 20-30 minutes down will be rewarded with a secluded black sand beach (though swimming here is dangerous). 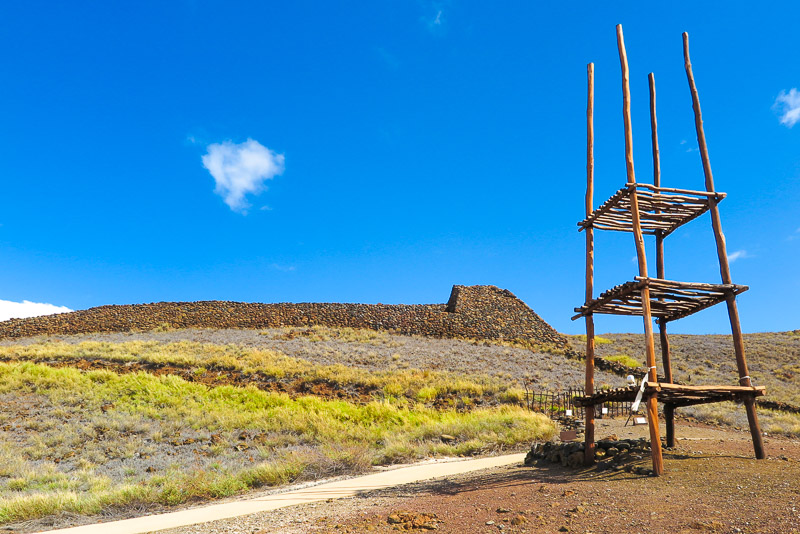 This is one of the best-preserved and most significant ancient temples in Hawai'i. It was built entirely by hand, with no mortar, in just one year during 1790 by the ruler Kamehameha. He dedicated the temple to the Hawai'ian war god Kukailimoku to help his quest to unite the Hawai'ian Islands. Not a bad move considering he did manage to unite the Hawai'ian Islands in 1810. The name Pu'ukohola means "Hill of the Whale", maybe referring to the fact that humpback whales can be spotted during the winter and spring months - even today.

© Charlie Ryan
If you like snorkelling or diving, Puako is the place where you will find serenity in Hawaii. A healthy, protected marine reserve awaits you under the water. Literally hundreds of turtles live along the reef, and they congregate in specfic areas for their cleaning. Along the reef, you can see turtles allowing schools of fish to eat all the parasites off their shells, an amazing site to see. White tip reef sharks, morey eels, and garden eels are also frequent residents of the Puako Reef.
> More sea turtles 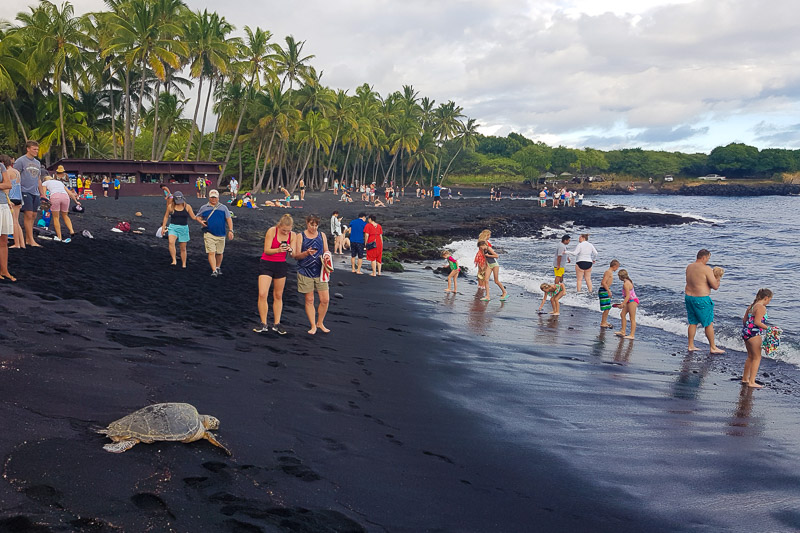 Though Punalu'u Beach is set on a beautiful backdrop of tall coconut palms, its most striking feature is the raven black sand. The beach is almost as popular with resting sea turtles as it is with sunseeking tourists. Remember to enjoy them from a distance - mind you, the sea turtles.
> More sea turtles 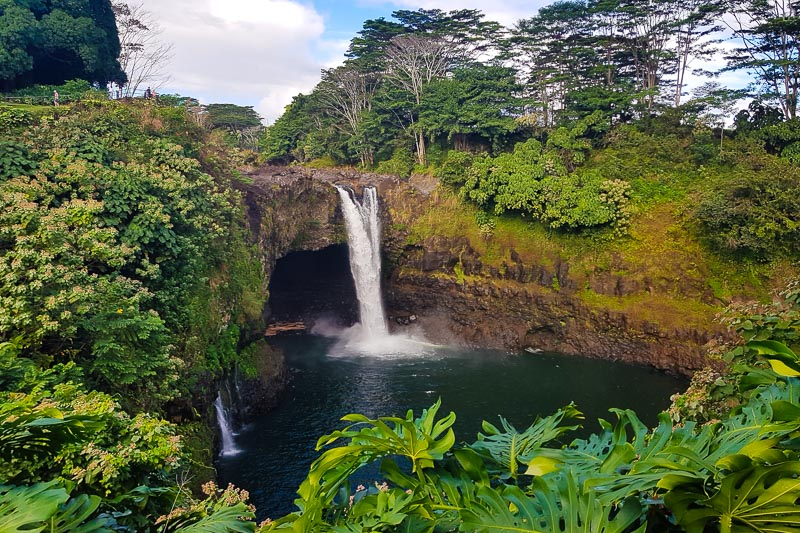 Gorgeous Rainbow Falls is set among tall trees and green vegetation. The waterfall plunges 24 meter down over a lava cave into an emerald green pool. Two viewing platforms are offering breathtaking views from various angles. Come in the morning for a chance to see rainbows.
> More waterfalls 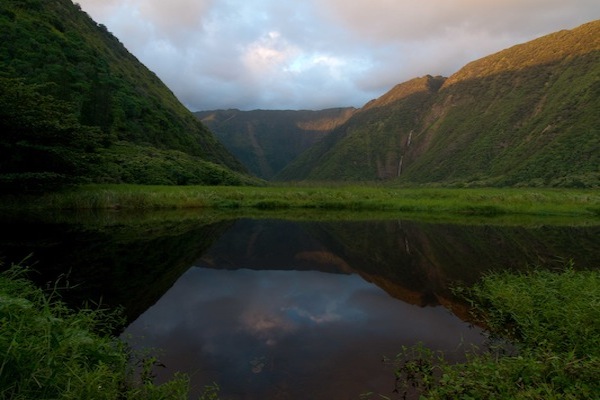 Another gem of the Big Island is the Waimanu Valley. The only drawback is it requires a difficult full day 16 km (10 mi.) hike. There are ten campsites that sit along the black sand beach and it is the perfect place to relax for a few days. You access the trailhead from the Waipio Valley. If you are in the valley after a good rain, the valley walls will be covered with waterfalls that drop from 700 m (2,300 ft.) above the valley floor. If raining, caution is required because the trail to the valley floods easily becomes hazardous to hike.
> More trekking 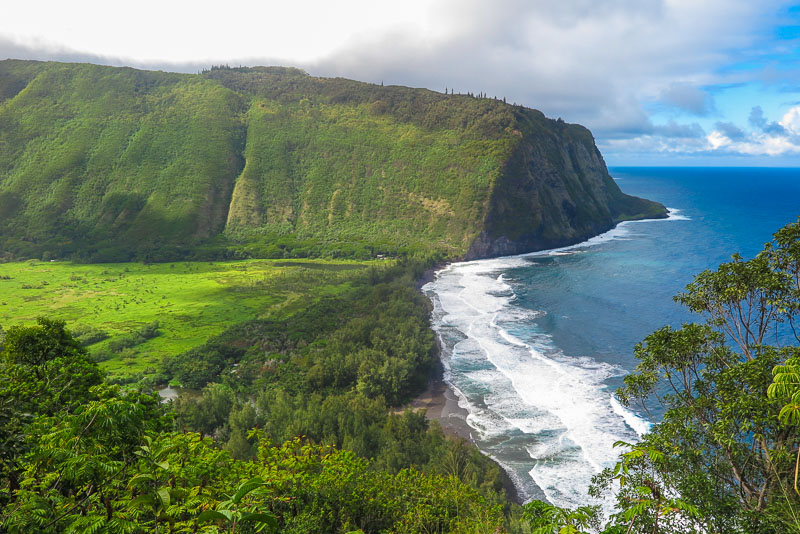 Waipi'o Valley is enclosed by steep cliffs and fringed by a black sand beach. It was once densely populated and home for the kings of Hawai'i, but today you only find a few houses, taro fields and waterfalls - including Hi'ilawe Falls, the tallest in Hawai'i with a drop of more than 400 m. The sweeping views from the lookout is amazing, but it gets even better if you follow the crazy road down. Keep in mind that the road is one of the steepest in Hawaii with a grade of up to 40%, so walk or go with a 4x4.
1 2